Kids spending too much time in front of screens? (For the majority of you, we already know the answer.) Technology is not inherently evil of course, but some forms can enable a certain…passivity, shall we say (?) that can drive a parent crazy. Teknopolis, a new, interactive, multi-space digital arts installation is coming to show kids (and adults) how technology can be used for good — not just vegging out. 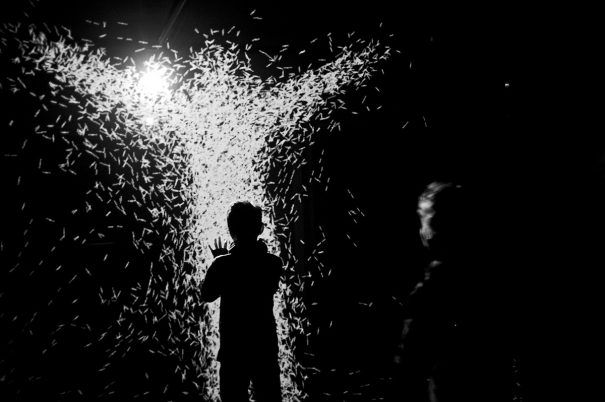 BAM! It’s Teknopolis!
A three-week-long digital art installation experience (that admittedly, looks a little trippy) Teknopolis will take over the Brooklyn Academy of Music’s BAM Fisher Building. The tech arts showcase, named for the Greek words Tekne (craft or art) and Polis (city), will feature the work of local and international digital artists and technologists, including Virual Reality selections curated by the Future of StoryTelling.

The 90-minute experience was curated by BAM’s Director of Education and Family Programs Steven McIntosh with the goal of inspiring the next generation of young people to push the boundaries of art and ideas. All of the experiences in Teknopolis have been selected because they evoke an immersive performing or visual arts experience for the participant,” says McIntosh. “Art reflects life, and as digital technology becomes a bigger part of our lives, we need our young people to recognize it as something they can wield creatively and not just consume.”

Well, Not All Young People
Take note: Organizers state that Teknopolis is limited to children ages six and up, and is not appropriate for younger audiences. (Fair: It does seem like something that would overwhelm the very little.)

What to Expect
Dancing via large-scale stop-motion animation, digital dandelion seeds that respond to visitors’ movements, and a new way to “draw” from Google are just a few of the Teknopolis‘ tricks. Here’s a sneak peek at what lives in the city of the future. 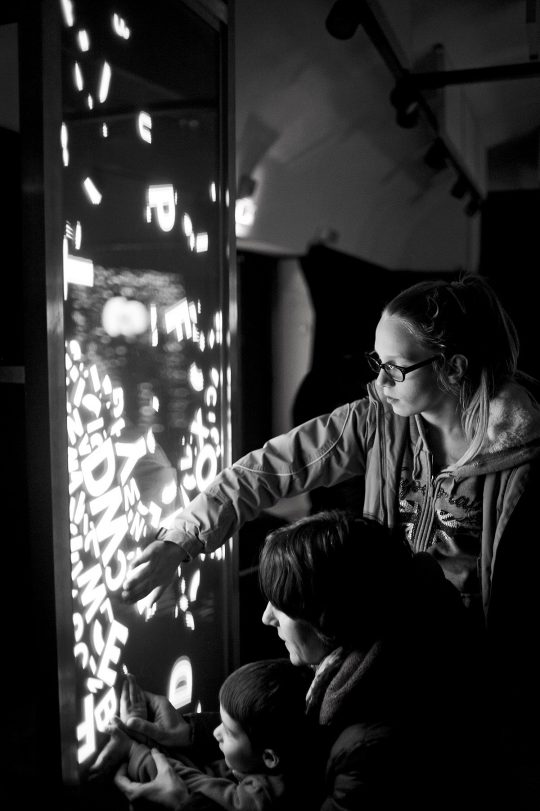 XYZT, Abstract Landscapes by Adrien M & Claire B
Visitors will walk through this series of installations, which the creators describe as “a dreamlike territory on the border between visual arts and performing arts.” Guests are invited to play with light, engage with vibrant virtual material and have fun with creative gesture and dance. Expect raining letters, grains of sand in motion, shifting clouds that take the form of a person’s silhouette, a tree made of letters and an “aquarium of shapes.” (Whoa.) 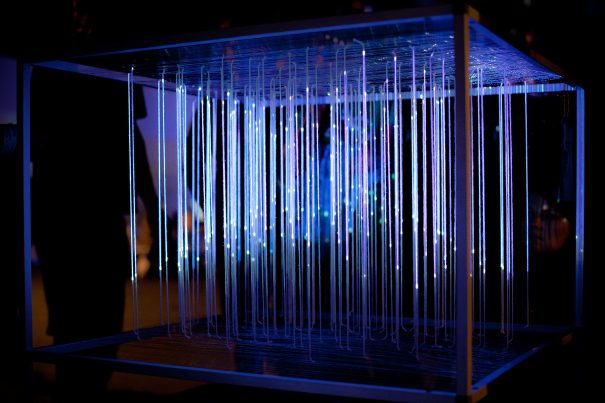 Lumarca by Matt Parker and Josh Holtsford
Housed in the balcony of the Fishman Space, Lumarca is a five-by-five-foot volumetric display that presents the digital avatar of the user. Once activated, the avatar persona inside the box will mimic any movement the person makes. In addition to being a captivating light sculpture, Lumarca is open source and open hardware, meaning the system requires only a computer, a projector, and common materials found at most hardware stores. (Also meaning you may have one in your house soon..) 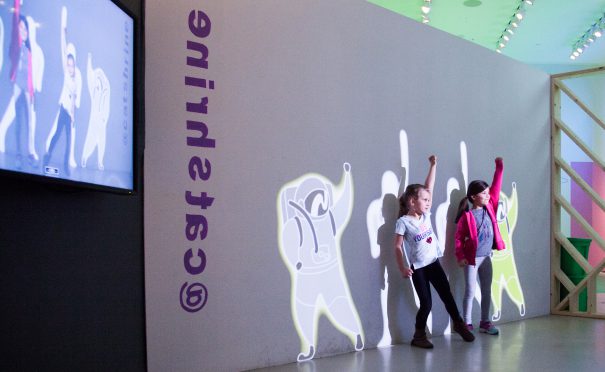 Pop n’ Lock Dance Machine by Catshrine
Found in the lower lobby, The Pop n’ Lock Dance Machine enables anyone to get down with rhythm and style thanks to an innovative blend of animation, projection and music. Participants choose their dances from a number of iconic moves, select their back-up crew from the ever-growing catalogue of animated characters, and strike a pose. 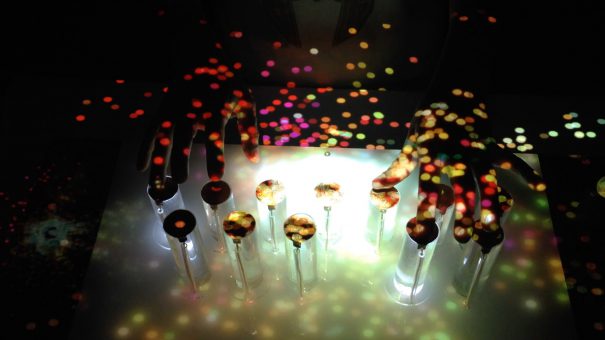 EXP. INST. RAIN by Balam Soto
Demonstrating a relationship between touch, sound, and projected images, this interactive installation and experimental instrument incorporates projection and sound generated by a wireless box made of wood, plexiglas, Arduino (an open-source electronics platform), electronic components, and custom touch sensors. By touching the box at various points, participants create different sounds; these sounds then generate changes in the projection. 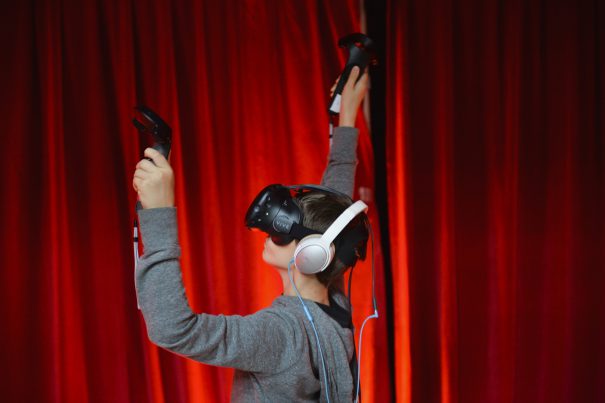 Google Tilt Brush by Google
This installation by Google allows the user to paint digitally in 3D. You can paint the space all around you with Tilt Brush: Use fire, ink, stars, snow, and even light to bring your wildest ideas to life in this entirely new medium.

Job Simulator by Owlchemy Labs
In a world in which robots have replaced all human jobs, Job Simulator uses virtual reality to let users experience what it was once like “to job.” Owlchemy Labs is an creative game studio based in Austin, Texas, dedicated to creating polished and unique games and VR experiences.

Turning Forest
Directed by Oscar Raby and written by Shelley Silas; Produced by BBC Research & Development and VRTOV
Turning Forest is a virtual reality fairytale told in real time. Audiences are invited into a magical space of imagination, music, and transformation, where rustling leaves are also the footsteps of something familiar, yet strange. (Users must be 13+ years of age.)

When the iPad is lying down, the work function as a normal, digital book, with the option to have it read aloud. But when held upright, the iPad becomes a sort of window into the world of the story, where readers can be immersed and move around in 360 degrees. Through the clever use of sensors, Wuwu & Co. keeps readers actively engaged in the story, while they help the odd creatures of the forest during the coldest winter in 2,000 years.

Rain or Shine
Produced by Nexus Productions and Google Spotlight Stories
Directed by Felix Massie, this virtual reality experience explores the story of Ella, a girl determined to wear her new sunglasses on a beautiful summer day in London. Using VR technology, the viewer experiences this story in 360 degrees—the sun is shining, the birds are singing, and there’s a spring in everybody’s step. As users watch the video on a mobile device, they can move the device around to view different parts of the action as it unfolds, as if controlling the camera.

INVASION! by Baobab Studios
From the director of the animated hit Madagascar, Invasion! is a colorful VR animated short about a small alien invasion led by a duo of extraterrestrials seeking world domination. The aliens arrive expecting resistance at first contact but instead are met by two of the friendliest (and softest) animals on the planet — a pair of bunnies. The viewer experiences the story from the perspective of one these fuzzy earthlings.

Will you be heading to Teknopolis? What are you excited to see?