Just Opened: Roll Into History on The Downtown Experience

If you walk the streets of midtown and pay even the slightest bit of attention, then you probably know “The Ride.” A giant, black bus with huge windows that’s emblazoned with the words “The Ride” in a fiery font, it’s hard to miss. And it would be understandable if, upon seeing it, you dismissed it as a strictly-for-tourists thing, whatever it is. We’re here to tell you the latest production rolled out by the company, The Downtown Experience, is not! 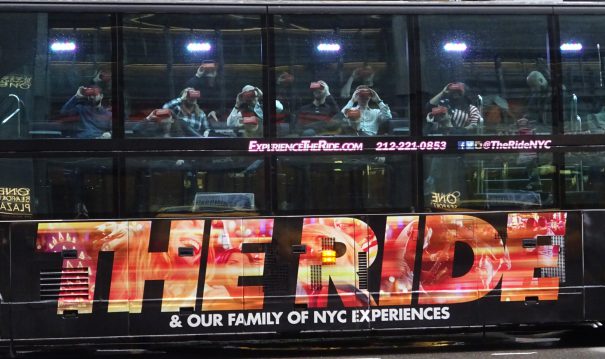 The Ride 101
For the uninitiated (which included us until last week), the concept of The Ride  — and its assorted spinoffs, of which The Downtown Experience is one — is a bus outfitted with stadium seating facing floor to ceiling windows.

The bus makes its way around an area of New York, with an on-board guide giving a tour of what’s on view on the other side of those windows, with supporting media like music, images on LED screens and (the extra groovy part) “Virtual Reality Visualizations” experienced via VR headsets. 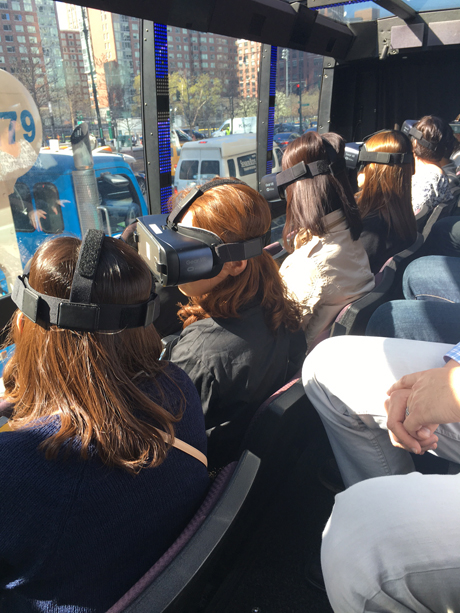 The Downtown Experience
The latest production from The Ride, “The Downtown Experience”, premiered on May 8, and takes passengers on a journey around the area that gives the show its name. The mobile, tech-infused tour rolls through the Seaport area, Battery Park, Wall Street/FiDi, with the onboard guide pointing out landmarks and highlights along the way. 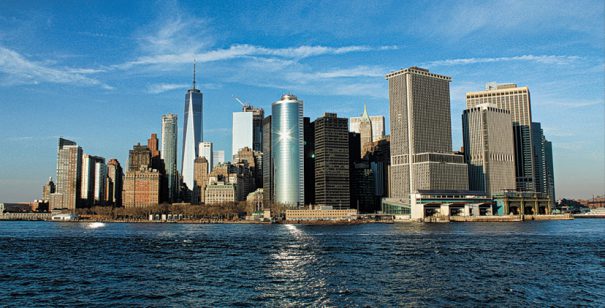 Experiencing The Downtown Experience
The Downtown Experience actually begins off the bus, at the corner of Water and Fulton, looking down toward the stone plaza of the Seaport. It’s there you meet your guide (ours was the perky and likable Rachel), who sets the stage for a tour of one of the oldest parts of Manhattan, or Mannahatta, as the Native American tribe (and original inhabitants of the then wilderness island) the Lenni-Lenape called it. (A nearby “busker” gets involved in the action in a little bit of surprise street theater; he then boards the bus with everyone and kicks things off with a “The Ride”-themed tune.) 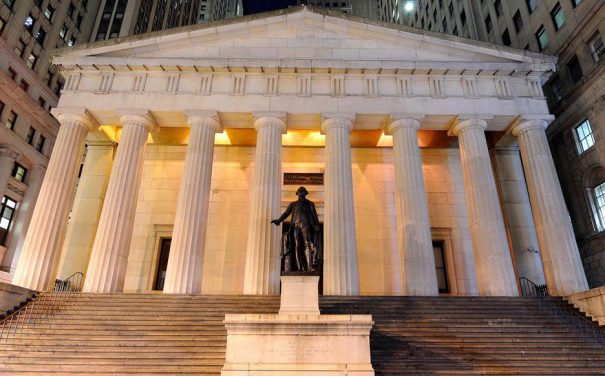 Real History, Real Info
If you’ve ever done a double decker bus tour in the city (we have), you know the quality of information offered can be, well, inconsistent. The Downtown Experience is not that.

Rachel really knew her stuff, and while she seemed to be working from a rough script, she also clearly had spent many an evening studying the history of the ground she was covering, and beyond. (Case in point: when someone asked the origin of the name “Hell’s Kitchen,” she was ready with the answer.)

Among the many topics covered along the 90-or-so-minute journey are the Dutch discovery of Manahatta, the Seaport as the first “world trade center”, the Brooklyn Bridge, Castle Clinton, Battery Park from creation to revitalization, immigration (a big theme), architectural styles, Federal Hall (where George Washington was inaugurated when New York was the nation’s capital), SoHo, Wall street and ticker tape parades, the Wall Street Bull statue (and Fearless Girl), Bowling Green Park, City Hall and much more.

That sounds like a lot, and it is, but the information, on the whole, was always interesting and never felt overwhelming, a nice mix of general history and intriguing trivia. We’d bet even the most seasoned New Yorkers would learn something on this bus. (We did!) 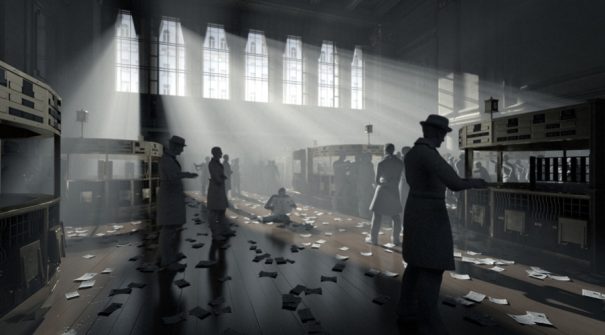 A still from the Virtual Reality experience of Black Tuesday, 1929; The Downtown Experience

The VR
Every once in a while, passengers are told to don their Virtual Reality headsets for an even deeper dive into a certain location or topic. It sounds gimmicky, and it kind of is, but for the most part, it also works, driving home that these events really happened right here, to real people.

VR experiences include arriving in New York’s port as an Irish immigrant, flying around the top of One World Observatory (pretty spectacular), “witnessing” the 1929 stock market crash on Black Tuesday and standing among the crowd waiting for General George Washington to enter Federal Hall on the first inauguration day. 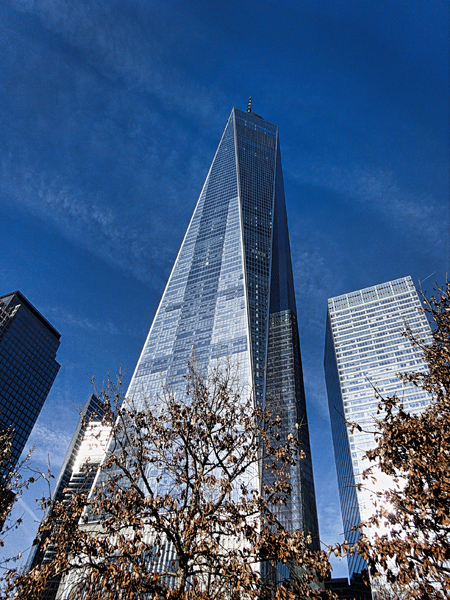 Best for Older Kids
The Downtown Experience is best for older kids, not only because they are most likely to be engaged by the information, but also because of some sensitive subject matter. Of course, you can’t talk about downtown without talking about 9/11, although the way the tour addresses the topic is both novel and not too heavy handed. Additionally, the tour highlights the African Burial Ground National Monument, where the remains of 419 African slaves (including children) were found in a mass grave in 1990.

Do you have a favorite NYC tour? Share it in the comments below! 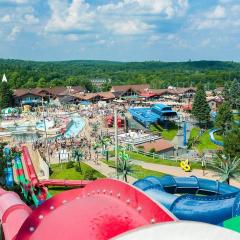 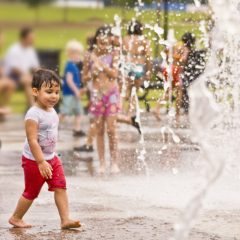 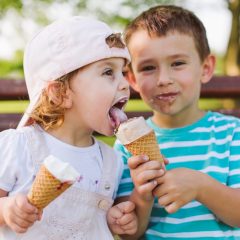 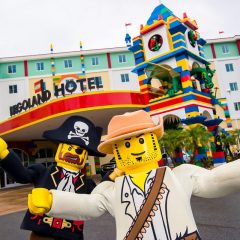 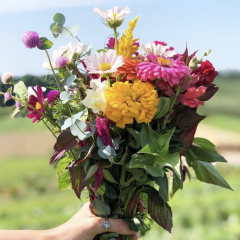 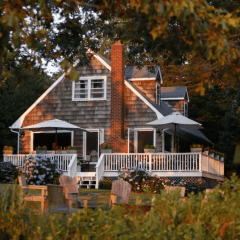 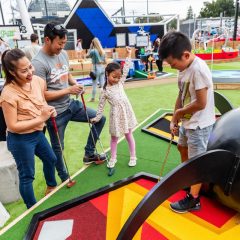 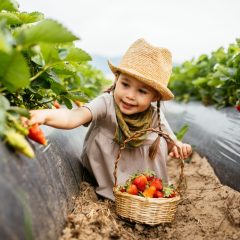 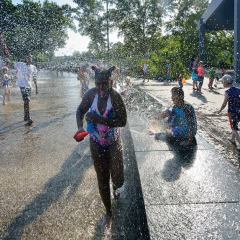 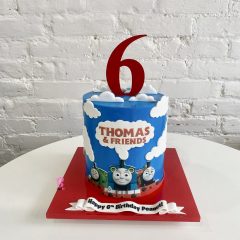