There’s a long, hot summer looming (even if current weather suggests otherwise). With kids out of school, that’s a bunch of hours to fill. Even for parents reassuring themselves that they’re all signed up for summer camp – remember the weekends! Obviously, you want to spend as much time outside on nice days as possible. But what if it’s too hot? Or what about those sudden summer thunderstorms that come out of nowhere and trap you under the nearest awning? Luckily, NYC families have two new options to try out this summer for eating and shopping fun, both inside and outside. 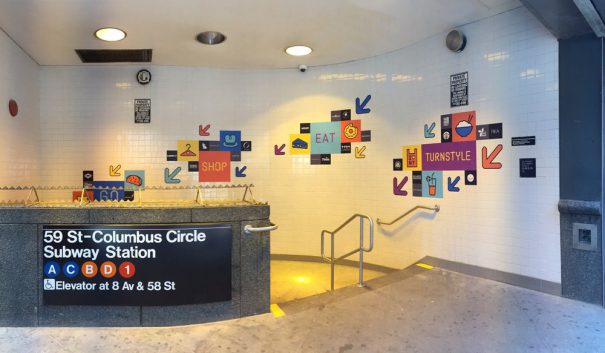 Brands Down Under: Turnstyle
You may recall the long, dirty, somewhat ominous hallway underneath the Columbus Circle subway station leading out to 57th Street? Well, it’s gone!

That space underwent a complete overhaul and it now houses Turnstyle, a brightly-colored, retail corridor — complete with mirrored ceilings — packed with 24 shops and 10 restaurants.

In the market for some stationery so you can jot down thank you notes during your commute? Pop into Papyrus! Want to wash the smell of subway off as soon as you make it home? There’s a Lush boutique to fulfill all your personal cleaning needs! Need flowers? Bling? Electronics repaired? A panama hat? Yup, they’ve got that. 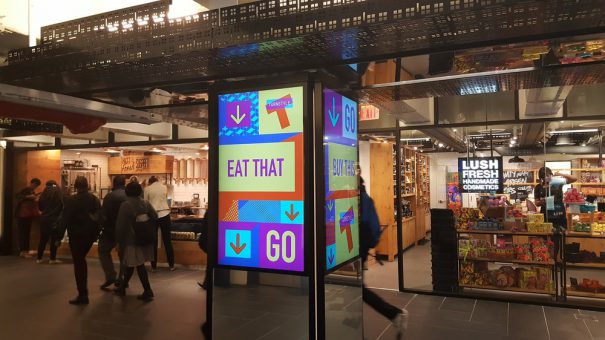 Chow Down
While not as extensive as some of the other upscale food halls popping up all over the city, Turnstyle still offers plenty to satisfy hunger pangs, from the substantial to the sugary.  Shoppers can choose from sushi, Mediterranean groceries, greens, juice, baked goods, coffee from Starbucks and 2Beans, and even a Bolivian Llama Party (no llamas are hurt in the preparation).

Kids will probably be most interested in the new outpost of Dylan’s Candy Bar, as well as Doughnuttery, the latter of which is even equipped with a mini-doughnut machine, and customers can pick out their own sugar topping. It’s important to note that Turnstyle was primarily designed with the needs of grab-and-run weekday commuters in mind, so seating space is available, but limited.

In addition to lots of ways to part you and your money, Turnstyle will also feature weekly live music and other family-friendly entertainments. 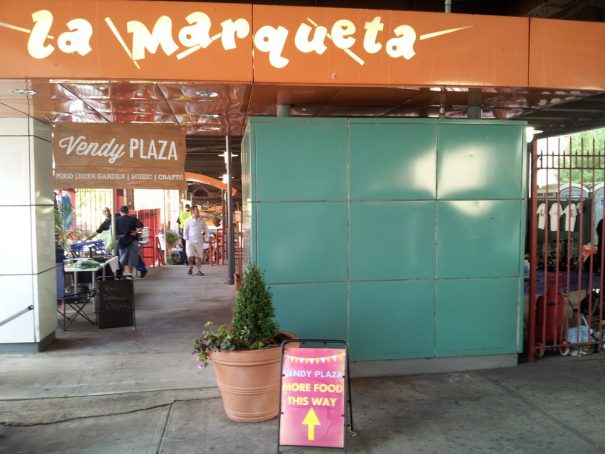 Vendy Plaza
While Turnstyle is in it for the long haul (many of the vendors signed long-term leases), Vendy Plaza in East Harlem is a pop-up answer to Brooklyn’s Smorgasburg, Queens’ LIC Flea & Food (plus their own Smorgasburg), and South Street Seaport’s SmorgasBar. Part of the La Marqueta Retona initiative to revive and celebrate the neighborhood’s unique culture and history, Vendy Plaza is open every Sunday (except July 3), noon through 6 p.m., through September 2016.

In addition to savory it also does sweet. Visitors will find cupcakes, brownies, biscotti and candy apples bigger than an actual child’s mouth dipped in an assortment of even more sugar, from M&M’s to white chocolate bites. 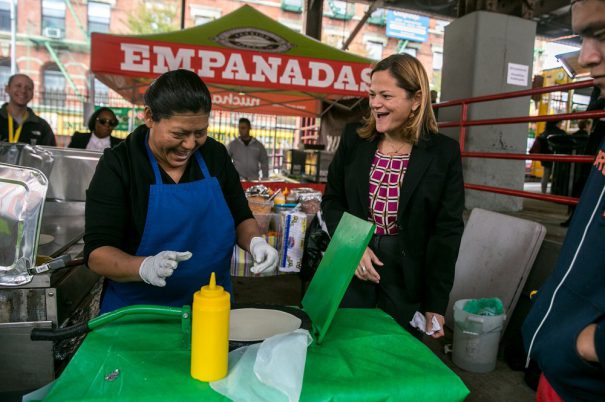 Plus: A Beer Garden and Family-friendly Happenings
For grown-up fun, there is also a beer garden in partnership with Brooklyn Brewery, though all alcohol must stay on the premises. Seating is available for both food and drink merriment.

Because of its under the tracks location, Vendy Plaza is open rain or shine, and makes a great spot to duck into in case of inclement weather. However, also because of its location, it can get rather loud, especially when the Metro North trains zooming overhead are competing with the live band playing every week from 3 pm to 6 pm.

Multiple family-friendly events are planned, including arts & crafts for kids, and giveaways. Watch the market’s website and social media for upcoming activities.

Have you visited either of these fresh NYC food and merch spots? Tell us what you think of them in the comments!