In winter 2020, the place for family fun is outside. Be prepared to hit the slopes with the kids and check out our list of the best sledding hills in New York City. We found slopes in Manhattan, Brooklyn, Queens, the Bronx and Staten Island, and hills for little kids and bigger daredevils. (P.S. you might as well read up on where to grab one of NYC’s top hot chocolates  for an apres-sledding treat!) 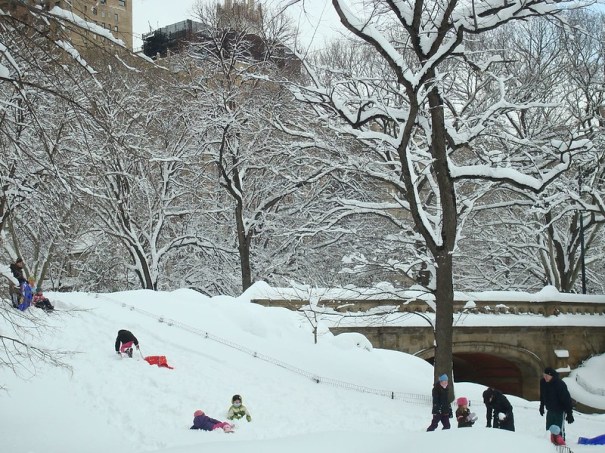 Pilgrim Hill
The unanimous city favorite seems to be Pilgrim Hill at 72nd Street and Fifth on the East Side in Central Park. It offers a perfect incline, very few rocks or sudden drops and a smooth, level glide that evens out at the bottom. Unfortunately, being deemed the best sledding spot in the city also means it gets very, very crowded.

Cedar Hill
For a more mellow round of sledding with smaller kids, head to Cedar Hill on the East Side, between 76th and 79th Streets.

Carl Schurz Park
Don't want to wait your turn? Head a few blocks north and east to Carl Schurz Park on 89th Street and East End, on the lawn north of Gracie Mansion. Bonus: there are two separate dog runs here as well.

Riverside Park
Over on the Upper West Side, some swear by Riverside Drive from roughly 90th Street to 103rd, with a particularly good hill near Hippo Playground on 91st Street. But, the Urban Rangers have been known to host snowball fights, snowman-building contests and pass out hot chocolate at the hill on 103rd Street, so take your pick. The area’s biggest drawback is that being practically atop the Hudson River leads to some frigid winds sweeping in across the water. Bundle up! 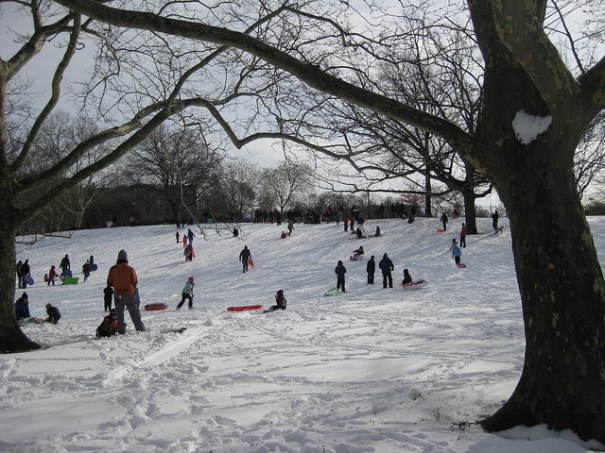 96th Street/The Children’s Gate
Enter Central Park at 96th Street for another great Upper West Side spot that offers hills of various inclines, plus benches where you catch your breath. The biggest challenge here is to avoid those benches mid-flight — the ability to bail at the last possible moment is imperative.

Inwood Hill Park
Inwood Hill Park is a choice spot for sledding in NYC, especially kids with a need for speed. It's also less-crowded than spots in Central Park, and offers a nice view as well. Enter at Dykman Street or Payson Avenue.

More Upper West Side Sledding Options
Two other choices on the UWS are Morningside Park, from 110th to 123rd Street and Morningside Avenue, and St. Nicholas Park on 135th Street, the latter known for its gentle hills and being ideal for beginners. 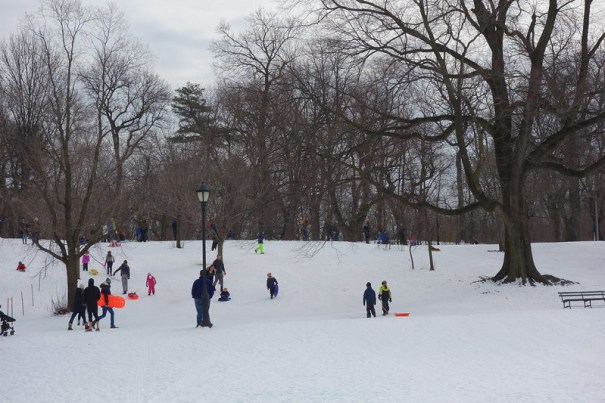 Hillside Park
If you live in DUMBO or Brooklyn Heights, your closest spot is the tiny park that's technically in Columbia Heights. As its name suggests, Hillside Park is home to a respectable slope, and provides ample space to glide to a stop. (You'll likely see dogs romping in the snow as well, as the park is a very popular place to bring four-legged friends year-round.) 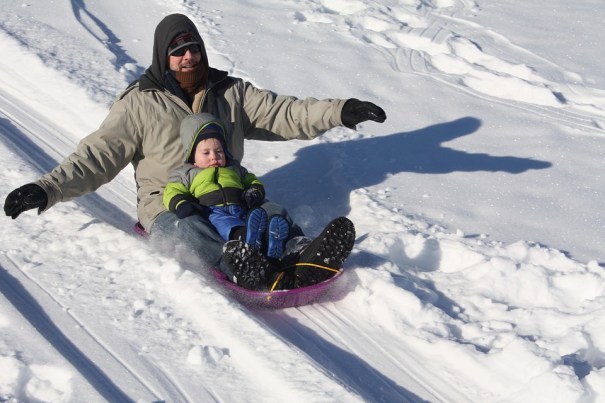 Sunset Park
Home to the highest point in Brooklyn, Sunset Park naturally provides some good sledding. The sweet spot is the interior of the park between 42nd and 43rd Streets.

Owl's Head Park
Further south in Bay Ridge, Owl's Head Park has nice rolling hills, with a good spot at Colonial Road and 68th Street. But dress warmly, as it is right on the water. Another southern Brooklyn sledding option is McKinley Park; head to Fort Hamilton Parkway and 75th Street for a good sledding spot. 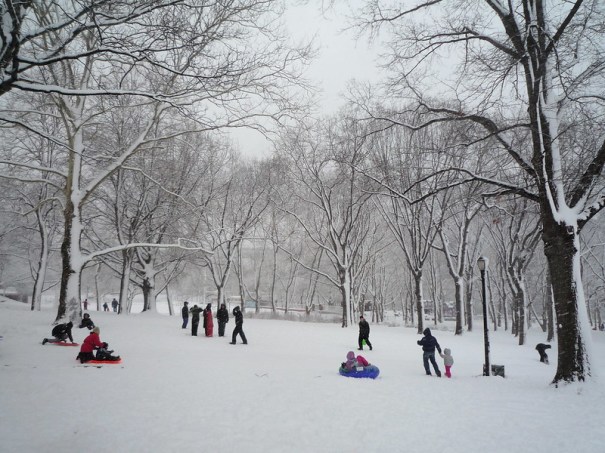 Astoria Park
Take your sleds to Astoria Park at 19th Street between Shore Boulevard off Ditmars Boulevard for a fun sledding spot in Queens.

Mary Whalen Playground
If you're thinking of going to Forest Park Golf Course's Suicide Hill, think again. It's dangerous and sledding there is prohibited by the Parks Department. (But yes, you will see families going there.) Instead, Mary Whalen Playground will offer a less nerve-racking — yet still fun — experience at Park Lane South and 79th Street. 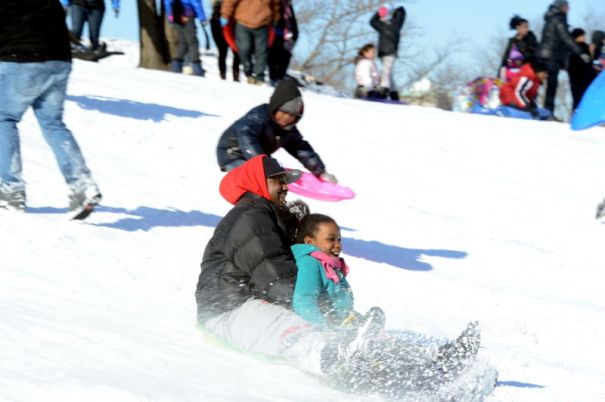 Crotona Park
The slope behind ballfield #3 at Fulton Avenue and the Cross Bronx Expressway in Crotona Park boasts an official, NYC Snow Day designation, which means you'll find organized recreational activities, snowman-building contests, snowball fights, complimentary hot chocolate, and even sleds you can borrow here. Call 311 to find out when the program is in effect.

St. Mary’s Park
The largest park in the South Bronx not only features hills much less crowded than the ones above, but also a recreation center. In non-covid times, this is a good place to warm up before a second run. 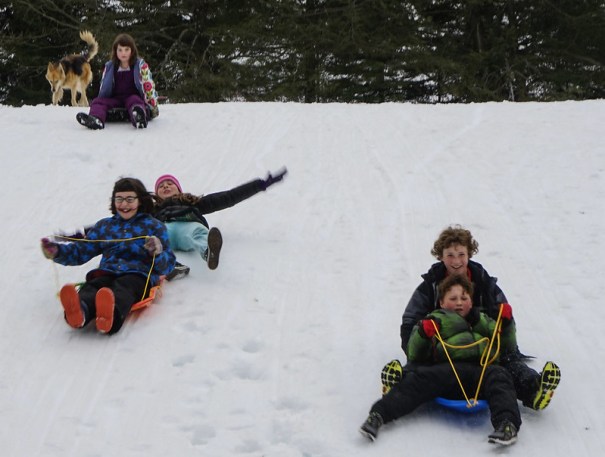 Clove Lakes Park
A local gem, this protected Forever Wild site isn’t exclusively about ecology. It is also a Snow Day site where the park employees put out bales of hay to soften people's landings.

Mission of the Immaculate Virgin at Mount Loretto
This South Shore hotspot for sledding in Pleasant Plains was founded as an orphanage by a priest. The orphanage is long gone, but parents may find comfort in the idea that some angels might still be hanging around looking out for daredevil kids.

For a complete list of city parks that allow sledding, visit: nycgovparks.org.