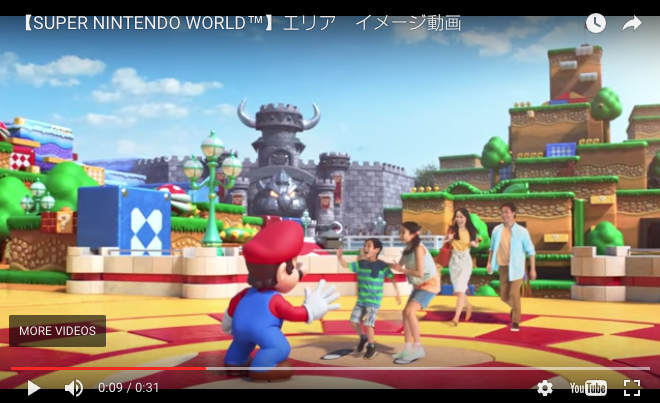 If your kids are into video games, they’re going to be in Super Mario Brothers heaven when Universal Studios opens a Nintendo-themed land at its parks around the globe. Construction for the land began last week at Universal Studios Japan (where Nintendo is based), with Orlando and Hollywood next on the list to get a bevy of rides and attractions based on the gaming system.

Visitors will enter the land through a green tube, after which they’ll be met with a whimsical re-imagining of the pixelated universe, an experience that is likely to include faraway castles, themed restaurants, legions of animatronic potted plants and endless loops of that catchy Mario Brother’s song.

Nintendo World’s biggest attraction will be a Super Mario Kart ride based on the popular racing game. It isn’t clear whether the ride will be an actual fast-moving ride (like Disney’s Radiator Springs Racers), or a simulated experience similar to its Minions and Transformers rides. In any case, executives have said the ride will be “an attraction that is unlike any the world has ever seen” and that it will be “the most immersive and cutting-edge technological attraction we could possibly imagine.”

“We have been collaborating on many ideas for the world. I am very excited to step into Super Nintendo World and experience its immersiveness,” Super Mario creator Shigeru Miyamoto told Variety.

The Tokyo park is set to open the new land in 2020. Dates have not been set for the promised expansions of Universal’s U.S. locations.

Can’t wait until 2020 to see how Nintendo World pans out? Check out the concept video of the land below.

What do you hope to see at Nintendo World? Tell us in the comments below.