It’s time to drop the phone, drag the kids away from the tablets, and send them out the back door to play enough of the old-school yard games listed below to make them break a sweat and earn that popsicle. Since larger groups aren’t really a thing right now, you’ll probably need to join it to make it work. But let’s face it: your routine could probably use a little adrenaline right now too. 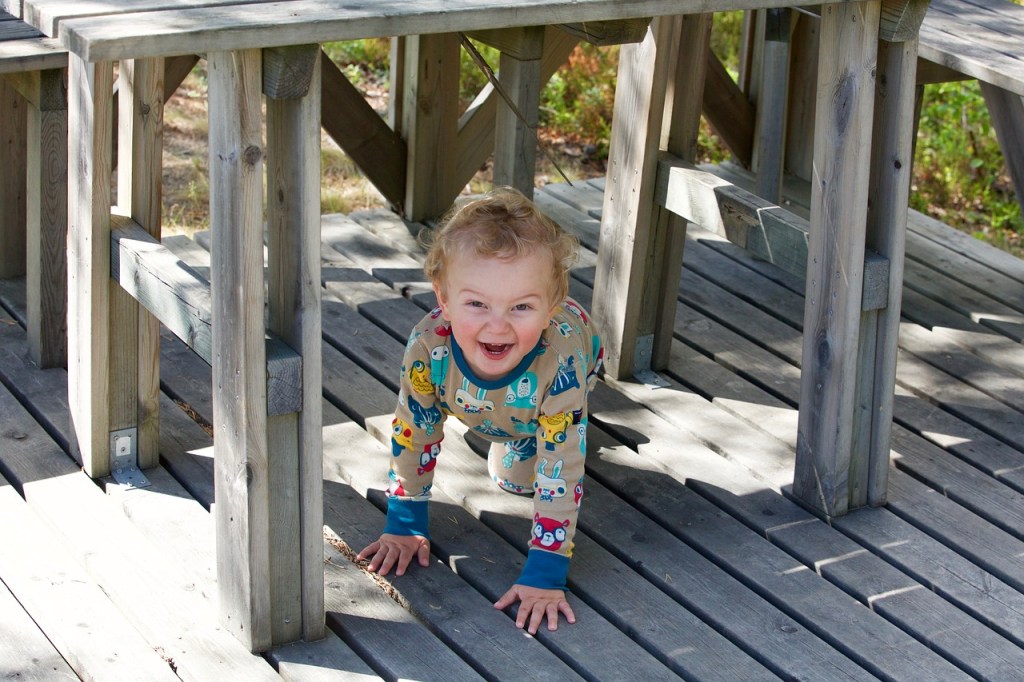 1. Hide and Seek
Let your kids entertain themselves with endless rounds of what might be the most classic game of all time. Even older kids who may have outgrown this game will be up for it, and you can play it inside, too.

2. Blind Man’s Bluff
This classic game is like the thinking man’s tag or a slow-mo version of it anyway. All you need is a blindfold and three players to start. Put the blindfold on the Seeker; then spin him or her around a few times while the other players scatter. Now it’s time to seek. Using her keen other senses, the Seeker tries to tag the scattered players who are rooted in place. Sure, they can duck and dodge her outstretched arms, but they can’t move their feet. It’s a giggle-worthy game everyone can play!

3. Capture the Flag
This game requires a few players, so it’s a great one for larger families. Each team attempts to capture the other team’s flag, which is located at the other end of the playing field, at “home base.” Players can tag members of the other team when on their side, sending them jail. Get your teammates out of jail by crossing into enemy territory and tagging each one. The first team to capture the flag wins!

4. Sly Fox
Fun fact: in France, this game is called, “One, Two, Three, Piano!” To play, one person is chosen to be the “fox” and faces away from the other players, standing by a wall or an imaginary line. The other players must stand in a line at a distance. When the fox isn’t looking, the other children must run or walk to get closer to the fox. If the fox turns around, however, the other children must freeze. If the fox sees someone moving, that child must go back to his/her starting place. The first child who tags the fox without being seen moving wins that round and becomes the fox for the next round! 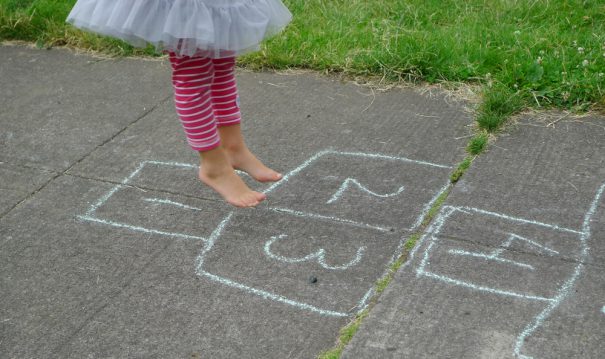 5. Hopscotch
Using chalk (or paint, if you’re at home and want a permanent fixture on your driveway!), draw a hopscotch design on asphalt or concrete (see here for an example). The first child takes a turn throwing a small stone or similar object (i.e. a bean bag, shell, small toy) onto the first square. (The child loses his/her turn if the stone lands on a line or outside the square, and passes the stone to the next child in line.) The child hops on one foot into the first empty square (i.e. skipping square one) and every subsequent square, jumping with both feet at the pairs (4-5 and 7-8). When the child reaches square 10, he/she hops with both feet, turns around, and heads back to the beginning. When he/she reaches the marked square, the child picks up the stone while still standing on one foot and completes the course. If the child completes the whole course without falling or missing a square, he/she throws the stone to the subsequent square (i.e. square two) on his/her next turn. The first child to get all the way to square ten wins!

6. Simon Says
Give your bossiest cherub a permissible outlet! One child is designated “Simon” and stands in front of the rest of the group. Simon then issues commands to the players, i.e. “Simon says pat your belly three times with your left hand.” The children must only follow commands preceded by the phrase, “Simon says.” If Simon simply says, “Touch your nose,” any players who follow the command are out of the game. The objective is to stay in the game as long as possible.

7. Mother May I
One child is chosen to be the “mother” or “father” or “captain.” The other children stand in a line at a distance. Each child takes a turn asking the mother if they may make a certain movement, always preceding their request with, “Mother may I …” (i.e. “Mother may I take five bunny hops?”). If the child forgets to say, “Mother may I …” before the request, he/she must return to the starting line. The mother either says, “Yes, you may,” or “No, you may not, but you may … instead.” The first person to reach the mother wins and becomes the mother in the next round. 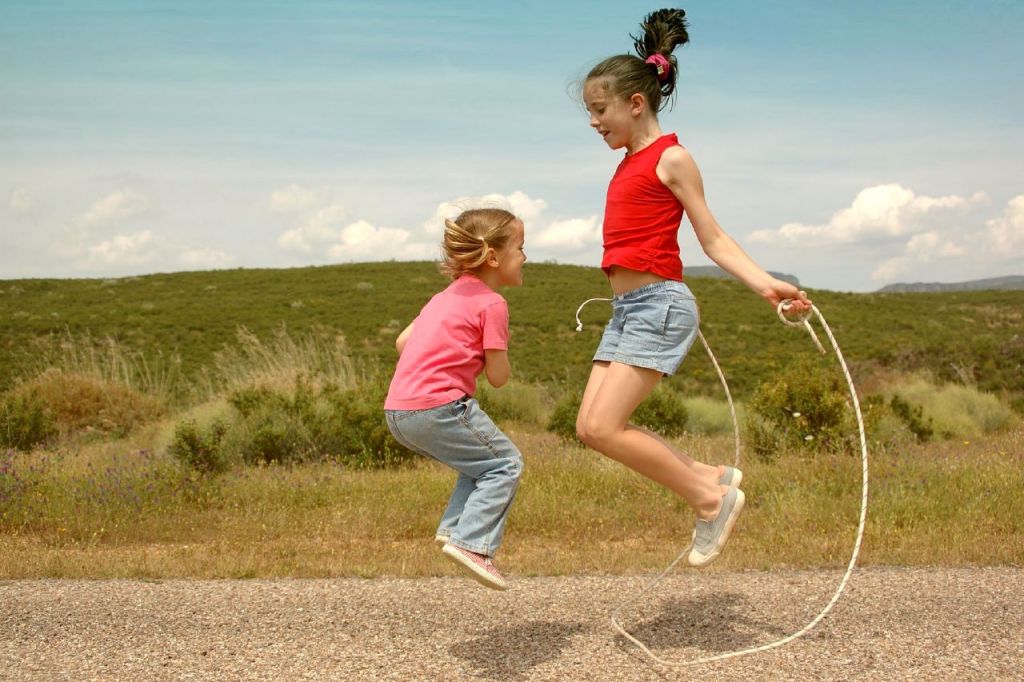 8. Jump Rope Rhymes
There are too many songs to count: Bubble Gum, Cinderella Dressed in Yella, Down in the Valley, Grace Dressed in Lace. And these energy-burners boast an assortment of educational perks: coordination, memory, balance, and teamwork, to name a few!

100 Outdoor Adventures to Do Before Your Kids Turn 10 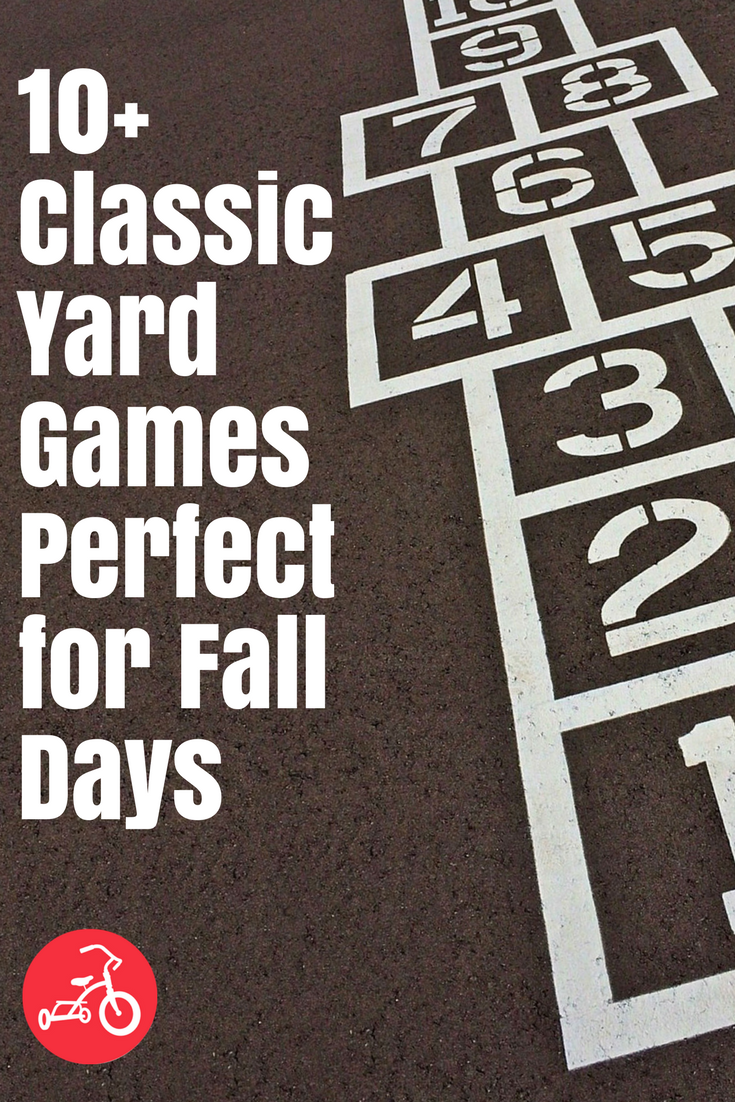