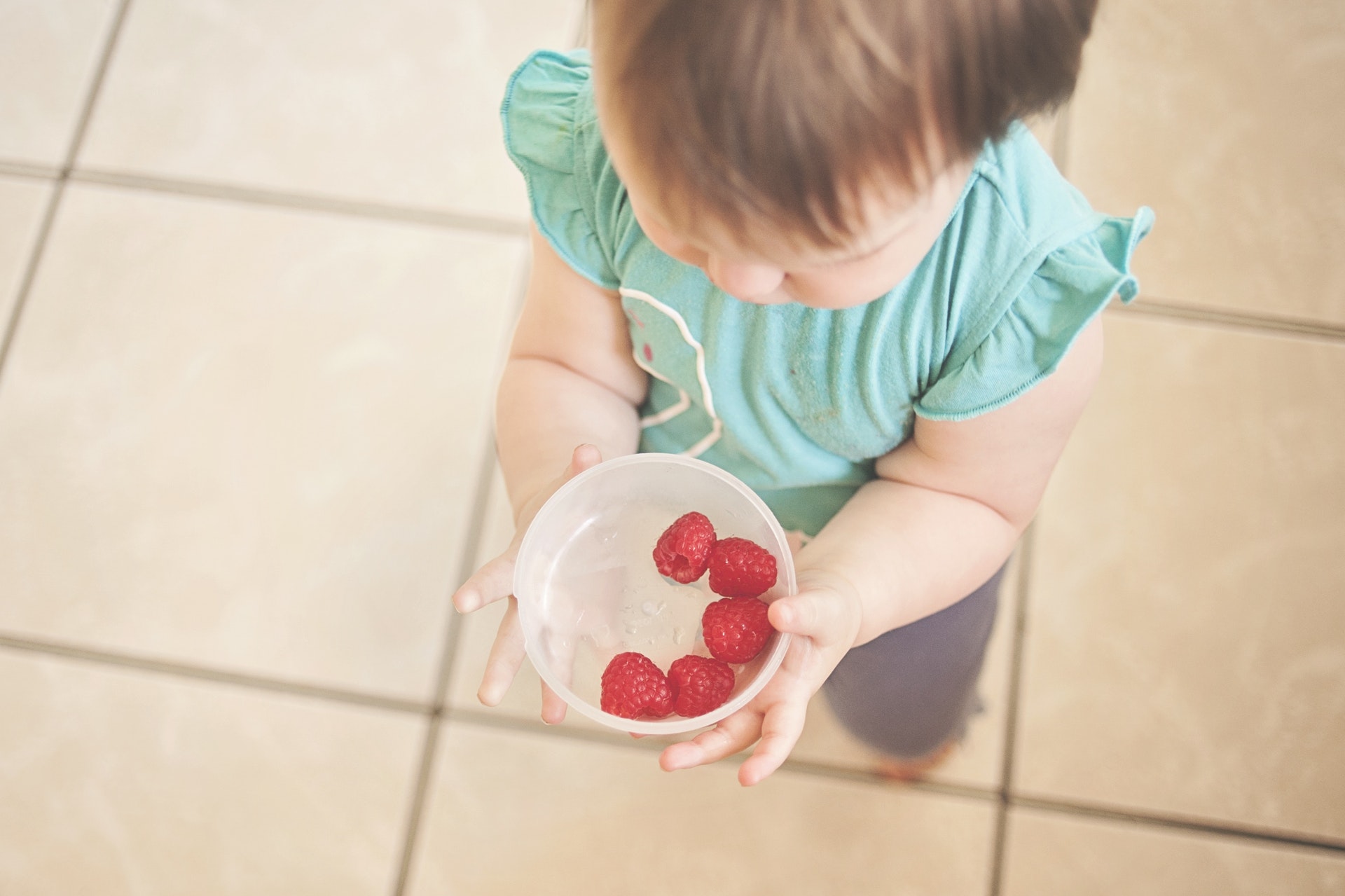 My mother-in-law giggled from across the table, her jaw slack from amazement.  My daughter, with only two teeth in her head, picked up a bell pepper and snapped it off.  Then she started to chew.  She had no molars, but her mandible crushed the sautéed sliver sufficiently to allow her to swallow it in a single, audible, gulp.  Then she reached for a piece of zucchini.

“That’s amazing!” she gasped.  She’d never seen such a thing.  My wife and I exchanged a knowing glance.  This was not the first time we had witnessed this reaction.  It was common in the world of baby led weaning.

From the moment she could sit upright and hold up her head, our daughter was ready to start her lifelong love affair with food.  The new American Academy of Pediatrics guidelines for introducing peanut products early in life had just started making news, so we started there.  Each day, we struggled to insert a spoon of peanut butter into my daughter’s mouth, while she tried to bat it away.  Oatmeal and bland store-bought purees were no different.  At that point, I considered purchasing a fancy baby food maker so that we could try fresher, more flavorful options.  Then my wife heard about this thing called “Baby Led Weaning”.  As luck would have it, there was a class being taught on the subject a short drive from our house that very weekend.  So we attended, and what we learned changed not only how we approached food for our daughter, but for ourselves as well.

The fact that infants should still derive nearly all of their nutrition from breastmilk or formula through their first year meant that we had time to experiment.  Taking to heart the lesson on choking hazards, we prepared fruits and vegetables to be soft and small.  In baby led weaning, the child feeds themselves.  So we set these foods on her tray and prepared for the inevitable mess.  The thing is, it wasn’t nearly the frenzy I had anticipated.  Sure, several bits made it to the floor, where our puppies gladly assisted in clean-up.  However, much of the food made it into her mouth.  At first, however, it did not stay there.  A baby’s gag reflex begins in the front of the mouth, as a protective barrier early in life.  Only over time does the reflex move to the back of the throat.  My daughter spit out a lot of food in those early days, but after about a week, she learned how to overcome her reflex and we were rewarded with gulp after gulp as she experimented with different kinds of food.

Strawberries were her favorite, and the aforementioned bell peppers.  She liked guacamole, and chicken, and fish!  Literally everything we put in front of her, she seemed to enjoy.  Contrast that with toddlers who demand only the blandest of foods (chicken nuggets, pasta, fries, puffs, etc.) and we felt that she might establish healthier tastes before we ever had to deal with that carb-heavy phase.

She’s nearly ten months old now, and her food preferences have started to emerge.  She is not a fan of eggs, opting to toss them away, though we continue to offer them.  She loves fruits and veggies.  But the best moment came this week, when she picked up three shrimp set before her at dinner and devoured every last one.  My wife and I had offered shrimp before.  It was gross.  Previously, our baby sucked on them like popsicles.  But tonight was different.  Tonight, she ate those pieces so quickly that we were sure she had dropped them down into her highchair.  Nope.  During cleanup we confirmed that all three pieces were gone.

It took just over two months of consistent, sometimes messy, experimenting to find our groove with baby led weaning.  I am grateful we took this journey.  Here are some of the benefits derived so far from this wonderful experiment:

Our daughter has been able to practice her fine motor skills in picking up food and bringing it to her mouth. She has been exposed regularly to the most common allergenic foods, hopefully lowering her susceptibility to them in the future. She is developing a palate accustomed to a variety of tastes, rather than becoming attuned to bland purees and cereals. We’ve avoided ongoing expensive purchases of store-bought purees and we also avoided buying an expensive food prep machine.  Our daughter eats what we eat, so there are no extra ingredients to buy and little extra time needed to prep her meals. As a result of feeding our daughter what we eat, my wife and I have reevaluated our own nutritional intake.  We have definitely reaped the benefits of a healthier lifest‌yle. Our dogs are well-fed and happy. Mealtimes are fun!

There is a lot of misinformation out there about baby led weaning.  The most common misperception revolves around “choking”.  Rest assured, if done properly, baby led weaning has been shown to be no more of a choking hazard than jamming a spoon full of puree into a baby’s mouth and past its frontal gag reflex.  If you are interested in learning more, find a website that advocates for baby led weaning or join a Facebook group on the subject.

Going down this past may be the single greatest decision my wife and I have made as new parents.

Chris Hall thought he would be a good father because he was always comfortable with kids.  Then he had one of his own.  Now every day is a new learning experience as he continually tries to keep his tiny human from killing herself.
Red Tricycle > Spoke Contributor Network > Our Baby Led Us on an Awesome Journey of Letting Her Feed Herself