You’ve caught yourself humming the PAW Patrol theme song enough to know it’s one of your kiddo’s favorite shows. Now, for the first time EVER, Ryder and his gang of pups are heading out of Adventure Bay and taking to the big screen! Get your pup packs ready and head to your local theater to catch PAW Patrol: The Movie on August 20! Read on to get the scoop.

Head Beyond the Bay

Follow your favorite furry friends outside of their beloved Adventure Bay into the big, busy Adventure City where their arch-rival, Humdinger, has been elected mayor to disastrous results. But luckily, the PAW Patrol is on a roll, and they work together with a new pal Liberty—the city-savvy dachshund— to put things right.

Chase, Marshall, Rubble, Skye, Rocky and Zuma are joined by their new pal, Liberty, and an outstanding new cast of supporting canine characters. Listen closely and see if you can recognize the celebs behind the voices, including Yara Shahidi, Kim Kardashian, Tyler Perry, Jimmy Kimmel, Randall Park and Dax Shepherd. In addition, you’ll find a star-studded soundtrack by artists including Adam Levine and Alessia Cara. 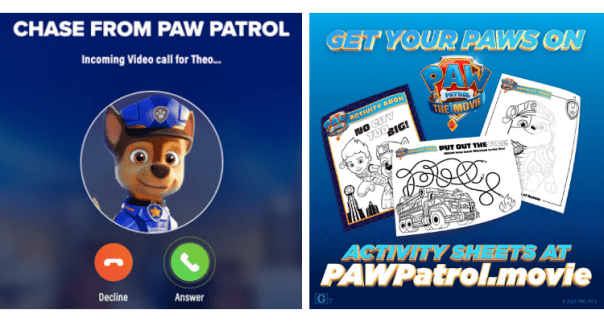 Chase Is on the Case

To coincide with the movie premiere, Paramount is launching some paw-some new features for families! You’ll find coloring and activity sheets and even a way to get a personalized message for your kids from Chase.

On air since 2013, with nearly 200 episodes (most of which we’re betting your kids have seen more than once), PAW Patrol: The Movie will thrill fans of the show in new ways while holding on to that core mission of the pups—do good, and be kind.

Just like the pups do, you can PAW It Forward! Parents, kids, and fans alike are talking about different ways they can pay it forward in their own community, whether at home, in the classroom, or with friends and neighbors.

PAW Patrol: The Movie is premiering on August 20 in theaters and on Paramount+, so book your seats and be there on the double!