If your kids watch YouTube then they probably know the Kids Diana Show. Pocket.watch announced the launch of a new consumer product line for kids based on the popular YouTube channel. “Love, Diana – The Princess of Play,” line will be available Oct. 5, 2020, with Walmart as the exclusive retail partner. 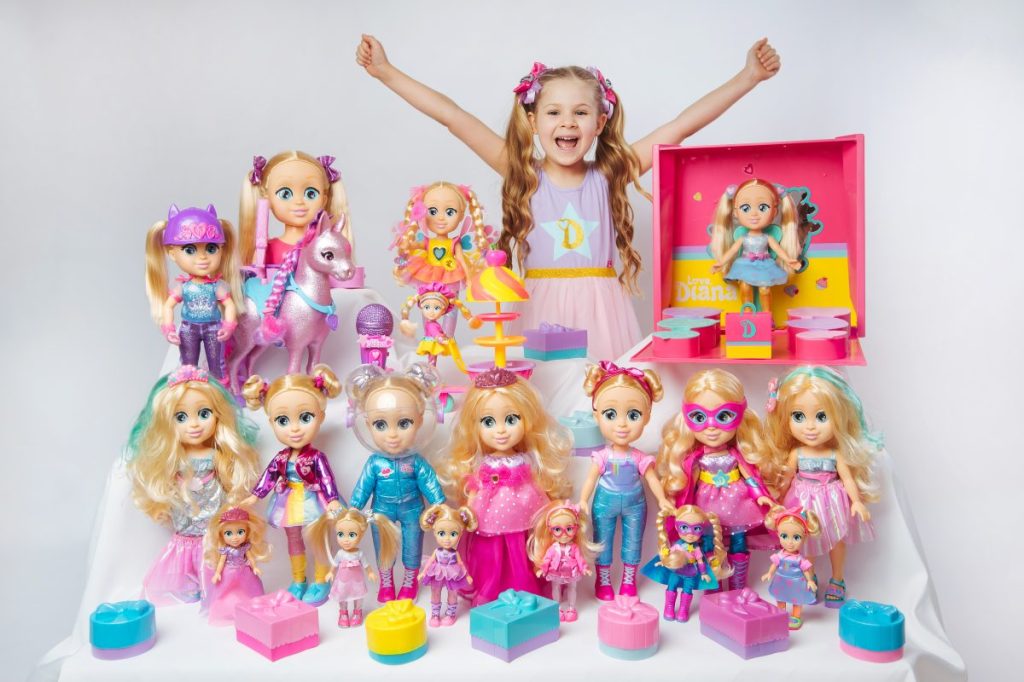 “Amid social distancing, playtime looks different as families navigate a new normal,” said Stone Newman, pocket.watch CRO. “However, pretend play remains an essential part of children’s growth, and it’s inspiring to see millions of kids and families around the world have found a playmate in Diana. We’re proud to introduce consumer products that encourage imagination and capture the inherent creativity in kids. We are thrilled to be partnering again with Walmart and that they are supporting Love, Diana as our exclusive launch partner.”

The Kids Diana Show was last month’s No. 2 most-viewed YouTube channel based in the U.S. with over 3.4 billion monthly views. Boasting 14 channels with family-friendly content translated in nine languages, Diana uses her global influence to embrace the power of play for good, imagining a new world for a new generation of girls. She believes, “If you want to be something, you have to pretend to be her first!” Collectively her 14 channels generated over 5 billion views in August.

Targeted to ages 3+, the Love, Diana lifestyle product line will encompass the core characteristics of playfulness, creativity, empowerment, and friendship that Diana’s audience knows and loves. It will foster imagination and pretend play at a time in the world when kids are challenged to entertain themselves both on- and off-screen:

Love, Diana 13” poseable Mashup Dolls by Headstart – Love, Diana Mashup Dolls encourage kids to embrace all of their colorful aspirations. The Princess of Play’s introductory doll collection inspires girls to be whoever they want to be.  Each doll comes with two themes for unique and distinct looks. Girls can “mashup” outfits across the whole collection for hours of pretend play and fun:

Six-Inch Love, Diana Dolls ($9.99) by Headstart – Diana is the Princess of Play, and she loves to dress up. There are 6 great themes in the introductory collection. Their interchangeable outfits and accessories mean that girls can make their own mash-up fashions, just like Diana! Collect them all – Princess, Ballerina, Superhero, Doctor, Hairdresser, and Birthday Party.

Role-Play Outfits ($24.99) by Jerry Leigh – Inspired by the Princess of Play’s actual wardrobe in her videos, little girls everywhere can have Diana’s “look” in these life-size role-play kits.  Perfect for playtime, partytime and even Halloween, girls can let their imaginations go anywhere. Every set includes a life-size outfit and themed accessories to complete the look.

Mystery Shopper ($39.99) by Headstart – The ultimate surprise toy for every little girl and fan of Diana, this shopper is going to lead to hours of exciting play.  Open up Diana’s life-sized shopping bag to reveal the exclusive 13” Love, Diana Shopper doll. Watch the Mystery Shopper magically transform into a playset that includes a styling chair, salon mirror, and extra outfits – over 15 surprises inside.  Use the Shopper for easy storage after hours of play. As a special gift from Diana for her fans, the handle doubles as a love friendship bracelet for your child to wear.

Style Me Diana Styling Head ($29.99) by Headstart – Now little girls can style Diana’s hair into their favorite look with the life-size Diana styling head. This styling head is full of surprises. Open up the storage compartments to reveal hair accessories for girls as well as the doll head. Accessories include a comb, barrettes, scrunchies and much more. Want a different look? The colorful play hair straightener includes hair chalk that can be used for color change on either the styling head or your head, too. The color change rinses out easily with water.

Cupcake Cart with Exclusive 6” Baker Diana doll ($19.99) by Headstart – Put your chef’s hat on with Diana! Push a cupcake cart and display your cupcake creations.  The cart comes with a molding compound so Baker Diana can serve up colorful pretend cupcakes.

13” Popstar Diana Doll with my-size electronic Musical Microphone ($29.99) by Headstart – Diana is all about the glam, fam! The doll comes with an electronic microphone for you, press any of the 3 buttons to hear Diana sing her latest hit and you can sing along too.  Microphone plays the official Love, Diana theme song Play It, Be It.

Light Up Fairy Doll ($34.99) by Headstart – Light Up Fairy Diana is so magical! Her wings really flutter when you press the bow on her back. Her heart icon lights up and her hair magically illuminates.

Love, Diana Princess of Play’s My-Size Real-Life Vanity ($99.99) by KidKraft – Turn your bedroom into Diana’s bedroom with the same vanity that you see in her videos. Utilizing Diana’s iconic heart shape, the adorable heart mirror-vanity includes 24 Love, Diana clings to decorate and customize your space. Cloud shelves store and display your favorite accessories, with a fold-down drawer with “secret message” Love, Diana icon.

“We’re thrilled to partner with pocket.watch to bring the beloved star Diana to homes everywhere through dolls, pretend play dress-up, and more, during a time when play is more important than ever before,”  said Steve Ronchetto, Vice President of Toys at Walmart.

In conjunction with pocket.watch’s online and in-store launch of Love, Diana at Walmart, the company kicked off Love, Diana Adventures, a live-action and animated hybrid series that debuted Sept. 5 on YouTube with over 10 million views in just four days on the first episode. The eight prequel episodes, first six episodes, and accompanying theme-song music video have generated an astounding 200 million views to date. The series will also be debuting across pocket.watch’s OTT Network which includes Amazon Prime Video, The Roku Channel, PlutoTV, Samsung TV Plus, Sling and direct-to-consumer apps on iOS, Android, Fire TV and Apple TV in October.

Pocket.watch is also extending the Love, Diana brand into mobile gaming. The Love, Diana mobile game will feature a collection of fun minigames bursting with personality, vibrant colors, and imagination that will allow kids to design their very own “Princess of Play” experience. It will be available on iOS and Android devices later in 2020.

Wash Your Hands with Baby Shark