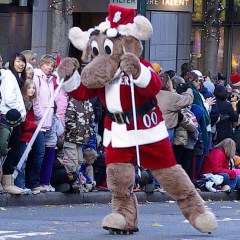 where: Downtown, Portland, Or

Take a break from the biggest shopping day of the year and treat yourself to the 2013 Portland My Macy’s Holiday Parade. This year, the sparkling parade will feature 25 inflatable floats, marching bands, 650 costumed characters and, of course, Santa.  New this year, is the debut of the Santa’s Mailbox float and the “Yes, Virginia” characters.  After the parade, Santa will set up shop in his usual spot in Macy’s at Santaland.