You’ve seen signs along the highway for “El Camino Real” but you’re not quite sure what it refers to (or maybe you missed that Huell Howser episode).  Fear not!  It’s Spanish for “The Royal Road,” or the historic 600-mile trail connecting California’s 21 missions.  With a handful of these landmarks right at our Bay Area footsteps, they make for the perfect edutainment: inspiring architecture, cool artifacts, picturesque landscapes, and historical settings.  Throw in some family-friendly cafes and parks for after your tours and you can make a whole day out of it. Mission San Francisco Solano
Set in bucolic wine country, Mission Sonoma (as it’s also known) is sure to get their imaginations turning with a look into early California life through restored soldiers’ barracks.  Where to go after your tour: directly across the street to Sonoma Plaza.  This main square has two playgrounds, lots of shade and benches, and places for noshing all around the perimeter.  Try Basque Bolangerie Café for pastries and a caffeine fix, or afternoon treats at The Chocolate Cow.  Sonoma Cheese Factory has something for everyone with an array of goodies, sandwiches, and items from their grill. Mission San Rafael Arcangel
Surrounded by the beautiful hills of Marin, Mission San Rafael is a smaller mission but with an active school and community; on Sunday afternoons, a docent will happily share interesting stories and facts about the area.  After a look around, a few photos under the historic bell, and a stop at the gift shop, explore walkable downtown just paces away on Fourth and Fifth streets.

Bonus: on Thursday nights from April through September you’ll find a vibrant Farmers Market along Fourth Street with local vendors to please all foodies (plus the pickiest of kids), bouncy houses and petting zoos, and live music as your soundtrack. Mission San Francisco de Asis
Also called Mission Dolores, this one’s a must-see with it’s beautiful interior.  Once your family has relished in its history as the oldest surviving structure in San Francisco (this mission has seen everything from the Gold Rush to the 1906 Earthquake), head a mere 2 blocks south to hit Dolores Park.  With its colorful new playground and a variety of fun of cultural events throughout the year, this add-on to your mission trek is a no-brainer!

Mission San Jose
Right in the heart of Fremont, Mission San Jose is full of interesting exhibits with cool artifacts like real arrowheads and old church paintings.  When it’s time for lunch head across the street to The Cheese Taster Delicatessen, a quaint place where locals have been lunching (on giant delicious sandwiches!) for more than three decades.  For an even further adventure—and history of a different kind—grab a bite and go window shopping in the Niles Main Street area, a historic shopping district explored for its many antique stores. Mission Santa Clara de Asis
Housing the oldest university in California, Mission Santa Clara’s manicured gardens, which include late period olive trees and (a mere) 400 rose bushes, are a magical place for strolling.  Luckily, the term “keep off the grass” does not apply.  Bring a picnic basket and a few balls to throw around since you’ll find others doing the same—along with students reading and tanning and people enjoying the sunshine (the city gets more than 300 days of it).

Insider tip: in spring there’s an incredibly old, giant, lavender-colored wisteria arbor in bloom, so don’t forget your camera for a sweet little photo shoot with the kiddos. Mission Santa Cruz
At this state historic park you’ll find yourself sitting atop a bluff overlooking the city.  Read: amazing views.  The museum tells the story of the Ohlone and Yokuts Indians through guided and self-guided tours.  Since it’s one of the smaller missions to explore, you’ll have plenty of time to discover Santa Cruz, where you’re just minutes away from the beach as well as walkable downtown, with delectable places like The Penny Ice Creamery (in-house, homemade, organic) and Buttercup Cakes to satisfy your family’s sweet tooth.

Ever hit the Mission Trail?  Tell us what you liked! 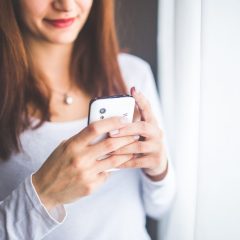 10 Things to Consider Before Sharing Kid Pics on Social Media