The New Whimsical World at Fairyland

An Oakland theme park since the 1950s, Fairyland is an older attraction, but that doesn’t mean it’s outdated. Some things haven’t changed, like the low admission price and the magic key you’ve saved since you were 6 (yes, it still works!), but new things have also sprouted, like Jack and Jill Hill, a magnet for the kids, and a pumpkin-shaped espresso stand for that much-needed caffeine boost. Here’s more of the latest on this happy Oakland spot. Go: Year-round. It’s worth braving slightly thicker weekend crowds to catch Saturday and Sunday puppet shows and theater performances. A big supporter of the performing arts, Fairyland works with East Bay schools and partners with local theater groups, like the Bay Area Childen’s Theatre, to give young thespians experience in the limelight. The puppet theater was recently expanded so hand-made puppets may soar in painted exterior stages, and the fab new amphitheater, Aesop’s Playhouse, faces the meadow.

Get there: The miles-long Lake Merritt perimeter can be tricky to newcomers. Enter Fairyland at Bellevue from Grand Lake Ave. There’s $2 to $5 all-day parking on this street, which is adjacent to the park.

What to wear: Dress the little ones in play clothes that can do with paint streaks and glitter from crafting at the O’Hare Center, grass stains from romping on the meadow, or dusty sand from Play Island.

Where to eat: Johnny Appleseed’s Café, on the park premises, carries all the amusement park favorites, like hot dogs, nachos, and chicken nuggets, along with garden salads, pb&j sandwiches, and quesadillas. (In an effort to promote healthy eating, Fairyland has partnered with the likes of Plum Organics.) If you bring your own lunch, Teddy Bear Picnic Area tables are available on a first come, first served basis. Things to do: While rides are sprinkled throughout the park, including a carousel and Ferris wheel, Fairyland is more of an interactive experience for guests. Each area is designed around classic fairytale settings. Take your time bringing the story boxes to life with your magic key (available for $2 at the front window), then walk around the corresponding exhibit, which brings each story to life. For example, next to the Beatrix Potter story boxes, kids can wander through the homes of Peter Rabbit and Mr. Jeremy Fisher and pull the crank on the clothesline in Mr. McGregor’s garden. Favorite park attractions include the recently repainted Alice in Wonderland Tunnel, the impressively long Dragon Slide for ages 4 and up, and the always-popular Jolly Roger Pirate Ship. Also, look out for a “new” tunnel, re-opened and re-designed after 30 years – the 118-foot long Fairy Music Farm Tunnel, an instant hit with its hidden music and murals.

Bonus: Don’t forget about Fairyland’s annual events, like the upcoming Jack O’Lantern Jamboree on October 27 and 28, when costumed kids may mingle among the park’s costumed fairytale characters, fill goodie bags at treat stations, hop on jumpers and catch special performances. No need to save the costumes for Halloween weekend, though – many kids love dressing up for Fairyland on a regular Tuesday.

What fairytales do your kids love reading? Do your kids love Fairyland as much as ours do? Did you grow up frequenting this awesome Oakland destination? Leave us a comment below.

15 Holiday Theater & Musical Performances You Can Enjoy on Your Couch 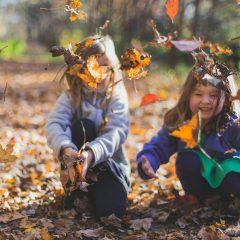 Holiday Shopping Just Got Way Easier, Thanks to Ricky Zoom!