OK Seattle parents, forget dinner and a movie, or that romantic beachside picnic and stroll you had planned. Your coveted night out needs an update. Version 2.0 should add a bit of intrigue, a pinch of drama, loads of teamwork and a dash of panic, as you and your better half try to escape a locked room and save yourselves from certain doom. Sound fun? Read on for the deets on date night’s latest iteration. 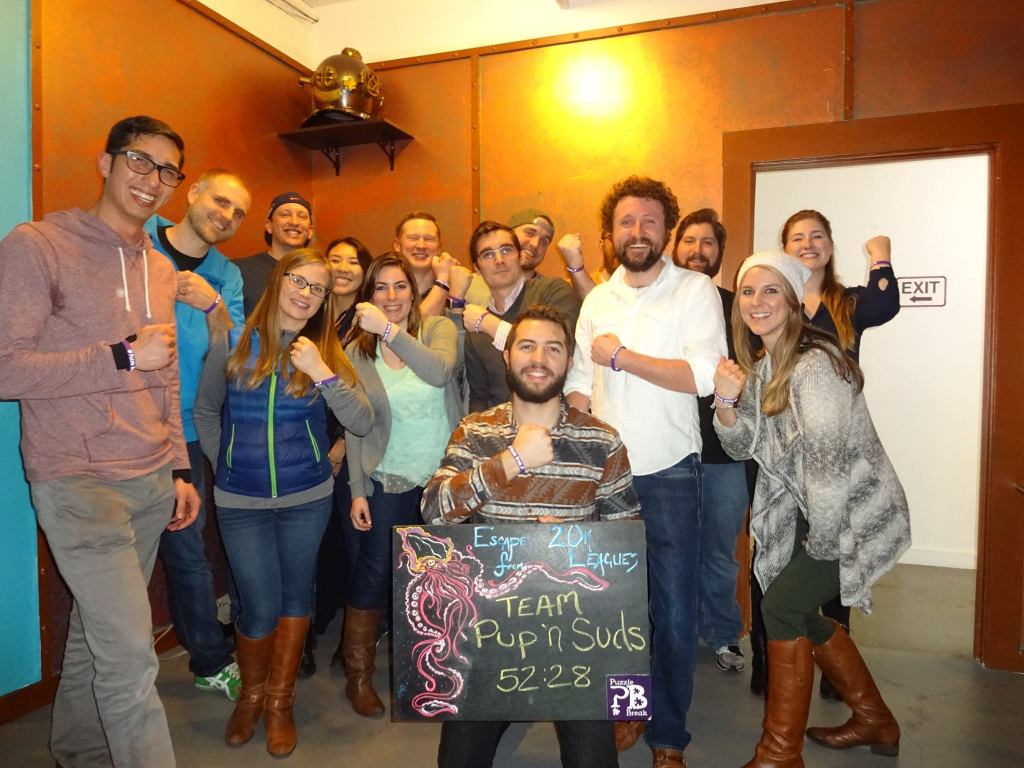 FLEE
Whether you’re on the Eastside or in the city, there’s sure to be a story line in one of FLEE’s seven escape rooms that piques your interest. If playing a CIA agent tasked with infiltrating a secret bunker and retrieving valuable documents, or taking on the role of a researcher who needs to track down a cure for a deadly virus that’s broken out in the city sound good to you, Seattle is the place to play. But if daring museum mysteries, Egyptian archaeology missions or breaking out of prison sound more interesting, Redmond is where you want to be. Whatever side of the bridge you play on, expect movie-quality props and automated, specially crafted puzzles that add realism to the game room experience, and keep people coming back for more. In fact, over 17,000 players are clued in to this popular date-night destination. And the fact that each booking is private means you play with those you know, not those you don’t. Sign us up!

Good to Know: With a flash of your driver’s license, you can play one free game during your birthday week. Now that’s cause for celebration! 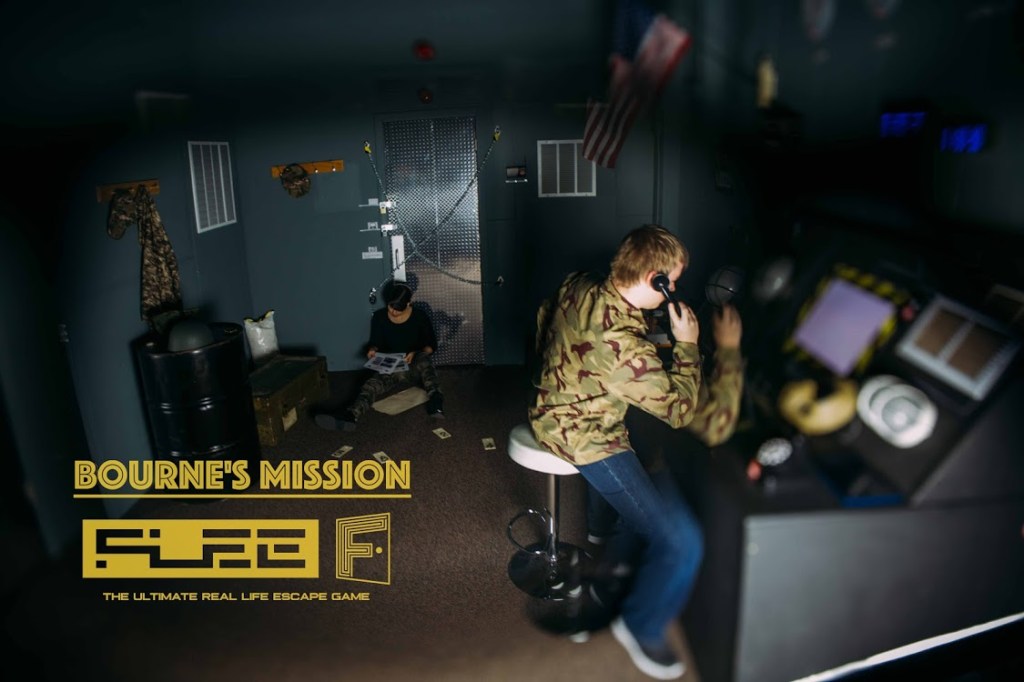 Puzzle Break
Leave it to the company that brought escape rooms to the states (in 2013) to develop complex puzzles that delight players, even when they don’t solve them. They offer up three different games at their two Seattle locations, each with a different focus. Capitol Hill is the place to play with a big group of people you know (think: PEPS night out) or team members you meet that night, as you work to escape from 20,000 Leagues Under the Sea or the Midnight Carnival. But if a more intimate date night is on your menu, the Belltown Eventide Departure game is the way to go. During this hair-raising 60-minute room escape, you and your better half sit down to at a séance to play psychic detectives in search of dearly departed Professor Firestone’s last will and testament. Each of Puzzle Break’s engaging mysteries will give your mind a workout and your toddler a run for his money at being the most challenging thing you encountered that day. And you thought parenting was tough!

Good to Know: Puzzle Break’s Eventide Departure can be played as a duel, against another team of 2-5 players. We’re thinking a group of moms vs. dads, how about you? 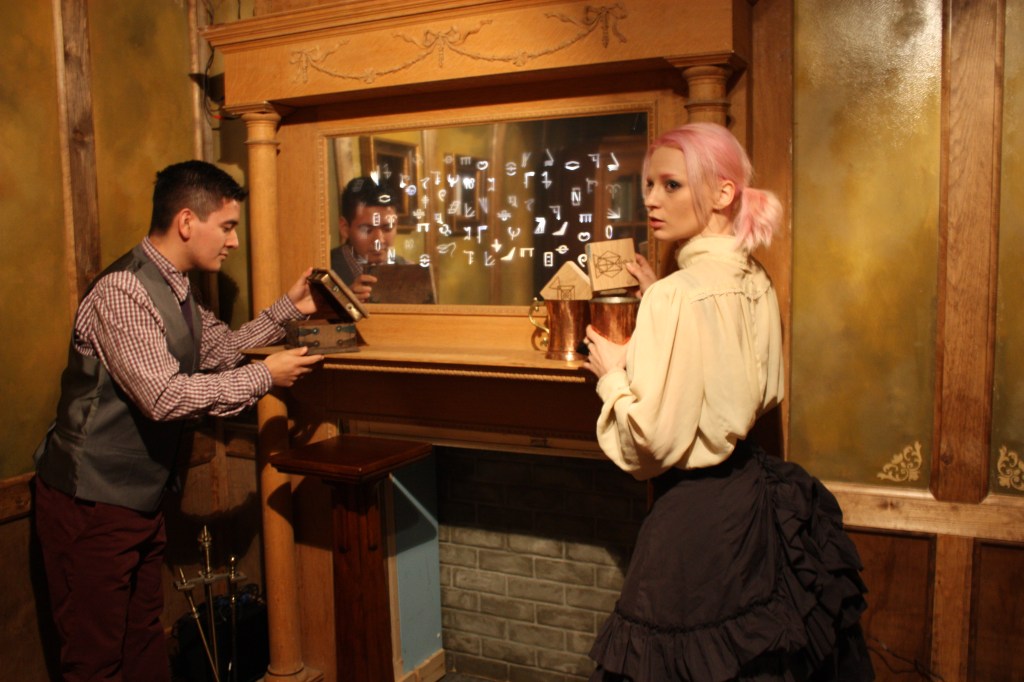 Online: puzzlebreak.us
Cost: $30/person for Escape from 20,000 Leagues or Escape the Midnight Carnival; $150/game for The Eventide Departure

Locurio
For couples and smaller teams of 6-8 people, Locurio offers some interesting twists on an already topsy turvey couple’s night out. Their outdoor scavenger hunt adventure, The Mysteries of Noximillian, has “sunny summer day date” written all over it. Small teams of 3-5 players take to the streets of Fremont, using the (free!) Cluekeeper app, their wits and some initial guidance from the Locurio staff to track down clues and solve mysterious puzzles together. Although it usually takes around two hours to solve this mystery, there’s no time limit, so your group can stop for a bite along the way or snap a pic with the bridge troll without risking it all. But if your truly looking for a night out, consider spending it solving Locurio’s 70-minute Vanishing Act puzzle. You don’t have to be a magician to save the day on this game, but we hear it helps. You and your team will learn all kinds of new tricks as you pick through the clues of world-famous magician Noximillian’s dressing room in the hopes of saving his on-stage assistant, Casey. Tick tock, parents, tick tock!

Good to Know: Locurio’s outdoor game, The Mysteries of Noximillian, is all ages, so while your sidekick probably won’t help you decipher many clues, she sure can join in the adventure! 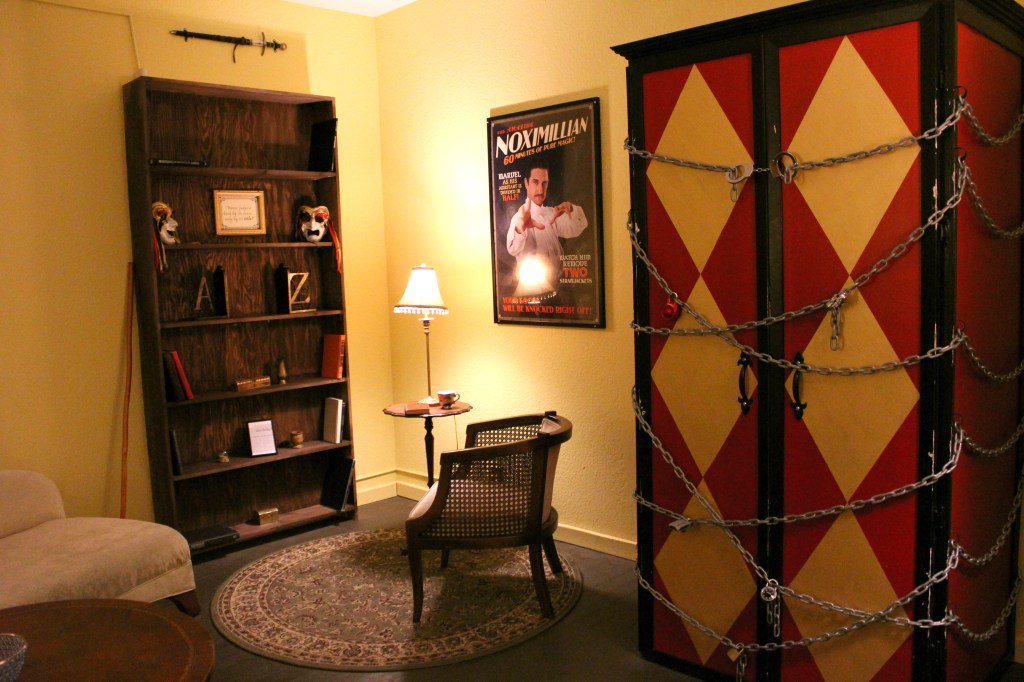 Cost: $35/person for The Vanishing Act; $60/small group for The Mysteries of Noximillian

Ninja Escape
A night at the improv is entertaining. But a night playing one of Ninja Escape’s puzzles puts you in the middle of hilarious action that beats even the best comic. Their campy story lines help players get into character, as ninjas, battling against an ancient and formidable foe, the Kraken. In each of their three ninja puzzle games, the Kraken is up to no good—stealing money from helpless orphans, brewing poisons to kill us all, and ushering aliens to earth—and it’s up to your ninja team to stop the madness, in 60 minutes or less. Their two zombie games follow a similar story line. But here players encounter the reality of the ninja master’s long-ago prophecy—a great war of the undead. While you and your team diligently work to find a key hidden somewhere in the locked room, a zombie, chained to a nearby wall, heckles and jeers at your (hopefully) fruitful efforts. Just think of the post-game debrief you and your mate will have after this adventure!

Good to Know: Their game locations just flipped, so players now fight zombies in Fremont and play out the other three ninja missions in Belltown. 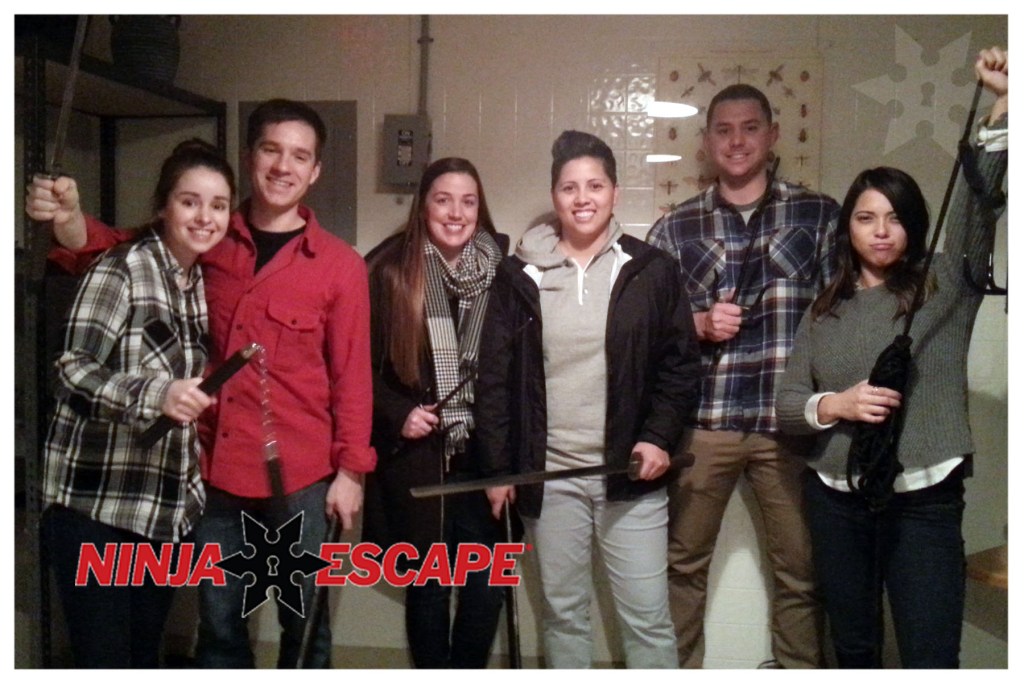 Epic Team Adventures
If being locked inside a room isn’t quite your thing, but the idea of tracking down clues and solving puzzles with your parenting partner is, Epic Team Adventures is so your people. With an emphasis on puzzles that seamlessly blend into intricate storylines, all but one of their seven puzzles’ final objectives is something other than escaping a room. As for date night decisions, The Sparrow Files series and Room 25 Live! work equally well for couples that need a change of pace. Retrace the steps of Carmen Sparrow, P.I. in the intriguing Peking Dragon case that mixes film noir elements into the escape room genre. Or test your wits during a reality TV show audition when you play the Room 25 Live! series. Both can be played with just two people. As for ETA’s popularity, the numbers speak volumes. After playing 25% of people book another game that night, and 33% come back to play again with a week. So be warned, you might need to find another babysitter again, stat! And if you find yourself completely enamored with their escape rooms, check out ETA’s memberships (psst… the Explorer level membership is free!); fun freebies and priority play time are just two of its perks.

Good to Know: Epic Team Adventures has a knack for weaving special events into their escape room puzzles. Hmmm… we wonder what special event (cough–gender reveal–cough) might be fun for parents to try? 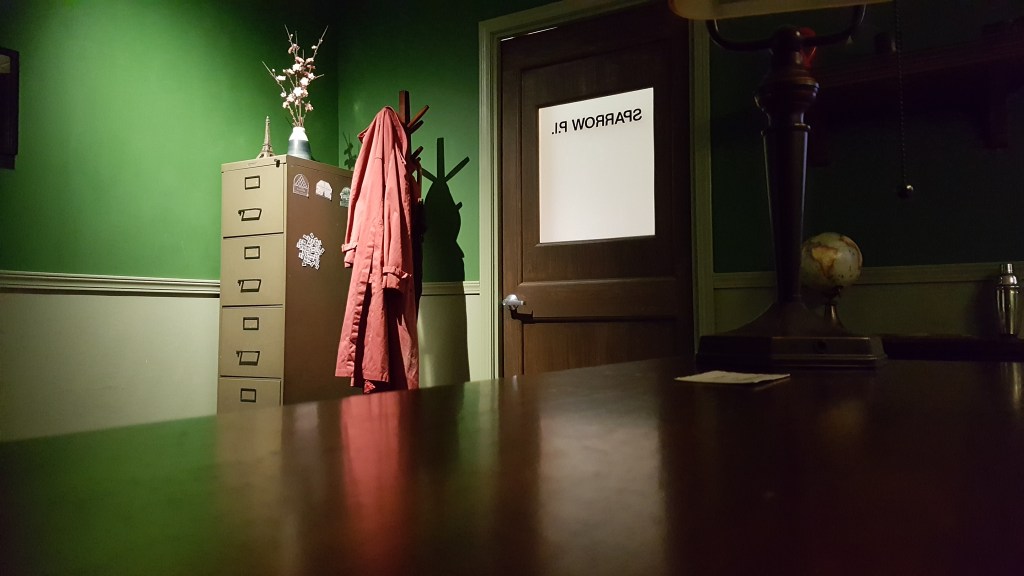 Escape Room Tips for Newbies:
1. Escape rooms make for an awesome group night out. So gather your PEPS cohort, your co-op parent classmates or your besties and book a game together. If you don’t have a large group, no worries. The escape room companies will place you with a group to solve the day’s mystery.

2. Each of these companies offer games for beginners to try. But if you’re not sure where to start, use the difficulty ratings or solve rates (that are usually posted online) to find a game that’s just your speed.

3. All of the game room experts we talked to emphasized how important communication and cooperation are to solving any of these puzzles. Listening, sharing and problem solving together sounds like a great date night for parents!

4. For the most part, once you’ve played a game (win or lose) that’s the end of the road. Replaying games you didn’t solve isn’t a big trend in the escape room world. In fact, many companies debrief teams at the end of the evening so they know what clues they missed and which ones they got right as they worked through the puzzle.

5. Booking in advance is always a good idea, especially on the weekends.

Have you tried an escape room date night? Do you want to? Tell us about your experience in the Comments below. 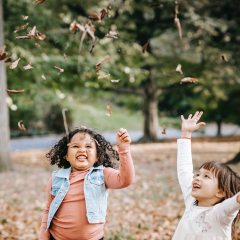 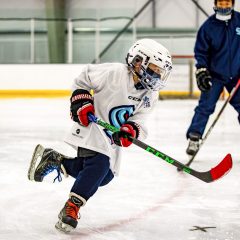 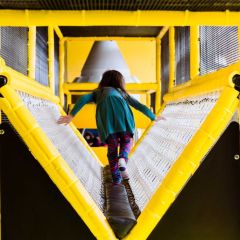 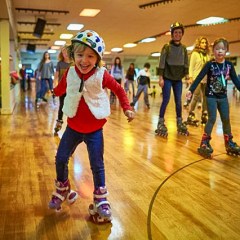