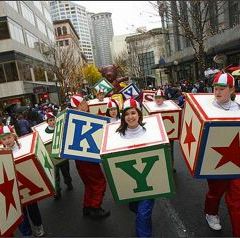 We can’t think of a better way to welcome the holiday season than watching inflatable floats, marching bands, costumed characters, pro sports teams, community drill teams and, of course, Santa Claus travel through the streets of downtown Seattle. On the day after Thanksgiving, bundle up your crew and grab a curbside seat and a cup of hot cocoa for this annual parade. The parade will wind its way through the streets of Seattle to Macy’s doorstep. Psst! Once Santa arrives at Macy’s, he will dash over to his Seattle holiday post in Macy’s Santaland.

Psst…be sure to come back later in the day for the lighting of the Macy’s Holiday Star. The famous 161-foot high, 3,600-bulb Holiday Star has shined brightly throughout Seattle’s downtown for over 60 years. The Macy’s Star lighting happens in conjunction with the  lighting of Westlake Center’s tree and The Downtown Seattle Association’s Carousel at Westlake Park. Lighting begins at 5 p.m. and will include a fireworks display (weather permitting).

Note: Macy’s signature inflatable floats will make their annual appearance in this Seattle tradition along with 25 floats, local middle and high school marching bands, nearly 650 costumed characters, professional sports teams and community drill teams. The Parade steps off at 7th Avenue and Pine Street, then travels west down Pine Street to 5th Avenue, South on 5th Avenue to University Street, West on University to 4th Avenue, north on 4th Avenue and ends at Macy’s when Santa leaves his sleigh and enters the store to open Santaland.