It’s no secret–Seattleites are known for being outdoorsy, athletic and up for playing (or at least trying) any sport, and our kids are no exception. As soon as our kiddo can toddle, we’ve signed them up for soccer. Kindergarten hits, and they’re hitting them out of the park at tee-ball. Elementary school begins, and they’re scoring touchdowns on the pee-wee football team. And let’s not forget ski lessons in winter, camping in summer and bike riding all year round. What’s a frugal father to do? Look no further than West Seattle, you lucky parents, because Second Gear Sports is here! The Play-by-Play
Owners Mark and Ellen Bremen moved to West Seattle 10 years ago, and were no exceptions to the sporty Seattlelite rule—before long, Ellen was running in her first 5k, Mark was an avid bike rider, and their two kids were following in their very active footsteps. One day, a friend was complaining about having to buy spendy cleats for her kid’s ever-growing feet, and the idea struck—used sports gear! Their research turned up many neighborhood consignment shops, but none that were dedicated to used sports gear. This realization, combined with their desire to truly live the term “reduce, reuse, recycle” were the driving forces behind opening Second Gear Sports. Gear Heads
Walk into Second Gear and you’ll quickly see that whatever sport you or the kidlets are into (or are thinking about getting into) is well represented. Bicycles, scooters, helmets, backpacks, sleeping bags, snow pants, cleats, rollerblades, rain and snow boots, skis, jogging strollers, kid carriers, sports shoes of all kinds, and brand names like Bob, Burton, Columbia, Kamik, Kelty Kids, Keen, REI, Rossignol and Schwinn are a fraction of what’s represented at this awesome store! Thinking about taking up running but not quite ready to spend the moolah on new shoes? Check out their selection of (last year’s model) new Asics and Mizuno running shoes at half off the retail price! They are also the only West Seattle retailer with local and fun Revolushon Sportswear socks, as worn by the “Beast” himself, Seahawks running back Marshawn Lynch! Step Up to the Plate
Besides being green, the Bremens main hope is that their gently used sporting gear will allow kids (and adults) the opportunity to play a sports they might not otherwise because of a cost barrier, or simply because—let’s be honest—they don’t know if they will like it. We parents can certainly relate to our kids being thrilled about signing up for a class or sport, only to be absolutely abject about it a month later, only after we’ve purchased the corresponding uniform, shoes, helmet, glove and team photos. Second Gear gives you the chance to buy equipment at 30%-50% below retail prices, so that well-intentioned snowboarding lesson or soccer class doesn’t have to break the bank if it turns out your kiddo is more of a bookworm than a shredder. Drop and Run
Have a basement full of too-small skis, once-worn snowboard pants and barely-broken in baseball gloves? No need to make a consignment appointment at this family-friendly store. Come on in with your new or gently used sports equipment during store hours, and they will be happy to check it out and have you sign up as a new consigner. If they agree to take on your gear, they’ll happily price it based on its age, condition and category. For items priced up to $250, you receive 40% of the sales price, or 50% if the item is priced over $250. If you have a price in mind, they’ll work with you to try to make that happen. When your items sell, you can collect the proceeds anytime, or get store credit and save an additional 10% on your purchases. And best of all, your kids can also start their own consignment account. What better way to teach kids the value of a dollar (and those expensive basketball shoes they insisted on having before they decided they liked baseball)!

Bucket List
If your kiddos are already starting the lists for Santa, look no further than Second Gear. From scooters to balance bikes to 100cm skis, if Second Gear doesn’t have it, they’ll start a wish list for your every last sports need. When that item arrives in their store, you’ll be the first to hear about it! Can you say slam dunk?

Think you’ll be visiting Second Gear Sports soon? Already visited? Let us know about your experience in a comment below.

-Erin Cranston, words (and some photos) 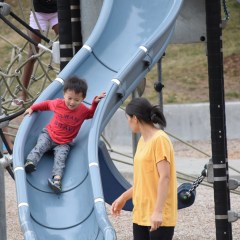