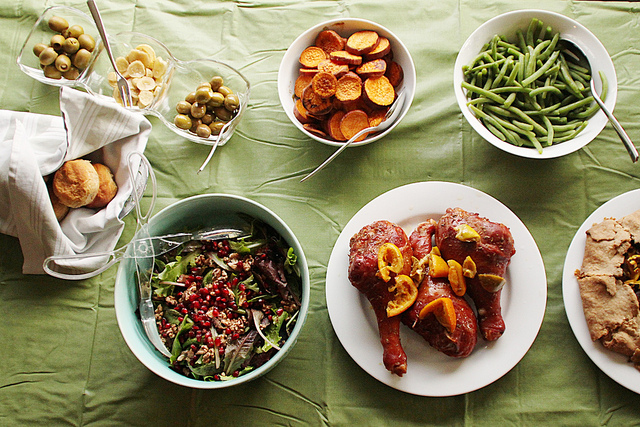 Whether it’s Grandma’s secret apple pie recipe or the cheesy casserole you let yourself indulge in once a year, Thanksgiving is a showcase of family food traditions. Here the Red Tricycle team reveals their own family’s favorite Thanksgiving recipes. Read on to discover dishes and desserts that’ll soon become a part of your Turkey Day dinner tradition.

Jacqui, Founder & CEO
I’m totally addicted to mashed cauliflower, which is essentially just a vessel for transporting gravy to my mouth with fewer carbs/calories than mashed potatoes.

Tuba, Marketing Director
I love making this sausage and kale Thanksgiving dressing. Instead of sausage I substitute spicy turkey.

Erin, Editorial Director
Did somebody say pie? I have a major sweet tooth, but have no patience, especially when it comes to laboring over pie crusts that always seem to break. My remedy? This recipe for skillet apple pie that’ll satisfy any dessert-lover. Plus, it’s very easy to make and basically uses only one big skillet so there’s little clean up. Enjoy!

Tina, Web Producer
I love to eat stuffing! After making the stuffing, I skip putting the stuffing into the turkey and eat it myself! I’ve used this recipe (adding and subtracting some ingredients) and it’s super delicious!

Abby, Marketing Assistant
We do Turkey three ways at Thanksgiving: baked, smoked and deep fried. My favorite of the three is the smoked turkey, that’s cooked by my Uncle all day in the green egg. I don’t have the original recipe, but you can find one similar here.

Brandi, Digital Media & Sales Assistant
Buckeyes! My mom makes these for every holiday for as long as I can remember. Last year, my uncle attempted to throw a buckeye across the room to my dad, but it hit our freshly painted white wall instead, leaving a permanent stain to always be remembered! 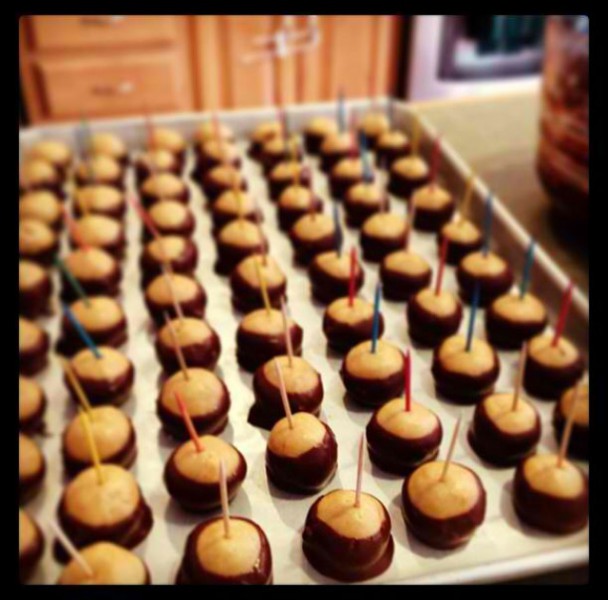 Erin F., Bay Area Editor
Apple pie. I’m a sucker for the classics at holidays, so it’s the one time of year I steer clear of new and inventive dishes in favor of the familiar. My dad baked apple pies with my brother and I for as long as I can remember—he could peel a granny smith in one continuous swipe, and I remember loving to play with the long curly apple skin “ribbons.” Now I make the pies, and while I’ve stuck to the same recipe for years, this year I’m upping the ante just a bit and trying this one from Three Babes Bakeshop. Yep, I’ll even attempt the lattice top.

Meghan, LA Editor
I’m a Boston girl (go Sox!), so Thanksgiving and Christmas aren’t complete without buttery Parker Rolls.  They’re heavenly.  We can eat so many, we always make a double pan – and then extra’s make awesome mini leftover sandwiches. Our family recipe is similar to this one.

Phebe, Atlanta Editor
I am usually in charge of the apple pie. We bake this version in our fam using paper-thin apples sliced on a mandolin layered with butter and cinnamon. It is a labor of love we have made in our family for generations. It is named after Frank, my grandmother’s cook she had back in the 1950’s that was a beloved member of the family. We usually tell stories about him while we eat it.

Julie, New York Editor
My husband always makes Potato Puffs, which I think are amazing since I’ve never been a mashed potato fan. It’s his mom’s recipe below that is sort of similar to this one here.

Kristina, Seattle Editor
Every year, I make cream cheese sugar cookies in the shape of turkeys and let my kiddos do the decorating (the day beforeThanksgiving). I always double the recipe and use 1 (8 oz) package of cream cheese. I also use store-bought vanilla or buttercream frosting. Amber, San Francisco Calendar Editor
I vary this basic stuffing recipe from Martha Stewart by subbing 1 part mushroom and 1 part vegetable broth for the chicken broth and bake it on the side (not in the turkey) to make it vegetarian-friendly. I also add lady apples, whole. The kids love the tiny apples nestled in among the stuffing!

Leah, San Diego Editor
Creamed corn one of my favorite Thanksgiving side dishes and it will knock the socks off of your dinner guests. I always double the recipe because it’s the first dish to run out every year. I like that it’s corn, which is traditional for Thanksgiving, but cooked in a different way. I also love that you can make it in advance. I often make this one as early as Monday and then bake it on Thanksgiving. Recipe here.

Ayren, DC Editor
My Thanksgiving “thing” is this Broccoli Bread. I know, it doesn’t sound too appealing, but—I promise—it just might be the most moist, savory bread you’ll ever have. I make it instead of cornbread or stuffing. To get kids on board, I just tell them it’s “Super Bread,” and they gobble it up.

Suzie, Portland Editor
Before our daughter came along, my husband and I started the tradition of hosting the Stray Dog Thanksgiving every year, inviting all of our friends who lived far away from their families. I cooked the turkey and gravy and friends brought sides and desserts. For 10 years, I have used my mom’s handed-down turkey recipe and it has always received rave reviews because the turkey turns out so moist, with a hint of sweetness. Unfortunately, you cannot make gravy from the drippings, so in addition to my mom’s turkey recipe, I’m also sharing a super easy gravy recipe that you can make while the turkey is roasting. Enjoy!

Francie, Account Manager
At Thanksgiving I always offer to make a green vegetable to balance out all the carbs that everyone else makes. These Barefoot Contessa brussels sprouts are a huge hit. The balsamic and pancetta combo is amazing! We get the big stalk of brussels sprouts (Trader Joe’s sells them) because my kids think it’s fun to snap them off and help me cook them. They are even willing to try them because of the bacon. 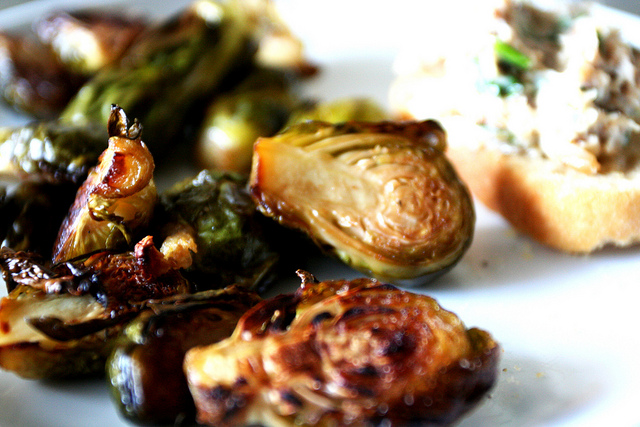 Laura, Account Director
I found this delicious sweet potato recipe a couple years ago just before it was announced that Jose Garces had won the next Iron Chef. The spiced pecans are so good you could serve them as a snack! Also-easy to leave the nuts off for those with allergies or aversion to spice. Sweet Potato Gratin with Chile Spiced Pecans. Loove pouring over new recipes for Thanksgiving.

Julie, Account Director
My husband is the main cook in our family but this is my one contribution to Thanksgiving dinner and it’s a big crowd pleaser! The chestnuts are kind of labor intensive but the reward is worth it. We serve this “fancy stuffing”, as my daughter calls it, in addition to the good old traditional kind.

Jessica, Account Director
I started making dried cranberry, apricot and fig stuffing a few years ago after seeing it in Bon Appétit. I’m a collector of their thanksgiving editions. I had my soon to be mother-in-law coming into town (who is a great cook) for turkey day, and wanted to impress her with a fancy stuffing dish. She was raving about it for days!!