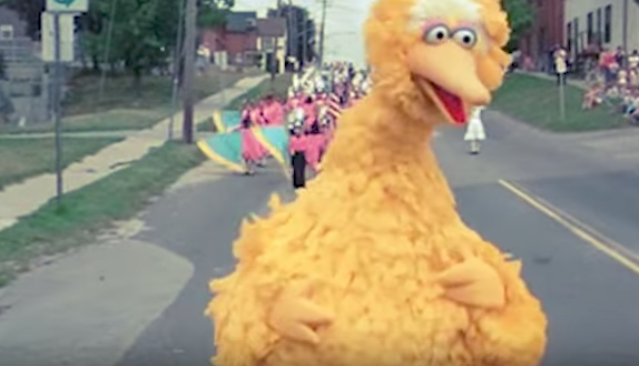 Fans of the Beastie Boys will love this marvelous mashup of the rap punk classic “Sabotoge,” which shows the yellow bird and his brightly-colored friends perfectly mirroring the antics of the 1994 music video.

The “Sesametoge” video, created by mashup master Adam Schleichkorn, who runs the YouTube account isthishowyougoviral, pairs footage from the 1985 Sesame Street film, Follow That Bird, with the classic Beastie Boys track. This time, instead of mustached men running from boxy ’70’s cars (as was the case in the Beastie Boys video), Big Bird spends the three-minute video fleeing from various people and Muppets.

Those familiar with the original video are apparently in awe of the mashup’s frame-by-frame authenticity. The video has already racked up more than 800,000 views, with admirers making themselves known.

“It’s crazy how well edited this is, this is amazing,” says one YouTuber. “You sir, are a national treasure. Thank you,” said another.

Here’s the original video, if you want to do the play-by-play comparison:

And, if you thought sabotaging Sesame Street with ’90’s rap was something new, you’re gloriously mistaken. Turns out, the Bird is no stranger to mouthing hip hop songs. He and his fellow Muppets been mashed up with all sorts of tunes, from DJ Jazzy Jeff’s Summertime to  House of Pain’s Jump Around.

Are you a fan? Tell us what music video you want to see next in the comments below.