Editor’s Note: The San Diego Bay Parade of Lights has been cancelled for 2020. Check back here next holiday season for all the details on this amazing event when it resumes in 2021.

Most kids get to see Christmas lights on land, but in true SoCal style, San Diegans can also spy twinkling lights on 80 lavishly decorated boats as they glide across the water in the 48th Annual San Diego Bay Parade of Lights! This year’s parade theme is ‘Comic-Con on the Bay’ and viewers will be dazzled by the procession, which may be viewed from several spots. Read on for where to enjoy this holiday tradition with your family. 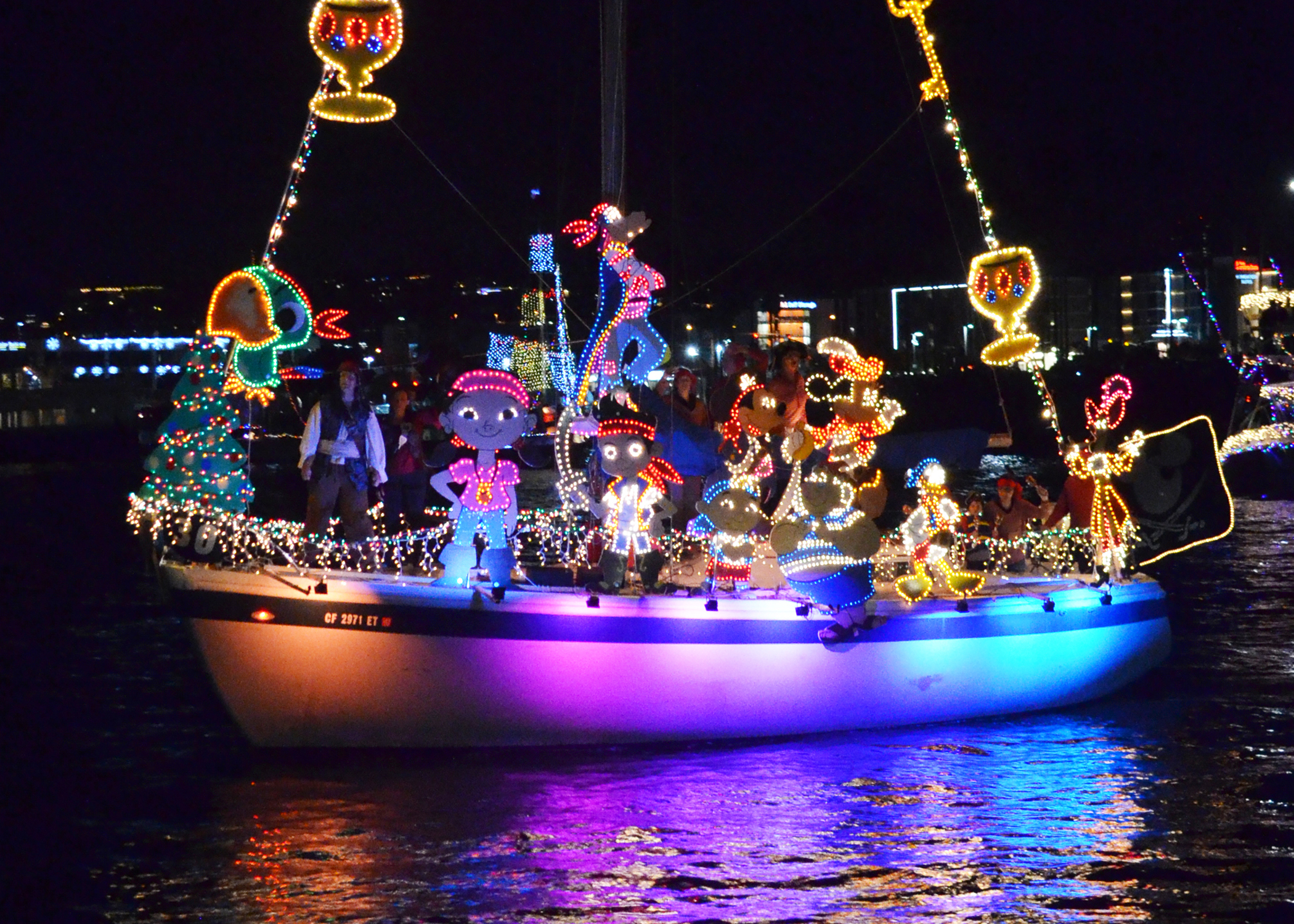 Views of the Parade for Landlubbers

Grab your comfy chairs, bring a warm blanket, fill up that cooler and park it! Here’s where to view the San Diego Bay Parade of Lights from land.

Harbor Island Park
Get a shoreline view at this smaller park with a nice grass field. Parking is free, but there are fewer spaces to score.

Good to know: Would you rather be warm and cozy? Tom Ham’s Lighthouse is a good go-to eatery to dine at while watching the Parade cruise by––but you’ll need a reservation and they book up fast. If you can’t get a table, head to the park for the parade and eat at Tom Ham’s Lighthouse afterwards. 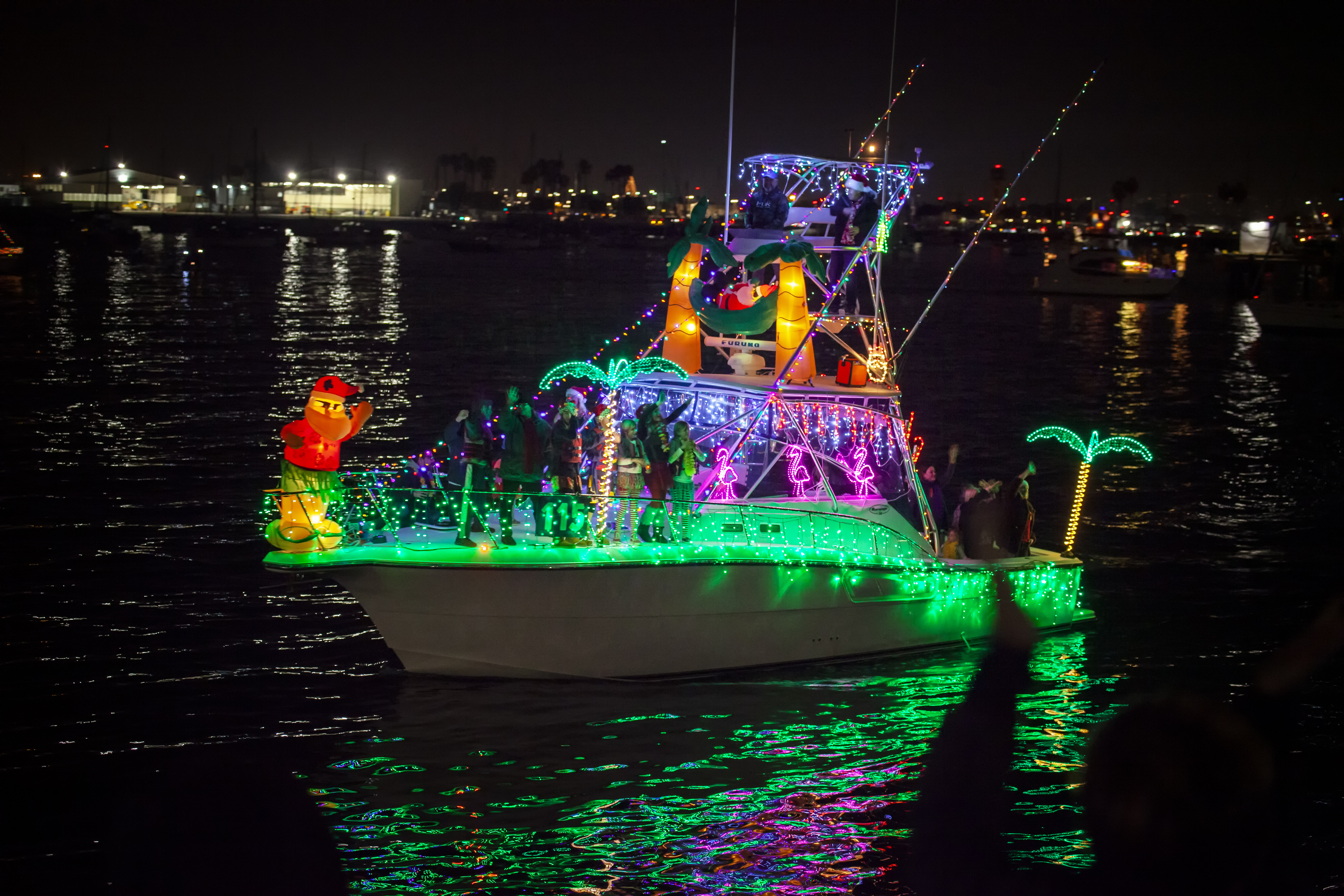 The Embarcadero
Join the merriment at The Embarcadero where the festivities begin at around 6 p.m. If you want to head to a comfortable nearby restaurant, try the Fish Market. They accept reservations.

If you’re viewing the Parade of Lights from this locale, don’t miss ‘A Very Carnitas’ Christmas‘ which takes place on Sun., Dec. 8 & 15 from 4-7 p.m. The Embarcadero Shack is pulling out all the stops for the San Diego Bay Parade of Lights. Ideally situated along the parade route, Carnitas Snack Shack will have entertainment for the whole family. Little ones can enjoy hot chocolate and peppermint soft serve, while adults can imbibe festive cocktails. Additional fun features include cornhole and live music by Mike White.

Time: Boats will go by at approximately 6 p.m.

Seaport Village
If your little energy bundles need a place to run, then North Embarcadero Park offers a fun and festive view. You can park (fees apply) and eat at Seaport Village.

If you want to find a restaurant view, the Harbor House in Seaport Village is a good bet. But be aware, it gets crowded. 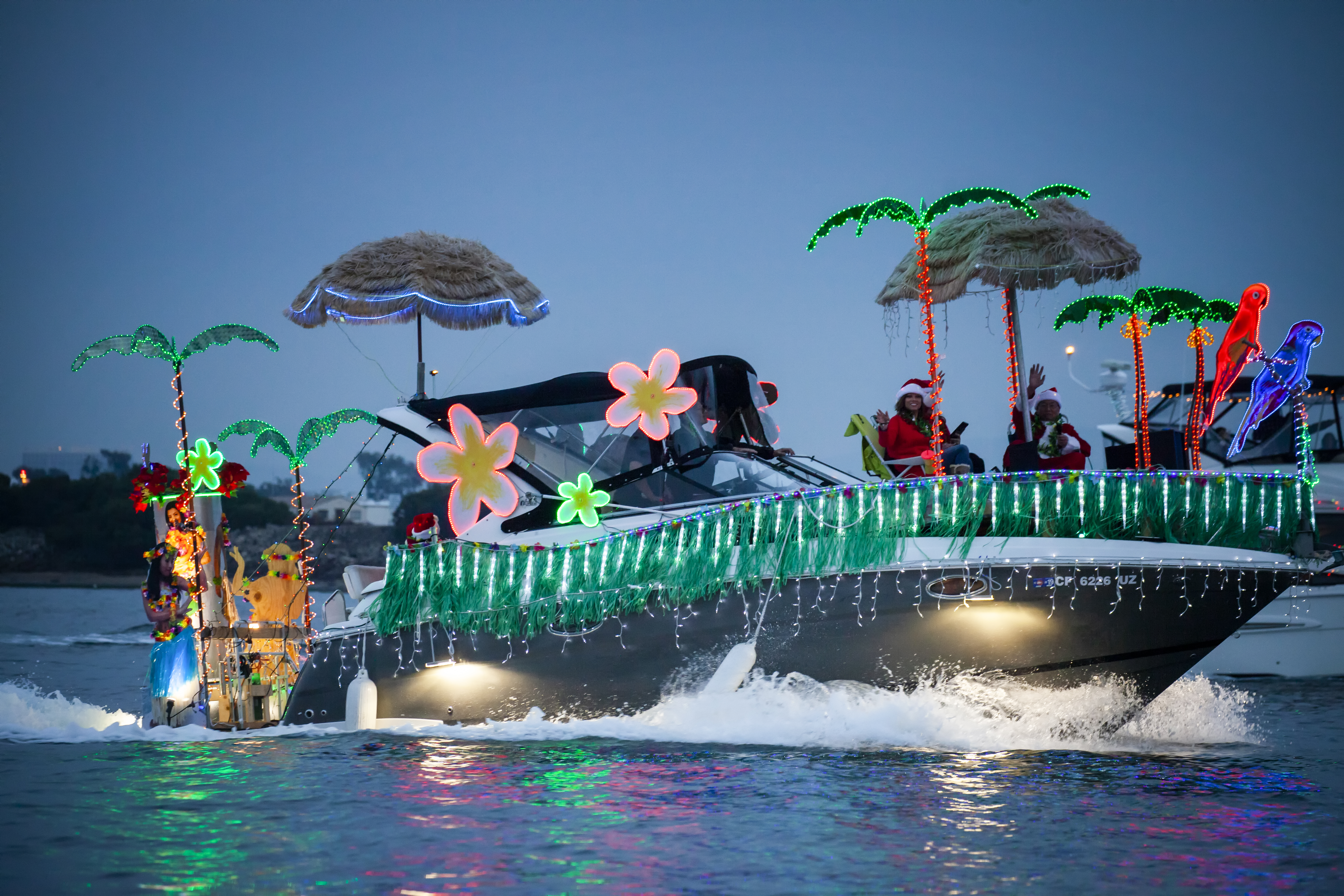 The Pier at Cesar Chavez Park
You’ll love the fact that this waterfront park offers a perfect viewing spot from the Pier. There are also picnic tables and a playground area if the kids need to burn off some energy and have a snack.

Ferry Landing on Coronado
The pathway along Coronado offers a great view of the Parade. You can park in the nearby neighborhoods, then walk to the waterfront viewing areas. This location is the last sail-by of this sparkling Parade.

Time: Boats will go by at approximately 7 p.m. 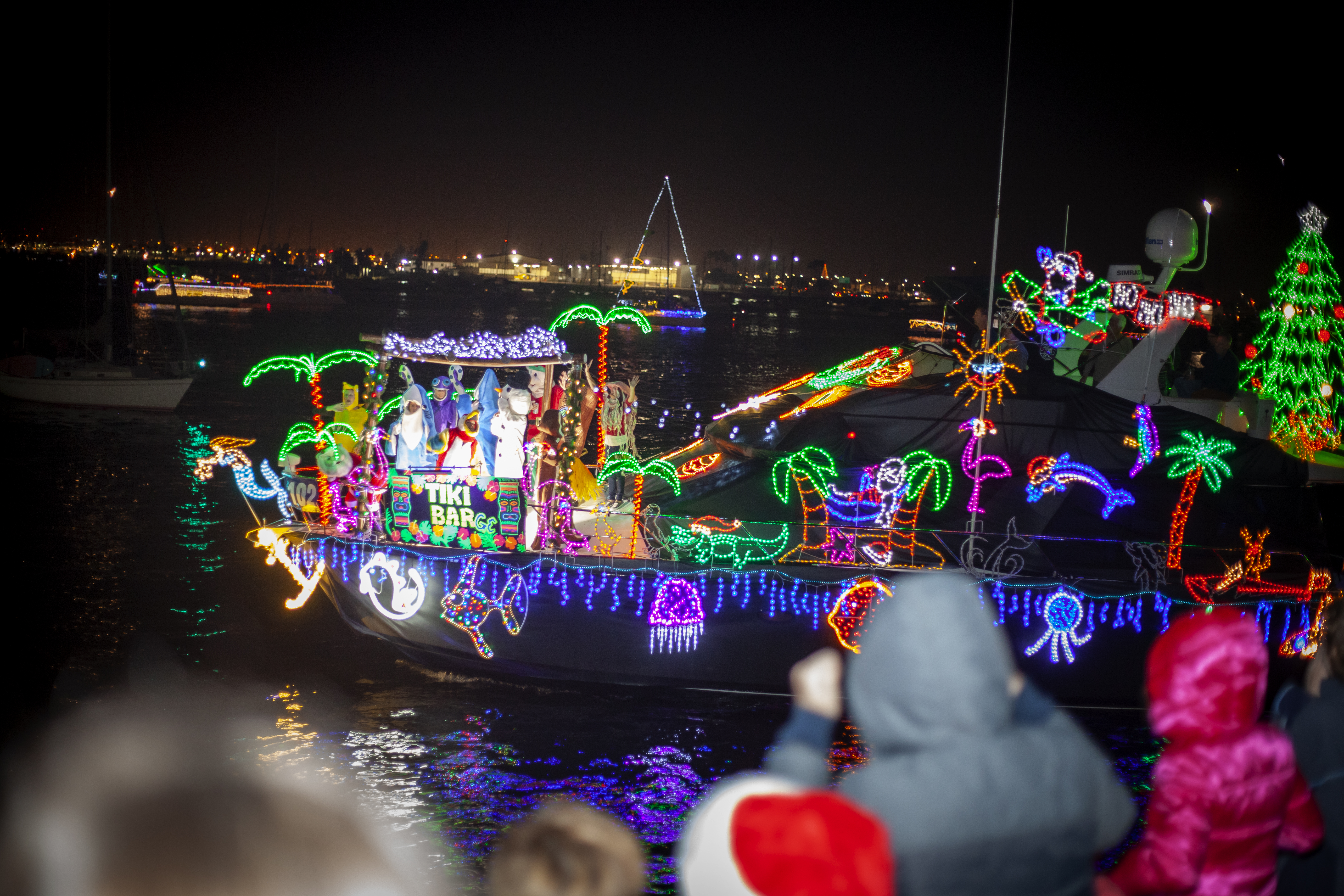 View the Parade From the Water

Steam Ferry Berkeley, Downtown
Judges always have the “best seats in the house” and the Berkeley is where they’ll be. Not only will you enjoy a meal on a historic steamboat, but also, your crew can get a perfect look at the passing boats. Psst.. buy tickets early! This event sells out!

Flagship Cruises on the Bay
Grab the champagne, sparkling cider and your little sea captains and bundle up aboard a luxury cruise. You’ll have a brilliant view of the boat parade and the lit San Diego landmarks. You may also opt for the dinner cruise which costs $89.50 per adult and $53.70 per child.

Good to know: Wherever you are taking in this brilliant holiday parade, plan on spending about an hour at any given point along the route to see all of the boats cruise by.

Jolly Events Where Kids Can Get a Photo with Santa Claus

Timber! Where to Cut Down Your Own Christmas Tree Near San Diego 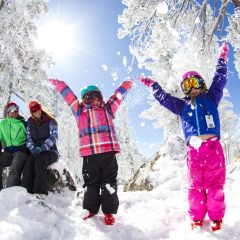 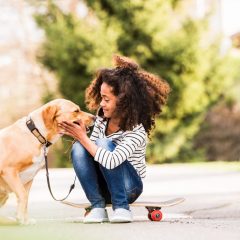 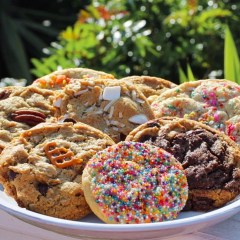 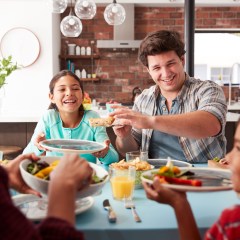 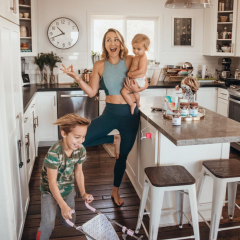 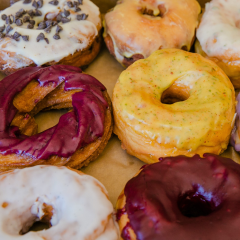 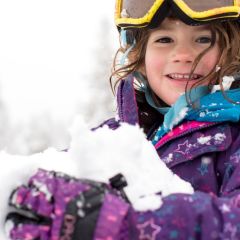 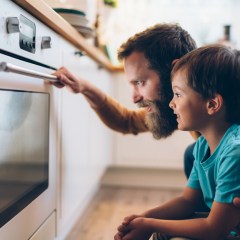 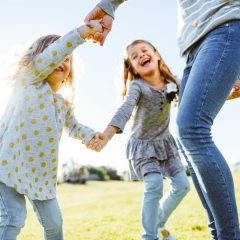 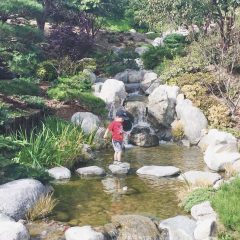 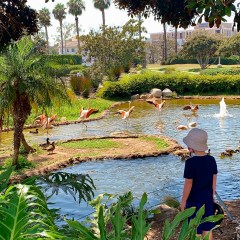 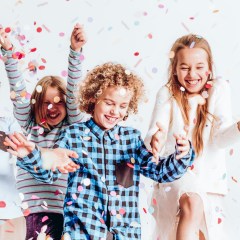 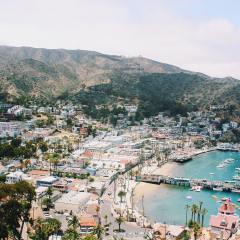