SpongeBob SquarePants and his gang are back! Paramount+, the new streaming service from ViacomCBS has announced that two new offerings featuring your fave pals from Bikini Bottom will air exclusively on the platform.

First up, get ready to feast your eyes on The SpongeBob Movie: Sponge on the Run beginning on Thur. Mar. 4. The first-ever all CGI SpongeBob film follows the main character and his bestie, Patrick as they head to the Lost City of Atlantic City to find Gary who has gone missing. Get ready for tons of flashbacks that also tell the story about how SpongeBob and Gary became friends!

In addition to streaming on Paramount+, The SpongeBob Movie: Sponge on the Run will also be released by Paramount Home Entertainment for Premium Video-On-Demand (PVOD) the same day. You’ll also be able to snag the film on VOD platforms for a limited time for $19.99

Paramount+ will also be hosting an all new original series, Kamp Koral: SpongeBob’s Under Years, the first ever spinoff. The prequel series will follow 10-year-old SpongeBob SquarePants and friends at summer sleepaway camp. Like the new SpongeBob movie, the show will also premiere on Mar. 4 with the first six episodes available to stream exclusively on Paramount+ for subscribers in the U.S. The remainder of the episodes will roll out at a later time. 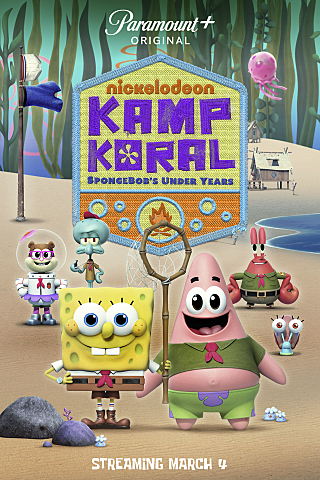 In case you missed it, ViacomCBS’ existing subscription video-on-demand and live streaming service, CBS All Access, will be rebranded as Paramount+ on Mar. 4. You can head to paramountplus.com to start your subscription.

All photos: Courtesy of Paramount+