Spook-Tacular Books to Read for Halloween 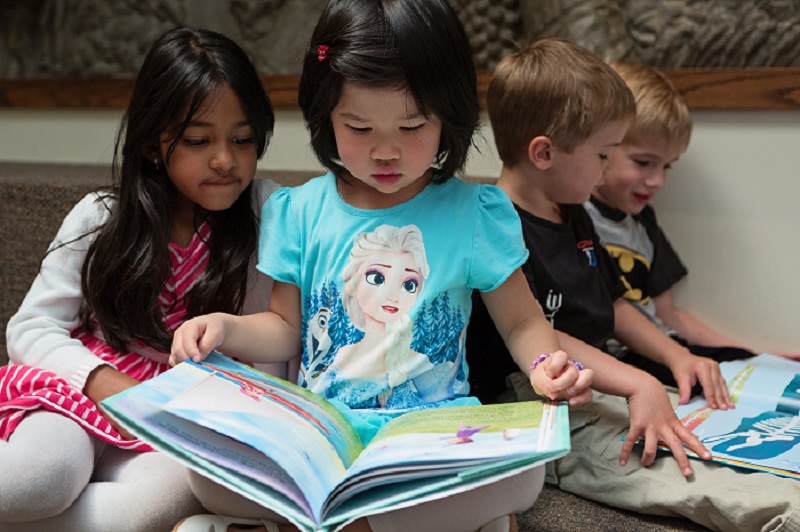 This year’s Halloween celebrations may be a bit different given these times, but there are still a number of ways to make October 31st feel just as festive as years prior. Don’t fret: get your costume ready and make this the happiest celebration of Halloween—plus, it’s a great time to share a spook-tacular book with your child!

Some may wonder if there are age-appropriate scary books to read to children and if we should read them. Reading supernatural fiction gives us a chance to examine what we may be afraid of, talk about our feelings and fears, and shine a light on those emotions. Scary stories help children learn how to deal with their fears in their own world. It’s a way to acknowledge that life isn’t always easy and to learn that it’s normal to feel scared and to talk to someone about it. Reading supernatural fiction as a family allows us to talk about what’s happening in the story, which may help children to then discuss feelings as situations arise.

Grab a cup of hot apple cider, some kettle popcorn, and one of these books for an adventurous, dare we say boo-tiful evening filled with a supernatural dose of mystery and adventure with your children!

The Legend of Spookley the Square Pumpkin by Joe Troiano, Illustrated by Susan Banta.
The Legend of Spookley the Square Pumpkin is sure to be a hit with any child eager for a trip to the pumpkin patch! Spookley is the only square pumpkin in the entire pumpkin patch and often wished he could be round like the other pumpkins. He is teased for being different until Spookley proved that being different can save the day. This story delivers a special message of tolerance and kindness and can help young children understand that it is alright to be different from their classmates.

Creepy Carrots by Aaron Reynolds, Illustrated by Peter Brown.
The creepy carrots in this Caldecott Honor-winning picture book may make you think twice before you enjoy these delicious vegetables! Jasper Rabbits loves nothing more than munching on the carrots that grow in Crackenhopper Field. They are the fattest and crispiest around, and Jasper Rabbit cannot resist pulling some to eat each time he passes by, until the day the carrots start following him…or are they?

Sherlock Sam and the Ghostly Moans in Fort Canning by A.J. Low.
Meet Sherlock Sam, Singapore’s greatest kid detective, and his trustworthy robot, Watson. Sherlock can never resist a good mystery and soon finds himself at one of Singapore’s most-loved historical attractions surrounded by ghostly sounds. The mystery becomes more intriguing as Sherlock proves that ghosts don’t exist…or do they? Part of the Sherlock Sam series of 12 books.

Eerie Elementary: The School is Alive! by Jack Chabert, Illustrated by Sam Ricks
Sam Graves is the hall monitor at the scariest school around. He teams up with friends Lucy and Antonio to stop this scary school from being scary before it’s too late! They must defend their classmates against the evil school, stop lockers from eating their friends, and participate in creepy science fairs. On top of all that, they must survive the perils of recess. The light scares and suspense in this series will have young readers screaming for more!

Goosebumps: SlappyWorld (series) by R.L. Stine
This series follows the popular Goosebumps Most Wanted. In this 13 book Goosebumps series, Slappy, the evil wooden dummy, comes to life to tell his own twisted tales and scary stories! The first tale, Slappy Birthday to You, will make you both laugh and shiver with chills. The story begins when Ian Barker gets Slappy for his 12th birthday. Ian soon realizes that his problems are far worse than having to celebrate his special day with his annoying sister and cousins. Welcome to Slappy’s World!

The Graveyard Book by Neil Gaiman
In this Newbery Medal, Carnegie Medal (the only book to ever win both awards), and Hugo Award-winning novel, it takes a graveyard to raise an actual human being. The book traces the story of the young boy Nobody “Bod” Owens who is adopted and raised by the supernatural occupants of a graveyard after his family is murdered. His adventures include being kidnapped by ghouls, meeting a witch, going to school, and entering a strange tomb. It’s a mesmerizing tale about the joys of childhood, the gradual transition to adulthood, and the dichotomy of life and death. An audiobook narrated by the author with a full production cast is available, consider listening as a family!

Sweep: The Story of a Girl and Her Monster by Jonathan Auxier
Sweep is the story of a girl and her monster. For nearly a century, Victorian London relied on orphans owned by chimney sweeps, known as “climbing boys” to clean chimney flues and protect homes from fire. The work was hard, thankless, and brutally dangerous.  Eleven-year-old Nan Sparrow is quite possibly the best climber who ever lived—and a girl. With her wits and will, she’s managed to beat the deadly odds time and time again. When Nan gets stuck in a deadly chimney fire, she fears her time has come until she meets and befriends a mysterious creature-a golem-made from soot and ash. Sweep is a heartrending adventure about the everlasting gifts of friendship and wonder.