Crochet an Alliance Between the Empire and the Rebels

Celebrate Star Wars day by crocheting finger puppets of your favorite characters with Star Wars Crochet Finger Puppets from Thunder Bay Press. Summon the force as you create an alliance between the Empire and the Rebels. Once you’re done, entertain your family by putting on a puppet show. 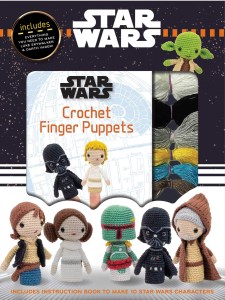 Crochet 10 characters from the Rebels and the Empire, put one on each finger, and then let the battle begin! The kit contains an 80-page instruction book with step-by-step directions and full-color photos, a crochet hook, safety eyes, stuffing, a metal tapestry needle and all the yarn you’ll need to create Darth Vader and Luke Skywalker puppets.

“Star Wars: The Rise of Skywalker” Comes to Disney+ On May the 4th