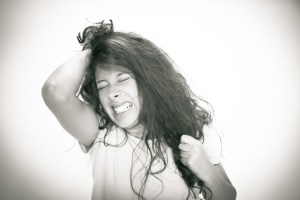 Being a parent is a serious test of patience. By the end of the day, you’re lucky if you make it through the (way harder than it needs to be) bedtime routine without totally losing it.

But don’t stress about getting a little mad every now and then. Science now says letting out your anger — as long as it’s not in front of the kids of course — is actually good for you. According to a study conducted by the Hebrew University of Jerusalem, people are generally happier if they are able to feel and express their emotions, even when those emotions are negative, such as anger or hatred.

We’re not saying it’s OK to get angry at your kids or spouse. But if you want to quietly close the door to your room to stew in your crabbiness, that’s A-OK.

“If you feel emotions you want to feel, even if they’re unpleasant, then you’re better off,” lead researcher Dr. Maya Tamir told the BBC News website.

To conduct the study, researchers asked 2,324 university students from the United States, Brazil, China, Germany, Ghana, Israel, Poland and Singapore what emotions they desired and the emotions they actually felt in their lives. Their answers were then compared to how they rated their overall happiness.

Researchers found that while people wanted to experience more positive feelings overall; they were the most fulfilled when the emotions they experienced matched the feelings they desired.

“Happiness is more than simply feeling pleasure and avoiding pain. Happiness is about having experiences that are meaningful and valuable, including emotions that you think are the right ones to have,” Tamir said in a press release. “All emotions can be positive in some contexts and negative in others, regardless of whether they are pleasant or unpleasant.”

So there you have it: the next time you’re having a really bad day, just let those feelings out!

Do you express your negative emotions as much as you express positive ones? Tell us in the comments below.