The Day I Broke My Daughter’s Finger Nearly Broke Me 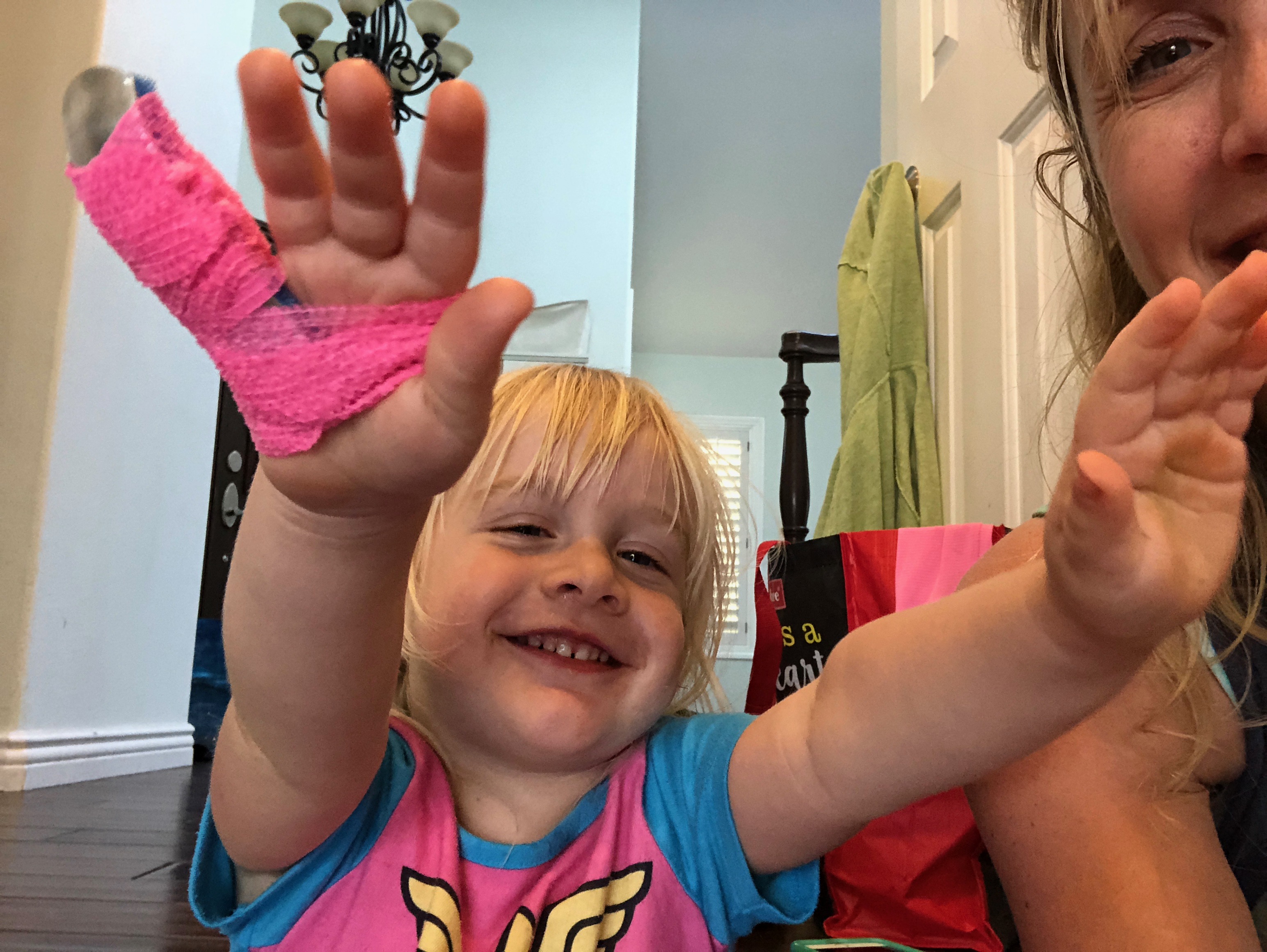 The kittens were about to run away.

My three-year-old daughter and I had just walked inside from the street and the kittens were trying to make a run for it. They were our twelve-week-old foster kittens and they weren’t supposed to be outside. I reacted, screaming simply: “The kittens!” as I lunged for the door handle and pulled it closed.

The thing is: she hadn’t wanted the kittens to get out, either. She had reacted, too—by holding her chubby arms on either side of her body and spreading her tiny fingers in a dramatic, “Don’t pass!” sort of grand gesture. What I hadn’t seen was that her little finger was just inside the hinge of the door.

That’s when I heard my daughter scream, a wail so real and so deep that my mommy brain knew instantly that this was more than her normal cry. This wasn’t a stubbed toe or a lost doll. Something was definitely wrong.It all happened too quickly.

I’ve always wondered how parents just know when their kids have broken a bone. Don’t small kids always cry when they get hurt? How do you know when it’s something worse than just a bump or bruise? How do you know they’re not just trying to get attention? Now I get it: you just know.

When we got to the urgent care center, I got to tell the story in triplicate.

Receptionist: What happened? I shut the door on her finger.

Nurse: What happened? Mommy shut the door on her finger.

Doctor: What happened? It was all my fault.

The guilt poured out of me like sweat. How could I have hurt my own child? I knew it was an accident, but still—how could I not have noticed her finger was there? Why did I panic? Why didn’t I just let the kittens run through and scoop them up when they were outside?

Ultimately, we did an x-ray and saw the damage: a small break on the tip of her little finger. It was minor and would heal just fine—but she would need to wear a splint for three to four weeks.

And so for nearly a month she wore that sad little splint like a Scarlet Letter. Every time someone said, “Awww, what happened?” I had to explain: “I shut the door on her finger.” And soon she said it, too: “Mommy closed the door on my finger.”

It broke my heart a little every time I heard the words.

But there was something else I learned as I talked to other parents, and it’s that I’m not alone. In fact: I’m Every Mom.

“I broke my daughter’s leg when we went down a slide together,” one mom told me.

“I lost the tip of my finger,” a nurse told me matter-of-factly about a similar door-slamming injury. “And it grew back!”

“My kid broke his arm when he spun off a playground merry-go-round that I was pushing,” a dad admitted.

And it made me realize that we’re all just doing our best when it comes to keeping our fragile little people safe in our care. Accidents happen.

“Every parent will inevitably hurt their child by accident at some point—often more than once,” Los Angeles pediatrician Amin Davari told me, adding that he sees such accidents almost every day of the week in his practice. “It seems like that—and the terrible guilt you feel afterward—are two guarantees of parenting.”

“I try to remind all these guilt-ridden parents that they can’t possibly protect their kids against the thousands of daily dangers that life presents and not ultimately let one slip by—even if they played a part in it,” Davari said. “Bones mend, scars heal, nails grow back—usually—but the care a child receives after an injury is what shows them the depth of a parent’s love.”

So it’s not just me. And it’s NOT JUST YOU, if you have ever accidentally done something that hurt your precious baby.

Naturally, I still feel terrible when I tell this story. And I’m now a little OCD about doors—freaking out perhaps a little too much when my kids start fighting around doorways.

But I don’t feel alone. And I know I did my best by swallowing all that guilt, letting it go and helping my daughter heal.

“I still remember when my own mom accidentally closed the car door on my thumb as a child,” Davari told me. “The tears, guilt and grief on her face in that instant gave me a better sense of her love for me than I had even realized existed up until that point. And that’s the only part of that injury that I still remember.”

Well after the splint comes off, after the pain subsides and the bones heal—here’s hoping that all my daughter remembers is the love.

ABOUT THE WRITER Melissa Heckscher
MelissaHeckscher.com

Melissa Heckscher is a writer and mother of three living in Los Angeles. She is a former staff writer for the Los Angeles Newspaper Group and the author of several books, including,The Pregnancy Test: 150 Important, Embarrassing, and Slightly Neurotic Questions (Quirk Books, 2011).
MORE FROM Melissa:
To the Crazy Person Living Inside My 3-Year-Old, When the Bully is Your Brother, What It's Like to Raise a "Spirited" Child
Red Tricycle > Parenting Advice > The Day I Broke My Daughter’s Finger Nearly Broke Me