The day my child pushed your child 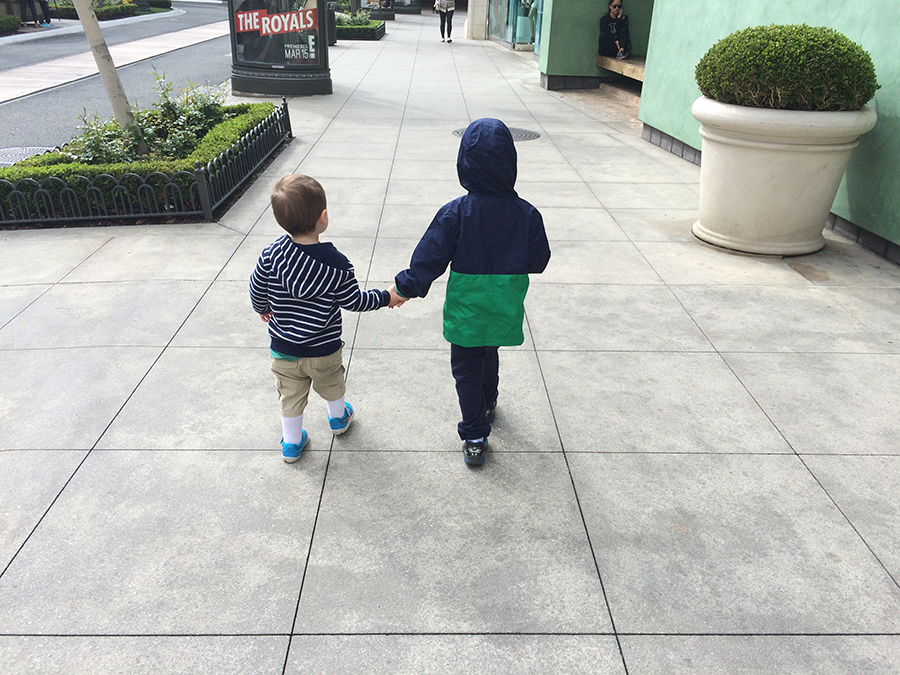 The day my child pushed your child will change the way I think about parenting and mothers forever. It was a day like any other day. The boys and I woke up, we colored, we played outside, we ate breakfast and eventually everyone had rest time. I have two boys; Mark (4) and Henry (2). Thankfully, despite Henry’s desperation to stay awake and skip naps most days, that day was not one of them. After his nap, we had plans to meet up with a friend and her two children at an indoor playground.

Mark and Henry were both excited as we entered a wonderful play space filled with play houses, toys, a race course complete with an assortment of cars and even a bounce house.

The moment was perfect. My kids were having the time of their lives and burning energy with other kids while doing it. My two year old was like a lot of two year olds- he was not a fan of sharing.

Knowing he needed extra attention I was watching him carefully, but also having a conversation with my friend. All of a sudden I saw it. My two year old pushed a little girl out of a raised play house that he deemed his. Thankfully the floor was carpeted and the little girl was okay but the fall was enough to scare her and more than enough to terrify me. So many emotions were running through my head. I jumped up and ran to the little girl to make sure she was okay.

As a mother you’re horrified when your child does something to hurt another child.  Whether it was accidental or on purpose, physical or mental, whether you were right next to them or in another room, it’s a tough thing. Here I was, five feet away and yet I couldn’t stop it from happening. I was frustrated I wasn’t fast enough to prevent it (Henry was just in the beginning stages of understanding right and wrong), and I knew helping him to understand his wrong doing would come with an unpleasant reaction.

Of course, my immediate response to the mother was I am so sorry, is there anything I can do; do you think she is hurt? As the little girl’s mother grabbed her daughter, the words came pouring out of her mouth, “that was unprovoked, what is wrong with your child,” and then she went on to say, “I’ve never seen a child do that, my children never do that, there must be something wrong with your child,” as she repeatedly rolled her eyes and got more and more irritated with me and my child I became speechless.

My jaw hit the floor and all I could say was, “I am so sorry, he is really coming into the terrible two’s and I am doing everything I can to help him understand the difference between right and wrong, sharing and how to play with others.” In my head I was screaming, “lady he’s 2!” Then, she started saying things under her breathe that I couldn’t understand, but really didn’t have too, because I knew how angry she was and whatever else she was saying was mean and at me.

As she walked away, I took my son into the playhouse and started to cry silent tears, which since my second son, tears came few and far between. Tears are not a bad t, however, they do raise questions from my four year old and I’m on “go mode” all day every day, which doesn’t allow time to think about feelings and definitely no time to express them.

My friend poked her head into the window and checked on me. I was so embarrassed, again, but this time it was for crying in a playhouse. Friends are important during the trenches of motherhood. I’m so appreciative of kindness and sincerity now more than ever, especially during a time when my vulnerability was at its peak. I choked back the tears and I think I said, “I’m fine” but all I could think was, that woman thinks I am a bad mother with bad parenting skills. Was she right? I knew she wasn’t right, but when you’re exhausted from being pulled in every direction every day your mind races.

Her words had shaken me to the core.  I didn’t know this woman and she didn’t know me and she was judging me after one incident.

We didn’t stay much longer at the playground. I felt as if everyone was staring at me, judging me and hating my child and me. It was more than I could handle.

When I got home it was time to get on with my day. I sat both my boys down and talked to them about the incident at the playground. I used lots of phrases like- it made the little girl sad when you pushed her and it’s important to say you’re sorry when you make someone cry. The boys took what they could from the conversation and then we moved on, I had to move on.

Dinner was going to be my savior (I’m a serious foodie!). It was going to give me something good to focus on and something I could control. I took my time and enjoyed every minute of cooking. The dinner I created was delicious: roasted chicken with a delicious maple syrup glaze, fresh green beans and of course curly pasta a favorite at our house.

We sat down and ate as a family. Afterwards, I gave my boys a bath, tucked them into bed, kissed them goodnight and told them I loved them.

After they were asleep, I sat on my couch quietly, sitting and thinking about the day; I replayed the moment over and over again. All I could come up with was: I rushed  to the woman’s daughter, apologized, offered help in any way I could, I talked to my two year old and told him how sad he had made the little girl by pushing her. There might have been more that I could have done, but in that moment it was all I knew to do.

At the end of the day the little girl was completely fine, not even a scratch. My ego was bruised, but I was ok as well. My take away from the experience was I can’t control other peoples’ feelings, reactions or behavior and sometimes not even my own children. But, I can control my reactions, feelings and behavior. Hopefully, I will treat other situations with compassion, sincerity and honesty as I did with this one. And at night when I go to sleep I will know I have done everything I can and that has to be enough. I will know, I am not a failure as a mother, and the day my child pushed your child will make me stronger, more compassionate and empathize with your worried and scared reaction at me and at my child.

As a mother, it allows me to understand my mother, other mothers and my grandmothers better.

ABOUT THE WRITER Mary Moran
Hail Mary Food of Grace

A wife, mother of two and chef with deep roots in the Culinary Industry in Los Angeles, California but an Oklahoman at heart. After surgery she reconsidered her goals and dreams of cooking in restaurants and catering and took to writing about everything she loves in kids, cooking and food.
MORE FROM Mary:
Flying with kids, Which cook are you?, Kid friendly sandwiches
Red Tricycle > Spoke Contributor Network > The day my child pushed your child