After becoming viral sensations in early 2017, the “It still works!” pregnancy announcement couple have some adorable family updates.

First, a little backstory: in 2014, former dirt bike racer Todd Kreig was paralyzed after a biking accident. Following the accident, Kreig met Amanda Diesen, a recovery specialist at Kreig’s rehabilitation facility. Kreig and Diesen didn’t let their relationship stay professional for long… and before Kreig could pop the question, they found out they were pregnant. Hence, the “It still works!” pregnancy announcement and the birth of a viral meme. 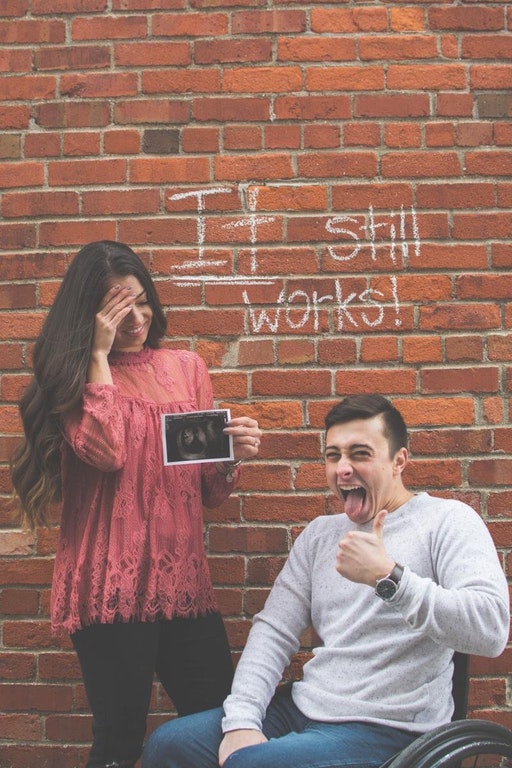 In August 2017, Diesen gave birth to their son, Everett Jason Kreig. Rhett, as they’ve nicknamed their son, is growing steady and the former couple turned surprise family of three is loving every second of it, the challenges of newborn parenting included.

“The tough part for Todd is that he can’t help out as much as he’d like to,” Diesen told TODAY Parents. “If Rhett gets fussy he likes to be walked and bounced and rocked, but Todd is unable to do that.” Even so, Todd is not a hands-off parent. “We’re thankful, though, to have learned early on Todd can do a lot more than we originally thought,” Diesen said.

Rhett and I got to watch our favorite person speak at the Special Olympics banquet. Thankful for my boys.

Do you have a funny pregnancy announcement story? Share yours in the comments below.