The Most Ingenious Ways Kids Have Gotten In Trouble 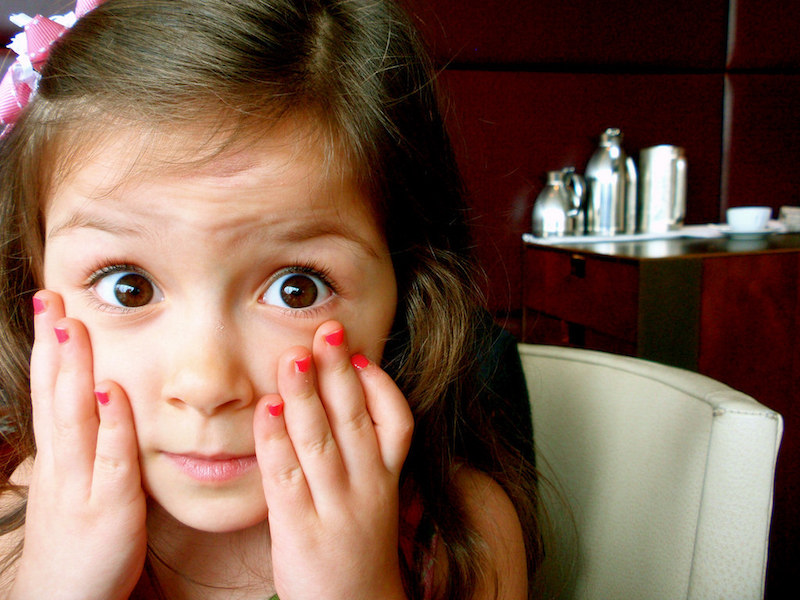 Kids have an impressive skill set when it comes to trouble-making. The majority of the time that talent will make you want to tear your hair out, but every now and then kids do something so clever, it’s hard not to appreciate the genius behind it. Parents of Reddit recently shared some of the very creative ways their kids got into trouble. Here are a few of the best.

It’s Snowing Messes!
“My son (3 at the time) shredded a block of packing foam into the back of the floor fan like it was a cheese grater and made it snow in July. Suddenly there were tons of little white dots floating down the stairs. I hear giggles and ‘it’s snowing’. I have never been so impressed and so angry at the same time. It’s been four years and I still occasionally find those damn foam pieces.”

Cold Criminal
“Sneaking ice cream out the freezer. It was in one of those transparent tubs, and they would eat it from one side and put it back so that the side, which was still full would face me and I couldn’t tell they had eaten it (not being a fan of ice cream I rarely opened it).

When finally I decided to get the ice cream out for their pudding one day, I took out two tubs, both of which had the thinnest slither on one end on the tub creating the illusion that they were full.”

Get A Job
“I had to punish my then 7-year-old daughter not only for sneaking online without permission, but for attempting to start a credit line with BillMeLater. We found out when a letter from BillMeLater arrived in the house in her name, rejecting her on ‘lack of references or employment’. She told us she was on Toys R Us’s website and wanted to buy something.”

The Frame Up
“I have a 3 year old Tasmanian devil of a boy, and a 9mo baby girl that’s not even really crawling but gets around well with the army crawl. My son comes running to me ‘Mommy mommy come look Scout made a mess!’ I follow him out to the balcony and one of my planters had half the flowers pulled out of it and thrown over the edge. Scout was sitting there by it with a little bit of dirt on her, but my son had much more dirt on his hands. Plus the fact that most of the flowers had been thrown over the edge, which she is not capable of doing.

My 3yo son destroyed a planter, then lured his baby sister out to the crime scene so that he could frame her.”

Just Following Directions
“My daughter is 3. I told her to turn off the TV and go upstairs (where the beds are). She complies a little too willingly. I hear footsteps up the stairs. Then I hear the Peppa Pig theme. I walk upstairs and find that she proceeded immediately from the living room to my office, plopped down in front of my computer, got herself to YouTube and got herself to Peppa Pig.

Now, granted, there were some things making this easy. We’re Mac users. There was a YouTube tile for her to click. And I’m certain that there was likely Peppa Pig available on the front page due to the fact that we watch tons of Peppa Pig on YouTube. Still, it was some pretty impressive mouse work for a pre-schooler.

So I say ‘I told you to turn off the TV.’ She stands up, points at the computer and says ‘That is NOT a TV!’

The Great Candy Caper
“My daughter is 5. She gets mad at us because her candy is carefully monitored (no more than 3 pieces per day, and no candy after 6 pm). Well, she decided to start hoarding candy whenever she could. It started off simply enough; a mini Twix under the pillow, a couple of mini snickers hidden in the sock drawer. My wife found the ones in the sock drawer while getting her clothes ready for the next day, and I found the one under her pillow while tucking her in. She pouted for a while, as expected. Then she seemed to stop.

Now any parent out there can tell you, kids don’t just stop without some kind of breaking point. I knew something was going on when she didn’t ask for candy on a Saturday. I convinced my wife to take the kids to the park, and started searching her room…

The brilliant little brat had a stash I couldn’t believe. Several mini candy bars taped to the back of her closet, a mini Twizzler rolled up in the inside of a pair of socks, a ziplock of jelly beans taped to the back side of her dresser, and a couple of mini Reese’s cups tucked in her earing box. The one that surprised me the most though, she took my box tape and stuck a bunch of nerds to a piece of it, then stuck it to the underside of her bed. Just two feet of captured nerds stuck up under there. Some of the tape just had colored dots on them where nerds had previously resided. Apparently she would peel it back a bit, pull a few off, and stick it back up there.

Needless to say, the candy was put up high, and we handed her what she picked out from then on.”

Sticky Fingers
“When my daughter was about 10, she was in the bathroom and had just used lotion. As she left the bathroom, she wiped the wall while turning off the light switch. To her dismay, she noticed where she had touched the wall, the paint had become discolored. She tried removing the discoloration to no avail, so she decided a cover-up was in order. She basically took hand lotion and applied a thin, even coat across the entire bathroom wall until the entire wall was evenly discolored.

I discovered this trying to do touch-up painting in the bathroom and noticed that the paint wouldn’t stick to the wall.”

Hands-Free Hitting
“My youngest, now 5, was pestering my oldest, now 8, a couple of years ago. He kept hitting and poking and being pretty annoying. I told him he needed to use safe, kind hands and keep his hands to himself.

Little man processed this for a few seconds, then whacked his big brother with his forearm while making sure to keep his hands out of the way. He looked at me, wagged his fingers and did, “My hands were safe and kind!” Poor kid still got sent to his room.”

CEO In-Training
“My daughter at the age of 5 was ‘employing’ her kindergarten friends to dig up ‘special gems’ (which were actually just plastic craft sparkle things) then she was selling the gems to other students for $2 each then going back and paying her little school friends with 50c icy poles from the canteen. And her friends who found the most gems would earn “commission” and occasionally would be paid a packet of lollies $1.10. It got to a point were kids were begging to be “employed” by her as the payment was so good and it created some issues as she had to fire some and employ others.

This went on for about 2 months, until one day my daughter came home with $22. Next day I was called to the school to have a meeting about my daughters business ventures, teachers were actually so impressed by her ability to do something like this but it was getting to the point were some kids would spend all their lunch money on these things.

That day I had to tell my daughter how incredibly proud of her I am, because her mind is so advanced but it’s not the right thing to do at school.

Since then I’ve told her she can use her skills with my work and she’s constantly finding ways to up sell all the clients. Wish I had the skills she has.”

What are some of the clever things your kids have done that got them in trouble? Share your stories in the comments!