The Queen of Questions 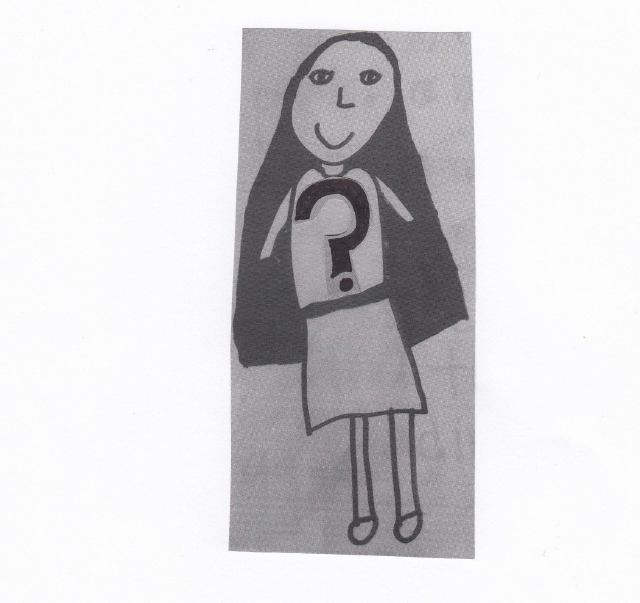 The question came out of nowhere.

To be fair, most questions from six-year olds are pulled from alternate dimensions that only six-year olds can access. Like when we were swimming together for hours and I picked her up to toss her high and she asked, “dad, what would happen if I only ate ham and nothing else?” Or the time we were racing toward the busy intersection near her school, trying to catch the green light before the crossing guard lowered his STOP sign and retreated back to the corner, and she said, “Dad dad daddaddad DAD! Do you think I would look the same if my name was Erica instead of Ava?” Nothing like random questions that stop you dead in your tracks right as lead-footed drivers aim their vehicles at you.

As a parent, you understand that answering questions, ranging from logical and simple to abstract and complex, is part of your job. It’s why when you take your newborn for his or her first checkup the doctor says, after examining their eyes, ears, and mouth, “this one is going to ask some doozies”.

Most of the time, you’re prepared for it and you always, regardless of circumstances, do your best to answer the question. One way to assure that you lose the battle of random questions is to respond with questions of your own. You’re not a prosecutor of Jeopardy contestant. So when my middle daughter inquires about a ham-exclusive diet, I can’t respond with, “Why ham? Why not something else you eat more often like chicken fingers or yogurt? Do you even like ham?”, but I can say, “Probably…we should try it!”. This results in laughter and “of course not”. Or when she wants to know if her appearance would be different if my wife and I chose a different name for her, I say, “There’s only one way to find out…let’s change your name!” My daughter laughs and says, “NO!!!!” and we continue to cross the street.

Strange questions don’t reveal themselves every day, but when they do, I’m always prepared. I believe that answering questions pulled from alternate dimensions is a dad’s speciality. Moms can answer them without a problem, but most moms are overtaxed as is with so many parenting responsibilities that dads become lieutenants of the Bizarre Questions Department. It’s a role that I relish.

Which is why I was so disappointed in myself for having the rug pulled out from under my feet with, “Dad, do you like crying?”

When Ava asked me the question, I was sitting on the edge of the bathtub, filling it for her bath. I tried to apply logic where it didn’t belong.

Is she asking because of how I’m sitting? Did it look like I was crying? Was I crying? No, of course not. Has she ever seen me cry? Should she? Did I see my dad cry by the time I was six? Is it important for a child to see their father cry? Is this especially true for girls? Is she asking because she has never seen me cry and believes that a 21st Century father shouldn’t be ashamed of crying? Does she think of me as an emotionless robot? Would she like to see me cry? How often? And for what reason? Is it okay for anyone to like crying? Do I scold her for crying? Should I be more emotionally supportive when she does cry? Am I a terrible father? Should I start crying now?

Then I remember that she’s six-years old and six-year olds have access to other dimensions and on certain occasions, they pluck questions from those dimensions and present them to the person standing nearest to them. Ava wasn’t commenting on gender roles or men’s inability to express their emotions. She was asking a random question.

Matthew Daley has held many interesting jobs over the years, from soccer referee to dishwasher to radio dj to microfiche filer to teacher to writer, but the most important - and the one that's endlessly inspiring, rewarding, and funny - is father. (www.matthewjdaley.com)
Red Tricycle > Voices Contributor Network > The Queen of Questions