The Question I Dread: “Do You and Dad Give Us Presents Instead of Santa?” 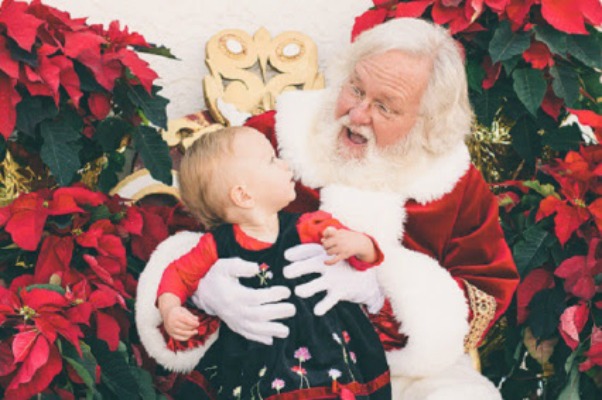 I had just gotten out of the shower, wet towel still wrapped around my head when our youngest, Nick, burst into the room and looked me squarely in the eye and asked the question I was dreading. It is a question that inevitably comes up in countless households as the holiday season is quickly approaching: “Mama, are you and dad the ones that give us presents instead of Santa?” (Insert my heart dropping to my stomach here).

Seriously? You are asking this now when I have one sock on and am rushing to get everyone ready for the day? No warning, no time for me to prepare. As I flopped onto the bed, he snuggled in next to me glancing up with those questioning blue eyes. My mind was racing. I was so prepared with the older two. With them, when I sensed the question was coming, my husband and I talked about how we would address it and we felt confident with how to broach the topic. This, however, was completely unexpected. There are still leaves on the trees, for Pete’s sake! Our breakfast conversation was about watching the Halloween Charlie Brown special tonight! Not to mention that he is only seven. Isn’t this question premature?

My middle child, Julia, is very inquisitive and was my baptism into the world of breaking the news. When she was nine, she and I were riding in the car together and she asked if Santa was real, which was actually beneficial because I could mask my nerves as I faced the reality that she may be crushed by the fact that we have not been truthful with her.  My face may have portrayed my inner guilt but a glance in the rearview mirror showed her to be gazing out her window rather than staring me down.

I went into my rehearsed monologue about how the spirit of Christmas is what is true and real – that Santa is a way for us, as parents, to pass along the tradition of that spirit to our children. Believing in the spirit of Christmas- as embodied by the character of Santa – allows us to share the magic of giving and allows us to practice believing in something bigger than us that isn’t tangible. The spirit of giving is what we believe in. She took the news surprisingly well, which shocked me given her tendency towards black and white thinking.

A few months after my conversation with Julia, Paul and I decided to raise the discussion with our oldest, Drew. He was old enough that we felt it was appropriate to talk to him about Santa. He is our creative thinker who is fiercely loyal, compassionate and loves big. His ability to outwardly express caring of others makes him who he is.

As we sat on the edge of his bed with him, surrounded by signs of his adolescent boyhood, and gently broke the news, his face dropped and huge crocodile tears welled up in his eyes. Quickly those tears gave way to a look of pure disappointment. He flung his body across the bed, buried his head in the pillow, shoulders shaking as he sobbed. Panic ensued. We knew he may have questions and be disappointed but instead he looked from his tear-stained pillow, his face now showing anger. “You lied to me!  How could you? I am never going to believe you again!”

How do you recuperate from THAT?! He was right, wasn’t he? We had been dubiously tricking him for years. I, in fact, pride myself in creating elaborate displays of Elf on the Shelf mischief. The routines of Paul and my childhood played out every Christmas Eve including cookies and milk for Santa, carrots and celery for the reindeer. He was right. We had purposely deceived him.

What felt like hours later, after the bomb was dropped and we made countless attempts at rationalizing our actions, we made some headway in explaining our reasoning to Drew. He was not impressed by our story about teaching the spirit of giving but slowly he accepted our many reasons for keeping the story of Santa alive in our home. Maybe he was our black and white thinker! I don’t think, however, he was ready to let go of his deep disappointment in us for our not being truthful. That crushed me. This wasn’t some white lie. It was a calculated effort to trick our kids year after year just as our parents had lovingly done for us.

So, when Nick surprised me with his question, the memory of feeling as if I had crushed Drew’s trust in me was where I went in my head. Selfishly, I wasn’t ready to tell him the truth. He is our youngest and I want to keep the traditions alive in our house a bit longer. He is only seven and I am just not ready…

In that moment I felt a flash of anger. Who had planted this seed of doubt in him? No way would the older two mentioned this. They were already scheming of all they ways they were going to get our elf into mischief this year. Allowing them in on this fun gave them a great sense of excitement for the season. So who, then, had told Nick Santa wasn’t real? When I inquired as to why he was asking, he told me the name of a classmate, who will remain nameless, who told him Santa wasn’t real.

At that, all my years in the classroom where I showed great compassion for all students rushed out the window. How could she?! I resisted my attempt to immediately pick up my cell phone and call this little girl’s parents to unleash my anger that their daughter was telling a class of second graders Santa is a LIE! Nick must have sensed my blood boiling and quickly added, “She isn’t mean, Mama. She just told me it is her mom and dad that give her presents, not Santa.” His voice snapped me back to reality. This was normal. This is how it happened. I had to be okay with that.

Yet, I wasn’t. I looked at Nick and said nothing for a very long moment, thoughts racing through my head. Then I simply asked him what he thought. He looked back at me and said, “I think he is real.” Here was the perfect opportunity to be truthful. I don’t want to lie to my kids. This was the moment where I could be completely honest.  I just couldn’t do it.  “Then, there you go,” was all I said.  Maybe not truly a lie? Oh, who am I kidding? I know and he knows that I basically just told him outright that Santa is, in fact, real.  He was satisfied with that and returned to the family room to watch Wild Kratts.

Whether or not you agree with my decision (heck, I am not sure I agree with my decision), I am sure you have faced this situation with your own children. If not, prepare for it. Thinking about it now, part of my fear is that when they question Santa, they will question other things that aren’t tangible.  What if they question Jesus in the same way? Their own faith isn’t tangible. Their belief in themselves is not tangible. Neither is their belief that the world is filled with good, yet I don’t want them questioning those things!

The bottom line is this:  parenting is crazy hard. We may not do it right, we aren’t perfect, and we just have to be okay with that. In the meantime, my Pinterest feed will continue to fill with Elf on the Shelf ideas and my tree will be cluttered with presents from Santa….at least for one more year.

ABOUT THE WRITER Erin Loritz
Hiding in the Closet With Coffee

As a former teacher and principal I should be good at "mom-ing," right? But, it's so hard. I couldn't survive parenting without my best friend, Amy. We started writing our stories to create a community where we wouldn't have to hide in the closet with coffee just to get through the day.
MORE FROM Erin:
DROWNING IN “WHAT IFS”, THE PERFECT “ANTI-SOCIAL” SUMMER
Red Tricycle > Spoke Contributor Network > The Question I Dread: “Do You and Dad Give Us Presents Instead of Santa?”