The Scoop on Mario & Luigi: Paper Jam, the NEWEST Game From Nintendo

The dynamic duo of Mario and Luigi was as much a staple of your childhood as your Easy Bake Oven and lanyard key chains. While the toy things are now history, Mario and Luigi are not. On January 22, 2016 Nintendo’s timeless characters are making a comeback in a big way with the brand new game Mario & Luigi: Paper Jam. Read on for the scoop on Nintendo’s newest release that’ll make you feel like a kid again alongside the next generation of Mario and Luigi fanatics. 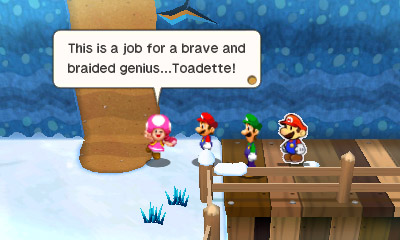 First Things First
The just-released Mario & Luigi: Paper Jam* is the first time ever two of Nintendo’s biggest franchises unite. For those of you keeping track, Mario and Luigi series and Paper Mario series have never come together in one big mash-up game like this before. Expect the same Mario and Luigi hijinks, but with new and hilarious twists.

Game On!
Get ready to see double. The game features Mario, Luigi and Paper Mario as they team up to battle their way to save two worlds. This means double the adventures, double the fun and double the mischief in the Mushroom Kingdom.

As you embark on your adventure, you’ll call on the talents of Mario, Luigi and Paper Mario to solve puzzles, track Toad, chase Nabbit and race Yoshi to complete your quests. To save the two worlds you’ll need to take advantage of Paper Mario’s awesome skills of slipping through cracks, folding himself up and making copies of himself as he spills out of the pages of a mysterious book. You can even show off your dance moves by strutting your way through battles with other giant papercrafts from Bowser’s army. 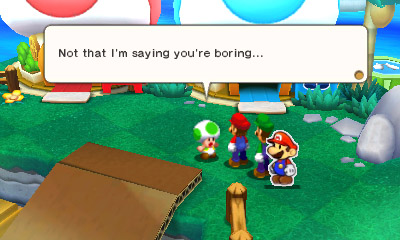 Cool Highlights of the New Game
In Mario & Luigi: Paper Jam you’ll dig that you can play as three characters…at the same time. Look out for opportunities to collect awesome in-game cards by tapping your favorite amiibo figure and don’t forget to hop on a racing rocket to overcome your troublesome enemies.

The Takeaways
Nintendo’s newest game will not only bring back happy memories of your own childhood overcoming your enemies with Mario and Luigi by your side, but the game is also a great way to create new gaming memories with your own kids. For more details and a full review of the game, hop on over to Common Sense Media for their take on Mario & Luigi: Paper Jam.

Are you ready to experience Mario & Luigi: Paper Jam? Get the game by clicking here.

What’s your best Mario and Luigi memory? Are you stoked to play this new game with your kids? Tell us what you think in the Comments below!