The Simple Magic of a Costume 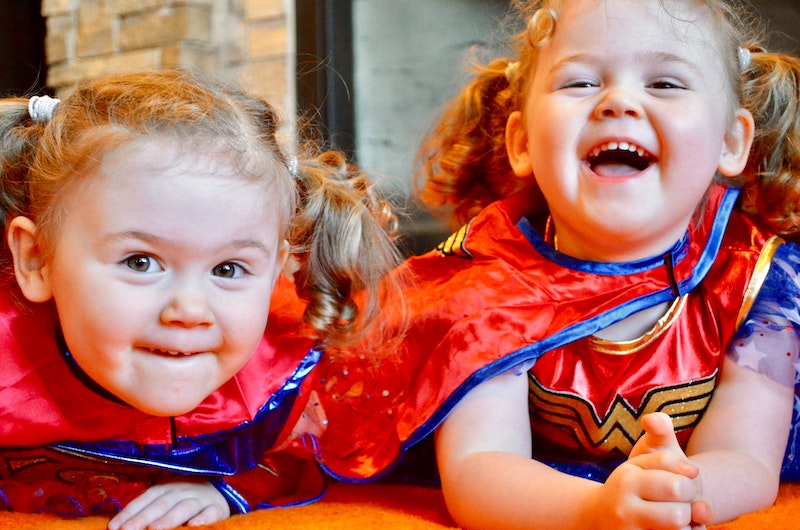 I often wonder why costumes are so special to children. One of my children would get stuck on a particular costume for months—wearing the same thing every day. As a preschooler, he seemed to really believe that he would fly a rescue helicopter if he just had the right gear on. He would leave his “rescue helicopter pilot suit” by his bed at night, a suit which included the jumpsuit, rain boots, and a bike helmet to which he attached the plastic lid of a fruit container and some pipe cleaners to look like a mask and microphone. One night he showed up at my bed, fully dressed in his rescue helicopter pilot suit, telling me the airport had called—there was an emergency and he had to go fly the helicopter. It was 3 a.m.; he was 4 years old.

Then he moved onto the Santa costume—beard and all. He wore that for more than a month. He wore Santa pajamas to Christmas Eve service and threw a sport coat and bowtie on only to appease me—and to perhaps get even higher on Santa’s good list. After all, he had asked Santa for some pixie dust for Christmas that year so that he could fly like Santa’s reindeer.

Though he never flew a helicopter or like Santa’s reindeer, there was a common thread with these costumes—it seemed he really believed that the costume would ignite a bit of magic inside of him and he could then do the impossible. Or at least imagine the impossible in such real terms that it would change his very being. Regardless, there was a belief that magic is possible if you can only kindle that yearning within one’s self.

As adults, many of us also seem to be trying on costumes—costumes of the right job, the clothes which portray success, the good school for our kids, the impressive home in the right neighborhood, a place in the sought after social circles. These adult costumes are expensive, time-consuming, and surface-level for too many of us. We seek them out not to kindle something wonderful and inspiring inside us, but rather to fit others’ expectations of us. They are not about flying a rescue mission to save someone else, but rather to save ourselves from criticism or rejection.

We adults no longer believe in magic at all, let alone any magic within us—we understand the science behind what seems impossible; we know if it is too good to be true, it is a scam; and we are too busy to notice the enduring power of our actions, words, and relationships. We can become so frantic and drained trying to keep our heads above water that we are not still enough to hear the yearning within us. So many of us are overwhelmed with bad news and stress that we can’t see any magic in this world or believe we have any sort of power to change the world around us for the better. For so many of us grown-ups, we don’t see the disconnect between our inner yearnings and gifts and the artificial costumes of our lives.

What would our world look like if we adults sought costumes which kindle something wonderful in us? What if we adults recognized that kind words, selfless acts, and deep relationships are so powerful the effects cannot be explained by science alone? What if we took a bit of this time in quarantine to be still and listen for our yearnings, to see that we don’t need the expensive or “right” costumes to be happy, to understand the disconnect between our yearnings and our costumes? What if we started to admit that even though we are grown up there is yet a little flicker of magic within us and worked to build a costume that nurtures that magic into a roaring flame? What hope could we inspire, what joy could we bring, what change could we embody?

ABOUT THE WRITER Heather Harrell
Heather lives in Louisville, Kentucky with her husband, three sons, one dog, one bearded dragon, and one fish. She is a lawyer, but currently home with her children. When she is not mom-ing, she likes to spend time with her family and friends, watch documentaries, and go for a jog!
MORE FROM Heather:

Red Tricycle > Parenting > Adulting 101 > The Simple Magic of a Costume