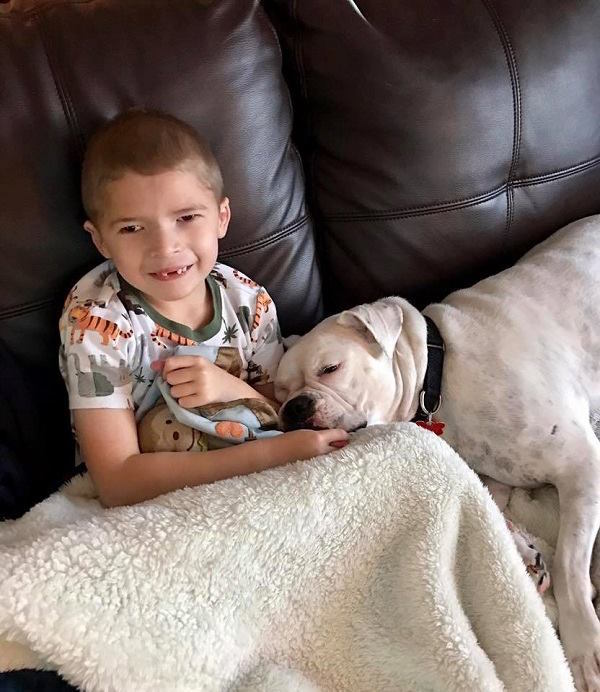 There’s something magical about the relationship between a child and their dog, but for one young boy meeting his new four-legged best friend was life-changing.

Despite being born addicted to opioids, eight year old Connor is a normal boy except for one thing: he doesn’t speak. Since Connor is non-verbal, it limits his social interactions to a very small group of people. Connor’s adoptive mom, Brandi Guillet, who shared her story with Love What Matters, believed that getting him a dog of his own could help him develop a special friendship.

A visit to a local Boxer rescue shelter turned out to be fate when one of the rescue workers explained that some of the dogs were deaf and responded to signs, something Connor used to communicate as well. One dog, Ellie, instantly bonded with Connor, following his sign commands and licking him lovingly.

Adoption fees turned out to be expensive for the Guillet family, however, so they agreed to foster Ellie. Connor and Ellie quickly grew inseparable, but they were meant to return her to the shelter eventually for adoption. One day Brandi got the call, Ellie had been adopted. Her instant heartache turned to joy, however, when they informed her that a woman in New Jersey named Tina had paid the adoption fees for Connor’s family and they would get to keep Ellie. One kind act from a stranger left Connor with a life-changing best friend. It doesn’t get much more inspiring than that.

Have your ever been the recipient of a random act of kindness? Share your stories in the comments.