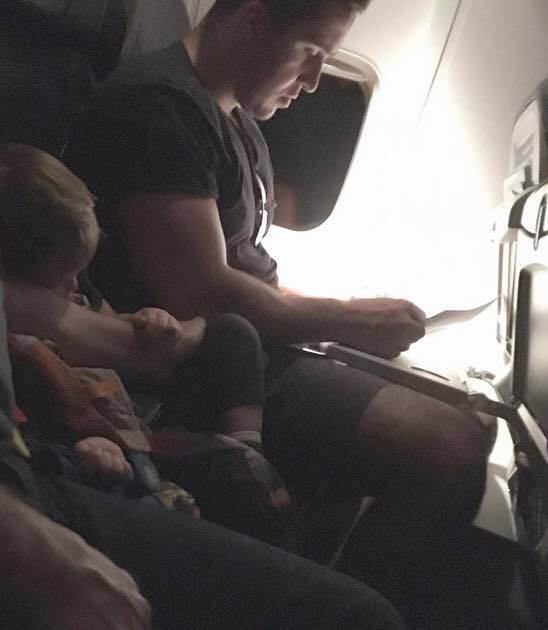 A mom traveling cross-country with her toddler was already nervous when they boarded their lengthy flight, but when she saw who they would be sitting next to, she really got worried. She was nervous the “macho” looking young guy filling the seat next to her son would make the trip with a squirmy toddler even tougher. Lucky for her, she was in for a major lesson in judging a book by its cover.

Posting to the Love What Matters Facebook page, the anxious mom, who has remained anonymous, wrote a thankful message to the, “big, macho looking guy, in probably your late twenties.” She explains that the moment she saw him she was worried that he would be annoyed at being seated next to a small child.

As it turns out she had nothing to worry about and was pleasantly surprised when he was more than kind. Going out of his way to help with their luggage, retrieve the blanket that her son dropped repeatedly (as toddlers tend to do), and even letting her son rest his little legs on his lap. She thanks him for being so wonderful, writing “Thank you for making our flight experience a lesson in compassion and empathy for others. That little boy will grow into a man one day (hopefully like you) and he will get a lot more out of your simple actions than you realize. You will make a wonderful father some day if you so choose.”

In an even more heartwarming ending to this story, the mystery macho man had a friend recognize him from the post, so he was able to read the woman’s thanks himself and, responded humbly and graciously. “I just want to say, that it was a such pleasure to meet such a loving family. Although he doesn’t show in this picture, the young boy’s grandfather should be the one receiving all this recognition,” he wrote, “At one point, this man held his arm suspended above the armrest for over an hour so that the boy could be comfortable resting his head on it while he slept. Actions like this are inspiring and we should all strive to be like this man.”

Have you ever received a helpful hand with your kids from a stranger? Share your own stories in the comments.