The Unapologetic Truth about Sober Parenting—from a Sober Mom

First of all, it’s hard. Parenting, I mean. Parenting is hard, no matter how you do it. Totally sober or drunk half the time, it’s not an easy job for anyone.

The hardest part of parenting for me is the anxiety. It’s more than just worries. It’s an embodied sensation, a tightening in my gut, a shallowness of breath that used to not go away until I had a drink or two.

Early on in my motherhood journey I would use alcohol as a way to relax at the end of the day, to let go, to finally unwind after all that care-giving.

But after awhile I realized really clearly that my seemingly harmless drinks at night had spiraled into a full-blown addiction. Even though I wasn’t drinking all day long, even though I was only having a drink or two every other night, I didn’t know how to unwind any more without some wine or tequila and I realized I had to stop.

My story is way more dramatic than that, but I won’t go into it here. That’s not the point. The point is what has happened on the other side of the drinking.

What I learned from being a sober mom is that sober parenting takes extra skills. When I stopped drinking, I had to learn how to achieve that calm and relaxed state that booze would give me, by myself. Meditation has been my number one tool. Also nature hikes, yoga, baths, reading, breathing and singing all help. And, although these things are usually not as fun as a few skinny margaritas, they do have their amazing and blissful moments.

Becoming a sober parent also meant I had to face all that emotional stuff I was trying to shove under the rug with my rosé. I found I actually still had a lot of trauma to heal around my experience of giving birth. I had a big pile of resentments I had to sort through. I uncovered wells of grief, rage, anger, sadness, guilt and shame that needed to be sifted through and healed. None of that was accessible when I was drinking to self-soothe. I was suppressing my actual feelings. And the truth is, they really needed my attention.

Once I was able to give my attention to those neglected feelings in a real way through sobriety, things got a lot better. My stress levels went down. My anxiety became totally manageable. I experienced less depression. I felt less overwhelmed. I learned how to actually handle life.

But the best part was this: I became more present and loving to my kid. I didn’t feel like I needed to escape from her or numb out from motherhood anymore. I had actually processed and dealt with my emotional stuff; I had learned how to regulate my anxiety in a real way and I was able to be a way better parent than I was before.

Another truth about sober parenting, though, is that my social circles and activities changed. There was awhile where I was pretty lonely and bored. But then I found other sober mom friends and started to fill my life with healthy activities.

I started waking up earlier and hiking. I started building a cool business that I love instead of feeling overwhelmed and unfocused. I started going out to dinner with whole tables of people who didn’t order drinks and we still had a lot of fun. I started going to meditation groups and finding new connections. I finished and published my book. My life got richer, fuller, more diverse and I got a lot healthier.

All I have to worry about is the normal parenting stuff and how to best take care of all of us, including myself. And yeah, maybe I have to decline a few invitations to Mom’s Night Out to a bar. I have a few friends that I don’t hang out with much anymore because of how deep they are into drinking culture. I have to say no to the delicious-looking stout at the burger place and get a soda or some water instead. But, those are all trade-offs I am happy to make.

Because the truth about sober parenting is that it actually is easier. Now that I have taken responsibility for my own emotions, now that I have learned how to calm down without external substances, now that I have enhanced my life with new hobbies and new friends, everything is better.

I have more energy, more happiness, better health, more interests and a much better ability to be available and present for my child. And that is worth more than any drunken night out or calming night cap in the evening. Being sober has made me a better parent and a better person and that’s the truth. 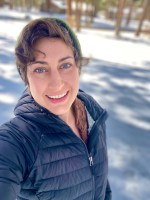 Flow is an Author and Memoir Writing Coach for Womxn. Feeling the call to write your true life story into a book that inspires? Sign up to join a Free Memoir Writing Breakthrough Workshop through her website, and get the clarity and momentum you need to make it happen.
MORE FROM Flow: