What were you doing when you were 11-years-old? Hanging out with your friends? Playing kickball? Inventing a board game? Umm, inventing a board game? Okay, so maybe you weren’t exactly creating a new game to play way back then. Well, these two 11-year-olds are doing just that. And you have to see where they’re selling it! 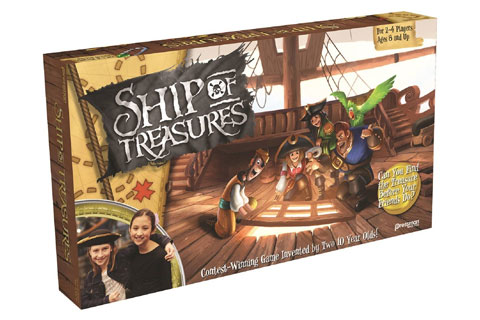 Olivia Wasilewski and Brynna Siewers are just like any other 11-year-old girls. Oh, except the team happens to have created a board game that they’re now selling at Target. Yes. Target!

Last year, when the girls were in fourth grade, they were tasked with dreaming up an imaginative board game. As it turns out, their creation was much more than a project that fulfilled a class assignment. The pair created a game, “Ship of Treasures” and later entered it in the Chicago Toy & Game Fair’s Young Inventor Challenge (which Target sponsored).

Well, the girls won the grand prize. And that meant they got the chance to work with experts from Pressman Toys and Target, and bring their game to life. After plenty of mentorship and the chance to perfect their game, “Ship of Treasures” was ready for its debut. The pirate-themed game is, of course, only available at Target.

Has your child invented something special? Tell us in the comments below.