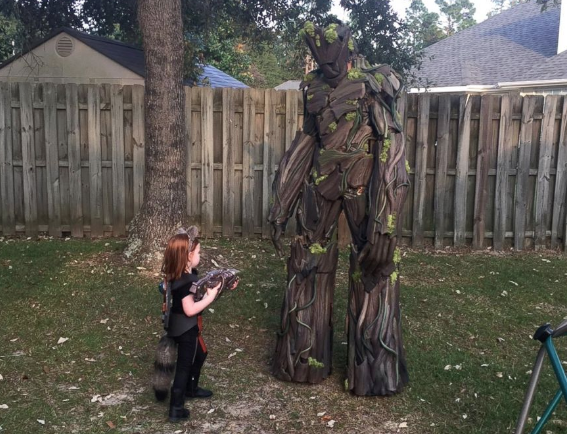 Homemade Halloween costumes are always a fun way to customize your trick-or-treat look, but finding the time and energy for a DIY look isn’t always easy, and it can sometimes result in an epic fail. One dedicated dad, took homemade to a galactic level in order to accompany his 3-year-old Guardians of the Galaxy mega-fan.

This isn’t the first time dad, Tim Burket has gone all out for Halloween. “Our neighbors have come to expect it,” Burket explained to ABC News of the elaborate family costumes he pulls off each year. With his daughter, Amelia Grace being a big fan of Guardians of the Galaxy, Bucket decided to theme their costumes around the movie this year. Amelia will be an adorable Rocket Raccoon and his wife Catherine will be Gamora, but it’s Burket’s own costume that win’s first prize for awesomeness.

His homemade Groot costume is over 7 feet high and took him 302 hours to build. He started working on it in July. “In preparation for that movie, I showed her the first one at home. Everything was Groot and Rocket and Gamora from then on out,” he told ABC News. “She’s got a sassy personality and she really likes Rocket, so she kept telling us starting in June, ‘I’m going to be Rocket for Halloween.” Good thing she didn’t change her mind in the last three months.

Burket had originally planned to dress as Chris Pratt’s character, but his daughter insisted he be Groot since the towering tree is besties with her own character Rocket. It’s hard to say no to that sweet request.

What family Halloween costumes have you come up with? Share your favorites in the comments below.