This Doll Will Help Your Child Sleep (Really) 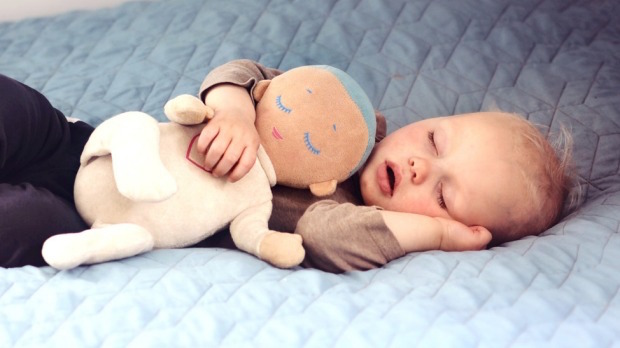 When you’re a sleep-deprived mombie you’ll try pretty much anything to get your tot to stop bouncing off the walls and just go to sleep. If that describes your current situation to a “T”, then you’re definitely going to want to check out this new doll that promises to help your kids (and you) get a good night’s sleep. Read on to find out more about how you can get your exhausted hands on one immediately.

The magical sleep-promising Lulla Doll was developed by an Icelandic mom and psychologist, Eyrún Eggertsdóttir. When the soft doll’s chest is pressed it plays the sounds of breathing and a heart beating, recorded from a real mom. The idea is based on research involving kangaroo care in which infants and small children are soothed by the sounds and smells that mimic a mother. A baby’s own breathing and heartbeat will stabilize in rhythm with the mother’s allowing them to sleep more peacefully (aka much longer).

But does it actually work? According to the rave reviews it’s been getting across the internet, all signs point to yes. The doll, which started as an Indiegogo funded project, exploded onto the mainstream marketplace. While it was sold out for quite a while, and even managed to cause an eBay commotion, with dolls selling for as much as $350 (desperate times), it’s finally back in stock. You can find it on Amazon, where it retails for around $89, or buy it directly from the Lulla website, where there are currently less than 1,000 dolls available, selling for $71 each.

Do you have one of the Lulla dolls and has it helped? Share your experience in the comments!