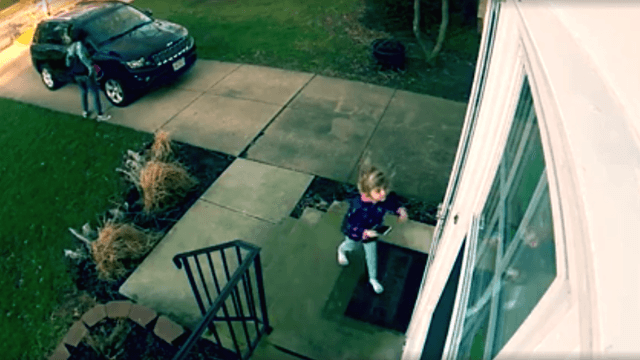 Like many four year olds Madison Gardner was more focused on the smartphone in her hand than what was going on around her. As she attempted to open the front door to her house, a sudden gust of wind slammed it open, sending her on a short flight through the air. The surprising moment was caught on video thanks to the family’s home security camera. Watch the clip and find out more below.

Brittney Gardener, Madison’s mom told CNN, that her daughter was pinned against the siding and that she had to unlatch her from the door handle. Although the whole event was momentarily scary, once she found that Madison was completely safe and unharmed she couldn’t help but laugh a little. At first Madison felt embarrassed, her mom explained, but after she saw the surveillance video of herself, she was laughing too.

The Gardners decided to share their scary (but ultimately hilarious) moment and posted the video on Facebook to the tune of Frank Sinatra’s “Come Fly With Me.” She might not have future as a pilot, as her mom assures the interviewer, but a career in comedy is a possibility.

What was your reaction to this surprising moment? Share your thoughts in the comments.