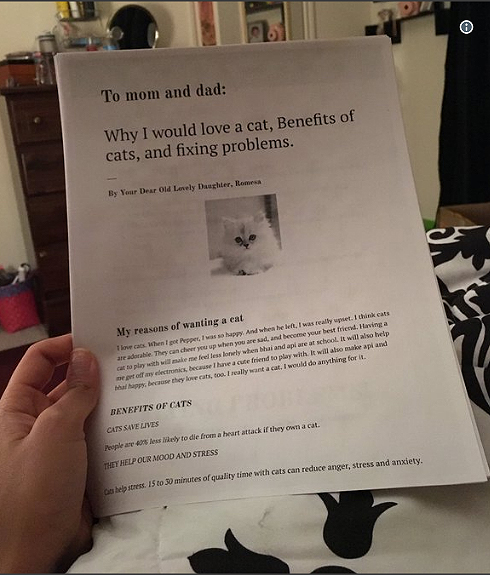 Some kids beg and plead to get what they want, but Romesa didn’t stop there. This little girl ground out a researched, six-page thesis that outlined the reasons her parents should get her the one thing she wants: a cat.

“My 11-year-old sister just typed a six-page report on why we should adopt a cat loooool,” Romesa’s older sister Rimsha wrote on Twitter, alongside an image of the introductory page.

Romesa may have started with “having a cat to play with will make me feel less lonely” and stating she’d get off her “electronics because I’ll have a friend to play with.” But then she hit her parents with a bulleted list of benefits, including how cats give children higher self-esteem, reduce stress and can even warn humans about seizures. 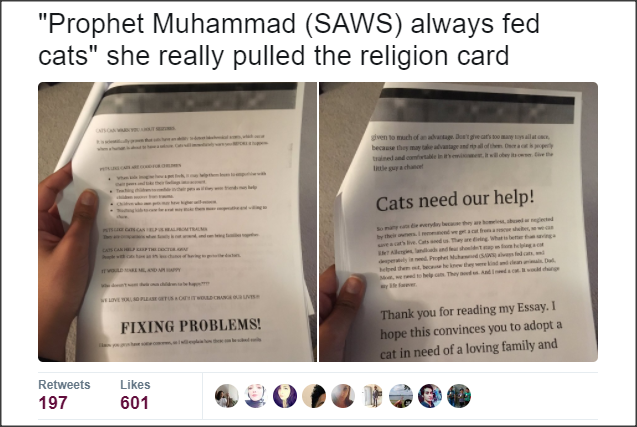 But just in case statistics didn’t win her case, Romesa had one tactic left: appealing to her parents’ hearts… and religious guilt.

“Cats need us,” she wrote on the final page. “They are dying. What is better than saving a life? Prophet Muhammad always fed cats…”

Good luck, Romesa. Cat or not, you get an A+

Have your kids ever gone overboard asking for something? Tell us in the comments below!