What’s the going rate for a lost tooth? Delta Dental has tracked Tooth Fairy statistics for decades, giving parents a peek into what the national averages look like.

According to Delta Dental’s Original Tooth Fairy Poll, the magical creature is paying out less this year than last. The current average cash gift for a lost tooth is $3.70—which is 43 cents lower than what the Tooth Fairy brought a year ago. 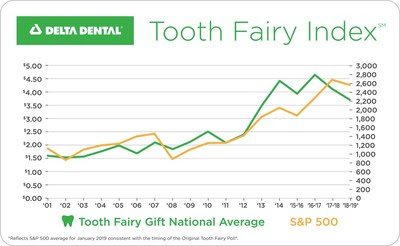 Even though the national average is $3.70, two out of every five parents pay more. Thirty-seven percent of moms and dads admit to giving at least $5 per lost tooth. When it comes to how parents calculate the per-tooth value, the Original Tooth Fairy Poll uncovered a few trends.

Jennifer Elliott, chief marketing officer for Delta Dental Plans Association, said in a press release, “Most parents say that the Tooth Fairy is bringing excitement and joy to their children, with more than one-third of caregivers sharing that the Tooth Fairy instills good oral health habits.” If this isn’t a good enough reason for the Fairy to fork over some cash, we don’t know what is!

These Are the 50 Safest Cities to Raise Your Kiddo

This Company Wants to Provide Sunscreen in Schools for Free