How much should the Tooth Fairy bring? If you’re not sure what the going rate is for a lost tooth, Delta Dental Plans Association’s Original Tooth Fairy Poll has an answer.

The poll, conducted between Dec. 28, 2020 and Jan. 8, 2021, found that Tooth Fairy-related giving is at an all-time high. The average cash gift the Tooth Fairy leaves behind reached the a nationwide average of $4.70! 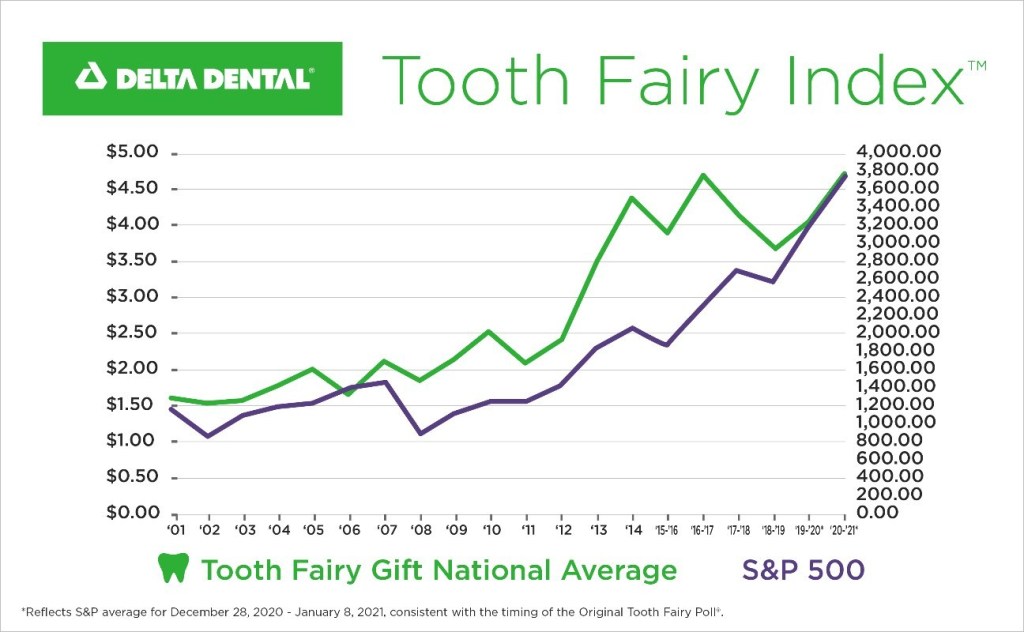 Even though the average under-the-pillow cash gift was just under a whopping $5, the magic number did vary depending on the geographic area. Kiddos in the northern United States fared the best with the Fairy in 2020/2021, with an average cash haul of $5.72. This was followed by the western part of the country, with an average pay-out of $5.54. Across the southern United States, the Tooth Fairy’s average gift is $4.45.

Of the poll, Dave Hawsey, vice president of marketing at Delta Dental of Arkansas, said in a press release, “The annual Tooth Fairy Poll is a bit of light-hearted fun to draw attention to good oral care, starting with baby teeth.” Hawsey continued, “Even though the Tooth Fairy is a bit coy about disclosing financial details, she has been known to pay a premium for shiny, healthy teeth that will be used to build her castle in Glitterville.”

The Original Tooth Fairy Poll found more than just an increase in the going price per tooth. The poll also uncovered a similarity in S&P 500 and Tooth Fairy trends. In the past year the value per tooth increased by 17 percent. This aligns with the 19 percent S&P 500 growth over the same period.

Did the Tooth Fairy Forget to Visit? These Kits Will Save the Day

5 Things Every Parent Should Know about the Tooth Fairy