By now, chances are that you’ve already heard of Julia, a Muppet with autism on Sesame Street. Well it looks like Sesame Street is more than doing its job when it comes to helping kids better understand autism.

Sesame Street has helped plenty of us parents and our kiddos over the years with its approachable knack for fostering acceptance and understanding. A now-viral series of tweets from the parent of a child with autism shows just how incredibly helpful and powerful Julia is IRL.

Swim class: "He's silly!" the little girl says, pointing at my kid. "I want to play with him."

"Be gentle," says her grandmother.

"I saw on Sesame Street," and she jumps beside my spinning son.

Recently, parent and Twitter user “Ship” tweeted about an experience with her four-year-old son at swim class, when a little girl came up to her son as he was stimming—a shortened term for “self-stimulatory behavior” such as repeating words, humming, flapping, rocking or spinning that is common among people with autism. Rather than poke fun, the girl revealed that it was Sesame Street’s Julia to go up to him.

Ship continued in a lengthy series of tweets explaining why she was at first against the idea of a Muppet with autism, but then opened up to the possibilities it could bring her son and other kids like him. 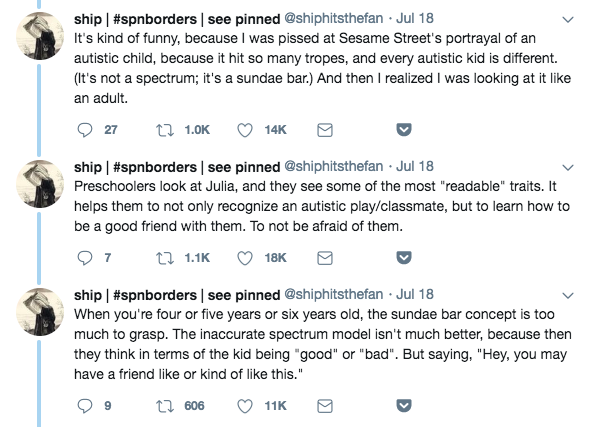 Ship’s tweets received loads of positive responses, many of which came from adults with autism.

Adult on the spectrum here. When I watched the episode and heard the word "autism," I had tears streaming down my face. Never thought I would hear that on @sesamestreet, and it broke my heart to think how different my life would've been if this awareness existed when I was a kid.

I had the diagnosis at age 11, but people didn't know anything about autism back then, so having the diagnosis didn't help a lot, sadly. I just knew I was different, and "different" was bad, according to my peers. Having representation in ANY form would've meant so much…

Other parents with children on the spectrum also chimed in their support and gratitude at having such meaningful representation for their kids on a show as big as Sesame Street.

I was a little worried when they first introduced her to the local autism school students (before she went “live” on Sesame Street) bc she seemed like she might just reinforce stereotypes, but having watched multiple vids now & seen kids respond I think she’s a positive addition.

My son is 20 & autistic. He was nonverbal until around 9/10 and no one ever understood. It was a long and lonely childhood and it is a struggle, socially, as an adult, no matter how much love my hubs and I gave him. I’m so glad there is representation now 💙

Diverse and inclusive representation in media is so important for kids to not feel marginalized by their identities or experiences—and clearly, Julia’s representation for the autism community is making tremendous positive impacts for kids both within and outside of that community.

Red Tricycle > In the News > Viral & Trending > This Mom’s Viral Tweets about Julia, the Muppet with Autism, Are So Important