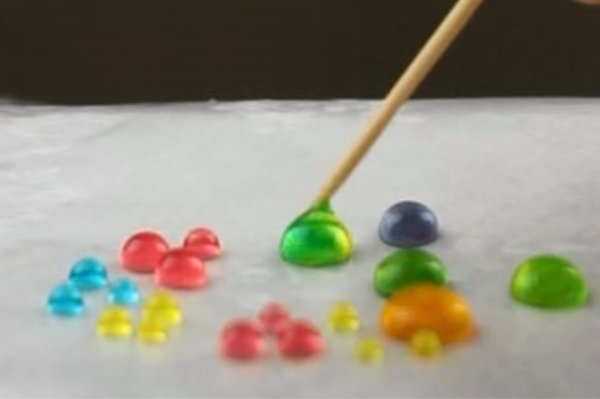 A couple months ago I had one of those afternoons where two friends needed emergency babysitters at the same time. The weather was bad for outside play, and we had seven kids cooped up indoors, ages 3 to 11. Naturally, not everyone wanted to play the same game and certain people insisted that toys belonged to them and no one else…

Needing a few minutes of peace, I cut up a sheet of waxed paper and put droppers and cups of colored water on the kitchen table. Then I handed each kid a toothpick with a bit of soap on the end and said, “Have at it.”

They’d all seen this particular surface tension activity from one of my science mom videos already, and I expected them to explore for maybe five minutes or so and then trickle away from the table. But, to my surprise, all seven kids were captivated for a full thirty minutes. It was rather marvelous to overhear the questions and discussions they had as they played. The 3 year old was fascinated by mixing the droplets of colored water to make new colors. Other kids pretended that they had magic powers to “pop” the surface tension of their water with soap. One person discovered that if they let a “popped” water droplet run into another one, it would flatten instantly, and then they all had to try it.

It was one of those win-win moments where a frantic idea ended up being the highlight of the afternoon. And the soap-powered science fun doesn’t need to stop with droplets on waxed paper–you can race paper boats, scatter spices, and float pins or paperclips and then make them sink “by magic,” all with supplies you probably have in your kitchen cupboard.
You can see each of these activities–and learn how they work–in Science Mom’s Guide to Water, Part 2: 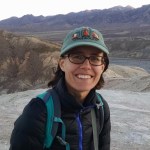 Jenny has worked as a molecular biologist and a wild land firefighter, and at plenty of other jobs that fall inbetween wearing a labcoat and weilding a chainsaw. When not working on videos for her YouTube channel (Science Mom), she can often be found plotting the family's next camping trip.
MORE FROM Jenny:
Website, YouTube Channel
Red Tricycle > Spoke Contributor Network > Watch This Cool Soap-Powered Science Trick I Taught My Kids When the Babysitter Bailed