We are a little bit scared of our toddler… 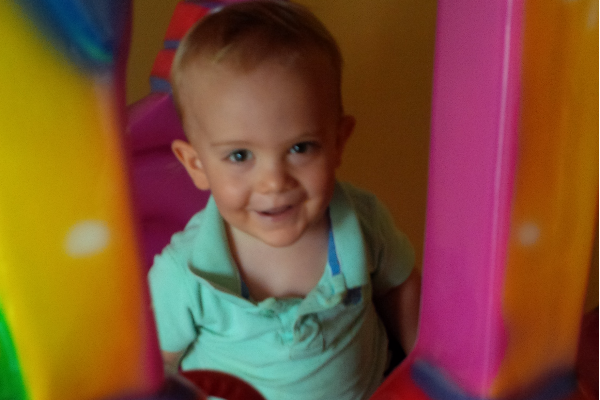 I have a secret to share… well, it might not really be much of a secret amongst parents of toddlers out there but it’s hard to say out loud nonetheless.

We are a little bit scared of our toddler.

Don’t get me wrong. He’s a lovely kid. Face like an angel, butter wouldn’t melt in his mouth and a killer smile much like his dad. But don’t let that fool you. In an instant, without warning, this kid can turn from happy, bubbly, smiling and singing to crying, possessed, and screaming like a banshee crazy. This has made us both a little scared of him.

And I think he knows it.

We try really hard to take a hard line on some things.

The other morning, we were in the kitchen. He asked for toast and I was in the process of making it for him when I made the fatal error of opening the fridge. With this kid, if there’s anything within his eye line that he remotely wants, he will obsess about it until you either give it to him, he has a nervous breakdown, or you do.

On this particular morning, I knew immediately that I had made a crucial mistake when I opened the fridge and then heard the pattering of his little feet coming up behind me as he screamed “DUCE” (which is toddler speak for ‘juice’)

My heart sank. It was such a nice morning. We were so close to getting out the door without any craziness. I could almost see the finish line of leaving the house and entering the lift tantrum free. Victory was within my grasp.

But it was all over.

“We aren’t having juice this morning sweetie” I explained as I tried to close the fridge. Almost immediately, the mood escalates to psycho! Next thing I know he’s trying to grab the door and fling it open. When that fails, he lies on the floor screaming and thrashing his feet all the while sobbing over and over “DUCE… DUCE… DUCE”

The easy thing to do in this situation would of course be to give him some juice.

But no, mummy wanted to teach the lesson; play the hard line. And there we were 15 minutes later trying every tactic in the book to get out of this crazy situation; Ignoring; threatening that his daycare lady would be mad; counting to 3. We settled on time out in his room which worked – for this time.

But each one of these incidents slowly wears away at our resolve of being good parents. That resolve that you create in your head before you have kids where as a young thirty-somethings, you see every kid having a tantrum at the supermarket and swear that your kids won’t behave like that.

And I think he senses our fear.

When we are in a situation where we can feel the crazy switch going on, we have started engaging the emergency exit release way too quickly. I frequently hear myself back-peddling and saying things like “okay, just one – yes?” and “no, don’t do that – oh well, okay maybe just once but that’s it!” I know that he can hear me cave before the words are even out of my mouth.

Lovely hubby tends to go with the risk mitigation approach.

He will try and bargain upfront for the trade off before even providing the opportunity to get into a bad situation… “Well, if I give you the biscuit then you have to have a shower with no screaming – ok?” The other night, I heard an exchange at the dinner table that went something like this: “Just one more mouthful buddy. C’mon just one. Last one. Okay okay, no, don’t worry; you don’t have to have anymore its ok. No, stop throwing it, Henry… Henry… Ohmigosh EMMA!! HE’s your son!!!”

An all-too common occurrence. It’s as though we suffer post traumatic stress disorder and keep having flash backs.

The other morning, there was a heated exchange at dressing time. Lovely hubby is suggesting a t-shirt to the Crazy Chubs. “Here Henry.. put this on mate”… he immediately arks up “NO DADDY… Don’t like that one”. Before the words are out of his mouth, we’re having a harsh whispered exchange of “don’t worry about it, he can just wear his pyjamas”… “No but, what’s he going to wear to bed tonight”… “Just leave it, it’s not worth it” as we frantically try to dampen down the fire before being faced with yet another morning of screaming, crying and fist pumping.

It’s amazing what you will compromise and how heated your discussions can get about what you think the other person should be compromising to try and keep your lives on an even keel.

The other tactic that lovely Hubby tends to employ is the distraction approach. Just this evening, the bed-time situation was degenerating before our eyes after we had read 4 books and he wanted to keep going. That might sound harsh on our part but this kid is a master bed-time evader and if we let him, he would just keep going and choosing another book. We’d be asleep before he was I think sometimes.

So we bargained upfront with the old line of “just one more story then it’s bedtime ok?” And he wilfully agreed only to start yelling “Gruffalo, gruffalo” before even finishing the final line of the story we were on. So once again, we went the hard line and said no as we closed the curtains and followed the usual pre-bed routine, all the while hearing this little voice get louder and louder.

Enter Lovely Hubby with the distraction technique of laughing and poking him into submission. This started out very badly with wails of “NO.. go away Daddy” and my heart sank at the prospect of an angry bed-time. But credit to lovely hubby’s persistence. His somewhat annoying distraction started to work and Chubs started to giggle. Slowly, he started to calm down and the Gruffalo faded into the memory. He still ended up yelling “go away Daddy” as his last words before bed, but at least we weren’t faced with ten minutes of crying, cajoling and thrashing about to finish the evening. A small victory for parent-kind!

We will keep trying new techniques, following the advice of various toddler tamers and try different tactics to laugh, cajole and bargain our way out of everything.

But I just know that, at the end of all these dramas, when the tears have been dried, the yelling has stopped and there are cuddles all around, I have seen a devilish little smile and a glint in his eye that says “I own you people”.

No way little man. There are still parents in here somewhere.

And we’ll get right back to that firm parenting caper right after I finish pouring your juice – ok?

I'm a Dubai expat mum and I love to tell the funny side of life here and about travelling the world with a young family.Because let’s face it – no matter how well planned your travel journey, its those those funny, quirky moments that appear out of nowhere that create the real memories.
MORE FROM Emma:
the perils of the family road trip, escape life for a while, important things to know as an expat parent
Red Tricycle > Spoke Contributor Network > We are a little bit scared of our toddler…