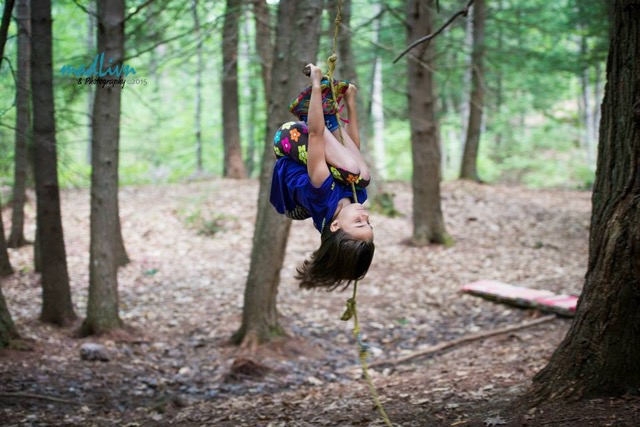 Angela Hanscom was practicing occupational therapy with children when she had an “Ah-ha” moment.  Almost all of the activities she was prescribing to treat children with sensory, attention, or balance issues were things that children could and should be experiencing on their own.  Climbing, hanging, spinning in circles – these used to be the hallmarks of a child’s experience.

“The occupation of a child is play,” she said. Why were they not doing these things on a daily basis?

This discovery led Hanscom to take a close look at the lives of the children around her – at home, at school, on the playground, and on the ball field.  She visited schools, sat in on classes, and watched kids in their everyday “habitat.”  Kids were squirming, having trouble paying attention, or wanting to climb where they weren’t supposed to climb.  And what were adults doing?  They were telling these children to sit still, pay attention, get in line, and stop moving.

Well-meaning educators, coaches, and parents were basically telling kids not to do their job.

As an occupational therapist, Hanscom’s expertise is in looking at an experience that a child is having and breaking it down to see how it is benefitting that child developmentally (or not).  Children, she says, will naturally seek out the movement they need.  That might mean spinning (which actually aids in developing balance) or jumping up and down.  Her opinion, which is backed up by strong research in her new book Balanced and Barefoot, is that lack of active free play is actually doing harm to our children.

“How many kids,” she wondered, “would need occupational therapy if they spent more time moving their bodies the way they need to?”

Active free play, as defined by Hanscom, is free play that is not restricted by the rules or objects created by adults.  It is child-directed, ideally in nature where kids can come up with their own ideas about how to interact with each other and with the world around them.  Thirty years ago, according to Hanscom’s research, the average child had about 4-5 hours of this kind of play during the day; now that number is down to somewhere between 45 minutes and 1.5 hours.   She believes this drastic change is connected to increased issues with things like regulating emotions, reading, and sensory integration.

Parents and educators are beginning to take note of Hanscom’s ideas.  She has been featured multiple times in The Washington Post and was named a “Hometown Hero” in Glamour Magazine’s 2015 Women of the Year issue.

“When educators and parents hear that they might actually be harming their children by making them sit still or telling them to stop spinning, that’s when they begin to really listen,” says Hanscom.

Hanscom wanted to make sure that once people starting thinking about these ideas, they had an opportunity to learn how to put them in action.  That idea is at the heart of her new book.  She named the book Balanced and Barefoot because she wanted to convey the strong visual image of a child running around barefoot outside as the quintessential picture of active free play.  “There is nothing like seeing the child out there playing to help parents understand the value of the experience” she says.

Transitioning to this kind of child-led approach takes patience and practice, Hanscom says.   Children need a lot of time outdoors to begin to explore their surroundings in new and creative ways, and adults need to be patient with children as they learn to play in a less structured environment than what they are used to.   Friends are also key.  “Every chance I got, I invited kids to come over for the whole day,” says Hanscom about helping her own daughter to develop these skills.  With friends, children are more apt to try new things, and to seek reassurance from adults a little less often.

Hanscom also took action on her ideas when she created TimberNook, a developmental nature program in the US and in New Zealand that offers the opportunity for virtually unlimited, child-led sensory experiences in nature. TimberNook uses a unique approach from other more traditional nature programs by focusing on using the environment to foster healthy child development – both intellectual and physical – with minimal adult intervention.

“Is summer camp enough?” I asked Hanscom as I listened to her passionate arguments.

“We are a living example,” she answered, “of what can happen when children are given the opportunity to develop their free play skills. When I show a parent a video of what their child did while they were at camp, or a child goes home and tells their parent how much fun they had and helps the parent to recreate a TimberNook play space at home, that’s how we’re making the difference.”

Hanscom says that teachers and parents often tell her that they “couldn’t put a finger on” why kids were having some of the challenges they were, but that learning about the value of free play lights a spark that makes people passionate about trying new things.

She describes Barefoot and Balanced as a message packaged into book form.  She hopes that parents will share it with teachers and that the movement will spread into multiple settings.  “There are a lot of barriers out there to making these kinds of changes,” she says, “but we should do everything in our power to keep educating.”

ABOUT THE WRITER Carrie Williams Howe
The Happy Hive

Carrie Williams Howe is the Executive Director of an educational non-profit by day, and parent, writer, and aspiring homesteader by night and weekend. She lives in Williston, VT with her husband, two young children, and a rambunctious border collie. Carrie writes about family, food, parenting, and homesteading.
MORE FROM Carrie:
Raising Kids With a Movement-Based Lifestyle: An Interview with Katy Bowman
Red Tricycle > Spoke Contributor Network > What I Learned from an Expert about How Free Play Helps Kids to Thrive