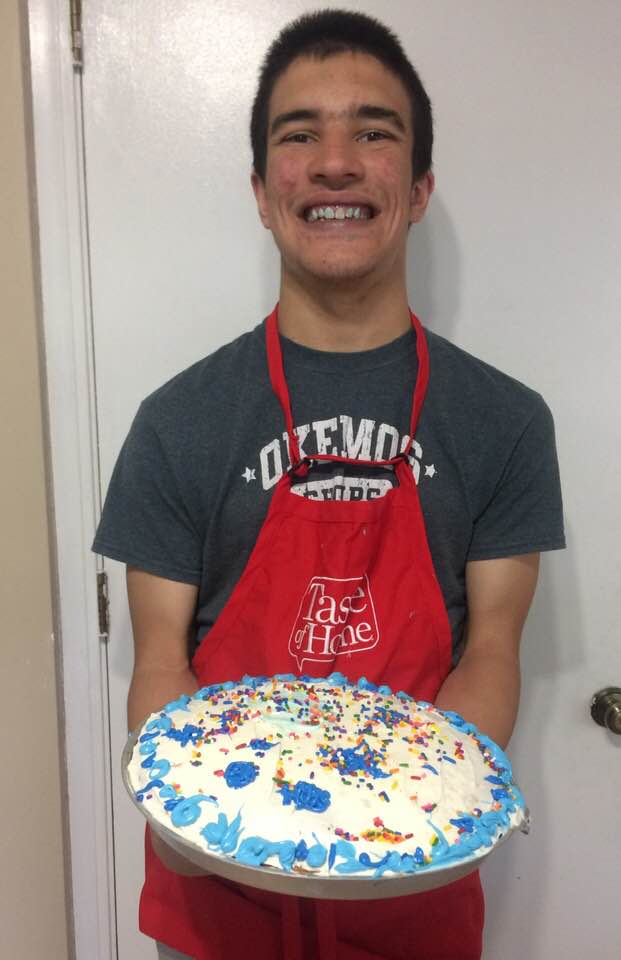 Before this pandemic took over, Dominic, who recently turned 16, was pretty “set” in his ways. Trying anything new and out of his “comfort zone” was not anything at all on his radar screen. As are many on the Autism Spectrum, changes in Dominic’s routine are not always easily accepted.

Since we are living in a different world now, I have used this time with Dominic to not only work on his social skills but to also try new things. When the opportunity to sign Dominic up for a “virtual” music camp in June arose, I really had no expectations that he would be engaged and participate. We had tried this particular camp in-person and it was too overwhelming for him and I never signed him up for it again. Much to my surprise, he LOVED it!! The camp had just the right mix of breaks and participation.

Based on that positive reaction, I signed him up for another camp similar to the one he did in June. The “Showcase” is this coming Wednesday night and Dominic will be singing, “Happy” by Pharrell Williams. Dominic has been in the choir at school for several years, but there has been more than one time he hasn’t sung, like not at all. I am hopeful when he does go back to school in-person, he will have gained the confidence to sing every time he is on stage!

Since just about every activity has moved on-line, when I saw on Facebook that the Food Network along with some other sponsors were offering free cooking classes, I signed Dominic up for three. He made Chicken Barbeque “Pizza,” with Rachael Ray; Chicken Parm with Angel Hair Pasta with Andrew Zimmern, and yesterday, he decorated a cake with Buddy Valastro.

Typically, when we decorate a cake, I only let Dominic do the “sprinkles.” I have learned these past several months, to loosen the tight control I have on Dominic. That grip was real tight at the beginning of the pandemic because he had three seizures within the first month, caused by his Epilepsy (he has had 13 seizures in total, since being diagnosed in 2015). Since he has been seizure-free for over three months, little-by-little, I am making progress and loosening that tight control.

A huge lesson that I have learned having Dominic with me during this time of the pandemic is that he has to learn to adapt to this world, the world isn’t going to adapt for him.

Speaking of going outside Dominic’s “comfort zone,” I asked an artist friend of mine if he would be willing to give Dominic private art lessons. Those start this coming Wednesday. I will keep you updated!!!!

I am a stepmom to one and a mom to two. I have been a stay-at-home mom for almost 24 years. Grew up in Maryland and have lived in Michigan since 2001 when my husband got a job here. My 15-year old son has special needs.
MORE FROM Catherine: