When are Kid Birds Ready to Fly? 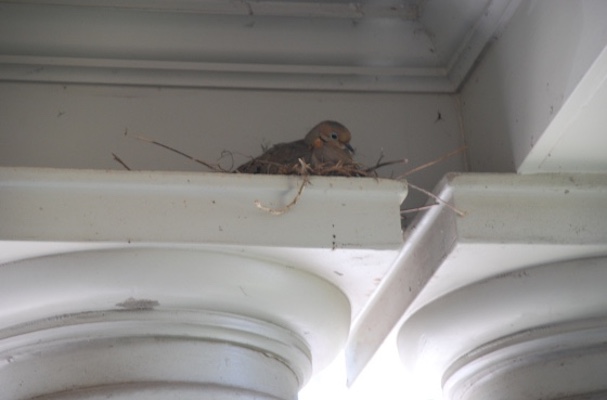 Laying upside-down on the piano bench, my six-year-old son made the most startling discovery: Our family was expecting… baby birdies!

Sure enough, a mourning dove had hid her nest above the columns on our front porch. As if under a spotlight, her nest appeared only because we all stopped to take a look at the world more like a child — upside-down.

It wasn’t long before the two eggs hatched, and the baby birds discovered their wings. We watched as Mommy Mourning Dove lovingly foraged for and fed her birdies. All of us were fascinated over the equal role of the Daddy Dove as he, too, came home to do his part.

Each moment was quite special — but what struck me most was how quickly it all happened. Once the babies arrived, their nesting phase only lasted about two weeks.

In fact, we may have given our birdies a premature push into the world. In my son’s eagerness to see the birds, he burst open the door and rattled one baby bird into taking its first flight. We watched in grief as the mommy bird came back home, then the daddy bird too, only to find one little birdie left. And then the next day, we were sad to discover, they were all gone.

These mourning doves got me thinking. If a mourning dove’s “childhood” lasts around two weeks, just how long is a human’s childhood? By age six, a child can be mostly self-sufficient. My six-year-old loves to cook and prep the dinner vegetables. He now jumps at the chance to take a shower on his own. He cleans his guinea pig’s cage (although not without making a mess) and loves to tend his garden. But when it comes to organizing his schoolbag and putting his shoes away, well, that’s something we’re still working on.

Just when I begin to think childhood is much too short, I go to a parenting class and find out, it’s actually the opposite–it’s now too long! The big class takeaway: Today’s generation doesn’t grow up until they have their first child. Today’s kids are what one author calls “artificially mature.”

This new delayed entrance into adulthood is the premise of author Tim Elmore’s book Artificial Maturity. As he points out, Americans say they have their first real adult responsibility when they have their first child, which on average is 27.5. Oh no. We, Americans, have a lot of growing up to do. It seems we’re so busy pushing our kids into classrooms at earlier ages, giving them all the academic advantages in life but fewer of the necessary life skills.

I’m embarrassed to say this, but it wasn’t until I had my second child at age 34 that I started to make regular home-cooked meals. (By this time, I had put my career as a television producer on hold.) Somehow, I’d survived most of my twenties on cereal, sandwiches and salads. Yes, it’s sad, but true. By my fourth child (age 38),I’m happy to say I’ve mastered the art of meal planning, because I had to!

This isn’t about being able to cook though, this is about making sure your kids can emotionally survive in a dog-eat-dog world. Because the last thing the world needs right now is a workforce of kid-adults having meltdowns.

What is the best measure of a child’s maturity? Instead of IQ, the new measuring stick is EQ, emotional intelligence. If your kid has a high EQ, apparently, it’s quite rare so give yourself a GOLD star! If your child may be on the other end of the spectrum, you’re not alone, and it’s time to get in tune with your child’s emotions. Here’s a good start:

Daniel Goleman, author of Emotional Intelligence: Why it Can Matter More than IQ, describes five parts to emotional intelligence—each part contributing to one’s personal success and sense of well-being. I’ve adapted them below with questions to make it easier to evaluate your child. Think of it as assessing your kid birds’ readiness to fly so they’re one day ready to leave the family nest:

If you answered yes to most of the first questions and no to most of the second questions, you’re on the right track. If not, follow me on Mommipop as I work on building my children’s EQ — because I can’t afford to have four kids nesting until age 27.5!

And guess what? Once again, we’re expecting a few more birdies just in time for Easter. Mommy Mourning Dove is back. Turns out, mourning doves are a lot like me —prolific breeders with five to six broods per year. To be honest, I can’t tell if she’s the same one or a new mama bird. We’ve been watching her nest closely, because we know their time with us is short. Two weeks after hatching, her birds will likely be ready to take flight. I’m so thankful to have more than two weeks to teach my kids to fly!

A former CNN journalist, I created Mommipop, a destination for moms. A mother of four, I now write and share the parental pep talks, the sisterly pick-me-ups, and the intellectual tickles every sleep-deprived mom craves. Mommipop stories put the “pop” back in mommihood, because everyone is better when mom is in a Mommipop state of mind!
MORE FROM Emily:
You Can Learn A Lot From a Grandma and a Killer Whale, The Mom Who Gave Up Her Job as a Professional Sleeper, End the Mommy Wars in Your Head
Red Tricycle > Spoke Contributor Network > When are Kid Birds Ready to Fly?