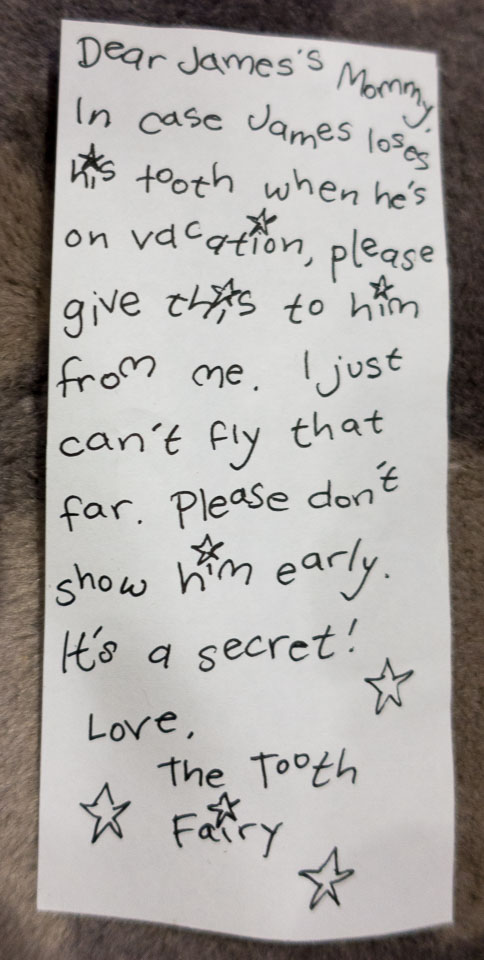 One day, unbeknownst to me, James was rifling through my office drawer full of future gifts for him and his twin sister, Julia. He didn’t realize there were secret things to be found there, but suddenly he ran into the room where I was sitting, victoriously holding aloft a dollar bill covered in gold glitter, folded into a fighter jet. My heart sank.

“I know you’re the Tooth Fairy!” James announced with a huge grin. My mind was racing. He had found the Tooth Fairy loot I had originally prepared when he had lost his first tooth a week before but, because of my incompetent folding, tossed aside in favor of four quarters, each covered in different colors of glitter. I didn’t see HOW I was possibly going to talk myself out of this. In case I was about to give him the speech about the real identity of the Tooth Fairy, I shushed him so Julia might still have a fighting chance of believing in her little dental sprite. Right then Julia rushed in and told us, “We’re all ready for Uno!” So, just before heading into the family room to play I whispered to James that I would tell him the truth after the game.

The whole Uno game all I could think about was how could I possibly get out of this and still have James believe in the Tooth Fairy, when suddenly I got an idea. Thankfully I won Uno and while the rest continued playing until everyone was out of cards, I ran back into the office with our future trip to Canada in mind to make some preparations.

When James’s Uno game ended I took him aside, and asked, “When you found the plane did you see the note that was with it?” He said “No” so I told him, “You missed this then,” and I pulled out a note. It was from the Tooth Fairy.

For believability I added that the Tooth Fairy gave my mother a similar note when I was James’s age and went to Hawaii with my grandparents. I told him that I was just trying to keep the Tooth Fairy’s secret.

James went along with it. For now. But ever since I was forthcoming that leprechauns weren’t real, it’s opened up a real can of worms with regards to the pretend trinity of Santa, the Easter Bunny, and the Tooth Fairy. (I had no idea that teachers and other parents had collectively decided that leprechauns were real. A heads up would have been nice.) Since then the kids have been doubtful about all of them, often asking if it’s me. James has even compared my handwriting to Tooth Fairy handwriting.

James ended up losing his second tooth on our second to last day in Canada and he finally got his glittery fighter jet. 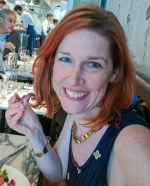 ABOUT THE WRITER Kathleen Mikulis
Eating for 3: How Our Twins Came to Be Our PillOffspring

I’m a mom to 7-year-old twins, Julia and James. At my kids’ age I started memorizing world capitals for fun (that’s normal, right?), and eventually became a cartographer. I love foods from around the world (Ethiopian or Burmese, anybody?) and going to afternoon tea (more for desserts, less for tea).
MORE FROM Kathleen:
EATING FOR 3 or How our twins came to be our PillOffspring
Red Tricycle > Spoke Contributor Network > When Your Kid Starts to Suspect the Truth Behind the Tooth Fairy