Who Is Marlon Bundo? This Children’s Book About Gay Bunnies Is a Bestseller

If you’ve turned the news on this week or simply heard it in passing, you might think The Godfather was coming back in book form. But no, you’re not hearing about the late actor Marlon Brando—no, no. The news is abuzz about a new kid’s book starring Marlon BUNdo. So, who is Marlon Bundo? He’s the family pet of U.S. Vice President Mike Pence—and who also happens to have his own children’s book, Marlon Bundo’s Day in the Life of the Vice President.

But Bundo isn’t just any old bunny—he’s also the titular character of A Day in the Life of Marlon Bundo, the idea of none other than John Oliver, host of HBO’s Last Week Tonight. And in Oliver’s progressive take on life outside the warren, it’s a far gayer affair—as in literally gayer: Oliver tells the story of a gay bunny rabbit who falls in love and gets married, and who just so happens to share the same name as said family pet of said vice president. 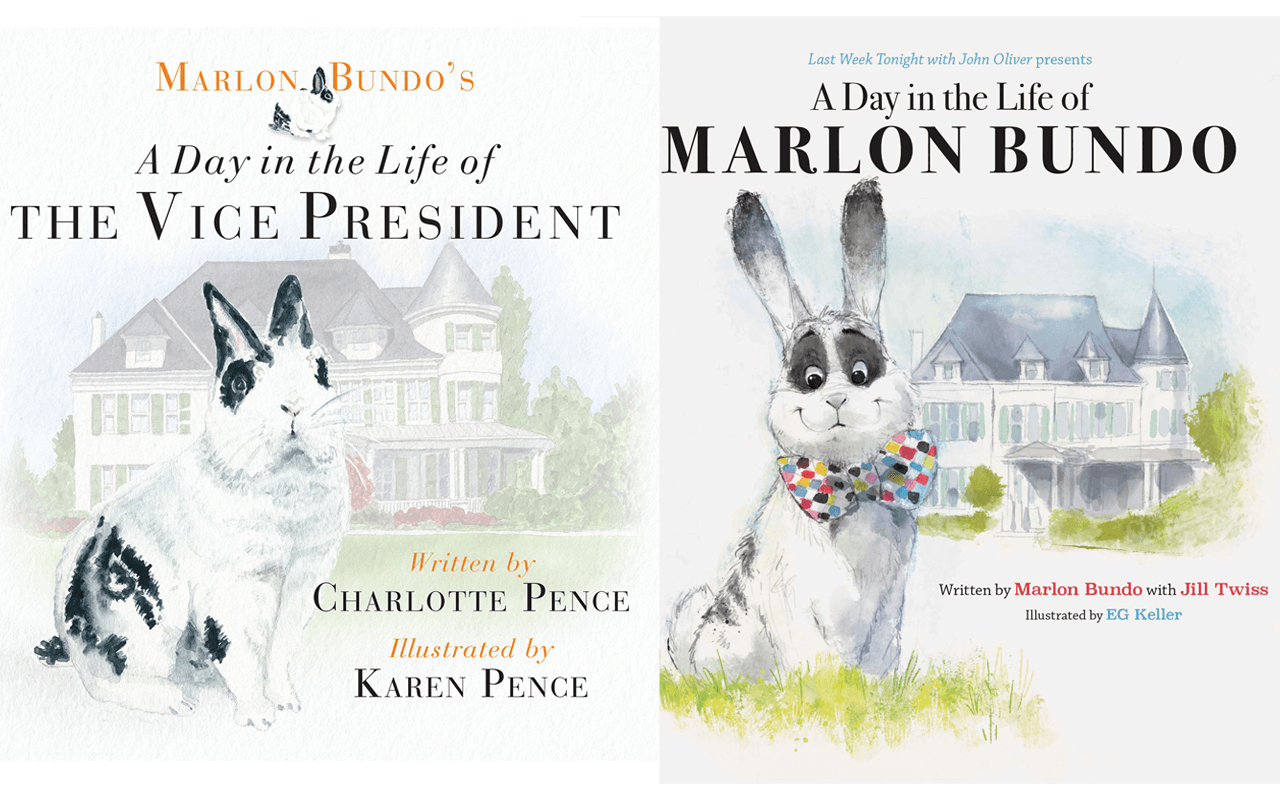 The differences between the two children’s books are pretty striking: In Marlon Bundo’s Day in the Life of a Vice President, Pence’s daughter Charlotte tells the story of their family bunny, with illustrations by the Second Lady, Karen Pence. Marlon Bundo—also know as BOTUS (Bunny of the United States)—has his very own Instagram and has ridden in Air Force Two. But in Pence’s book, his story is about as interesting as you’d expect for an administrative day in the VPOTUS office.

YOU GUYS! My book is out TODAY! Dream come true. Thank you!! 🤗🤗🤗❤️ #linkinbio

Oliver’s take on the life of Marlon Bundo is decidedly more adventurous. In A Day in the Life of Marlon Bundo, the titular bunny meets another bunny named Wesley—and the pair fall in love, as rabbits sometimes do. And when two bunnies fall in love, sometimes they get married. Although it’s a special day indeed when they’re married by a cat named Pajama, who brought her wife as a guest.

The timing of Oliver’s book to coincide with Pence’s book is no accident. Common Sense Media fills in what readers can expect of Oliver’s epic trolling of Pence’s views on LGBTQ rights and same-sex marriage. (The Vice President’s Office did not return Red Tricycle’s request for comment.)

This cute, funny, and inclusive picture book has a positive message about celebrating who you are and loving whom you want. A Day in the Life of Marlon Bundo takes a positive view of same-sex marriage and pokes fun at Vice President Mike Pence, giving The Stink Bug his hair color and style. But young readers probably won’t make that connection.

Parents need to know that Marlon Bundo’s Day in the Life of the Vice President is a picture book featuring real-life Pence family pet Marlon Bundo. it offers a bunny’s eye view of the vice president’s workday.

While Vice President Pence has stayed mum about the “other” Marlon Bundo, his daughter Charlotte is taking it all in stride—because hey, any press is good press, right? Speaking to ITK Wednesday, The Hill reported that not only had Charlotte bought the book, she supports Oliver’s book for its charitable aims. “It doesn’t have to be divisive,” Charlotte Pence told ITK. “I think that everybody can come together over Marlon.”

Proceeds from Oliver’s book will benefit The Trevor Project, a crisis intervention and suicide prevention organization for LGBTQ youth. Pence’s book proceeds will go to Tracy’s Kids, a pediatric art therapy program for children with cancer.

We absolutely love #BetterBundoBook! ❤️💛💚💙💜 Order this beautiful kids book about tolerance and you'll support our lifesaving work, too 🌈

Receive a free e-book when you donate to us: https://t.co/78wyycyd4R 🌟

If you’re hoping to score a copy of both books, you’ll have to be patient to get Oliver’s Marlon Bundo book: it has already sold out on Amazon and is the third most-sold book on the online retailer in its debut week.

Are you a fan of the BOTUS? Which copy are you buying—or are you trying to get both? Share your thoughts in the comments.

14 Banned Books That Should Be on Every Kid’s Bookshelf

Red Tricycle > Fun & Games > Books > Books for Early Readers > Who Is Marlon Bundo? This Children’s Book About Gay Bunnies Is a Bestseller