Why I Think We Should Go Back to Simpler Times

It might surprise most people to know that through most of human history we were hunter-gatherers. For tens of thousands of years we travelled in small bands of “Sapiens,” foraging for our food.

In fact, it wasn’t until the “Agricultural Revolution” about 12,000 years ago that we decided to settle down and became farmers instead of travelers.

History calls this decision “progress,” but I think it was a questionable call. Here’s why we were better off as hunter-gatherers:

Imagine a giant open-air health club with a kick-ass cafe and no parking issues. You may be surprised to learn that such a place exists, and it’s called, “nature.”

It’s true, and for thousands of years we used to travel through “nature” unencumbered; like a bunch of hipster chefs out foraging food for their trendy gastro-pubs.

As hunter-gatherers, we were usually on the move, and didn’t stay in one place for more than a few days or weeks. Our travel was dictated largely by the annual migration of animals and the seasonal growth cycles of plants.

We ate whatever we could forage, and that wide variety of foods resulted in a very nutritious diet. Typical hunter-gatherer meals might have included a diversity of fruits, vegetables, edible roots, nuts, meat and fish. (Yes, it was the “original” paleo diet!)

All that nutritious, low-carb food combined with hours of “foraging” exercise each day meant that our ancestors were in tremendous shape, and the obesity rate was probably zero.

Not only did they probably look like (hairy?) CrossFit athletes, but they were really smart too!

You might scoff at the idea that people were smarter 20k years before Siri and Alexa, but hear me out.

All that foraging made us a lot smarter. Can you imagine the breadth of knowledge it would have required to be a successful hunter-gatherer? Just to survive you’d need an extensive, hands-on education in biology, botany, geography, and meteorology.

In today’s society, most of us specialize in one niche area and depend on the narrow skills of many others to survive. I mean, how much do you really need to know about the earth to sell insurance or design websites?

Sure, as a society we’ve never been collectively “smarter” and more “advanced” than we are today, but as individuals I say we were in our prime as hunter-gatherers.

When we put down roots and became farmers, an interesting thing happened. We stopped living in the present, and started worrying about the future.

Thoughts of foraging for our next meal turned to anxiety about harvests months or even years in the future. We worked harder and acquired more possessions, but we fretted that we might lose them if a single crop failed.

When we stopped traveling, we put ourselves on a road to nowhere. Like Sisyphus, we began perpetually rolling a boulder uphill, only to watch it roll back down again.

To this day it seems like the more we chase “progress,” the more despondent we become. If things have improved so much, why are we so damned depressed?

OK, I’m “cherry-picking” some facts (that’s a little “foraging” pun for you!)

Could I really live in a world that had sabre-tooth tigers, but no flushable-toilets?

Maybe not, but I can’t help think we have a lot to learn from our foraging ancestors. Lately even peanuts and gluten seem to be telling us that we’re doing something wrong, so maybe we should listen.

When we were hunter-gatherers we didn’t have to contemplate our right to “the pursuit of happiness,” because it seems we had already found happiness in the pursuit! 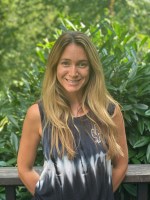 I'm Missy, a mother of three and a middle school drama teacher at a private school. I'm obsessed with my Vizsla (dog), traveling, and the musical Hamilton. I also enjoy writing and sharing fun parenting stories, which is what brought me here.
MORE FROM Missy:
Gorging Gene: How Our “Hunter Gatherer” DNA Is Making Us Fat Now, Service Codes for TurboTax: Get a $20 Discount w/ This Hack!, Nutrisystem Costs Revealed: New Prices Per Day, Week, Month
Red Tricycle > Spoke Contributor Network > Why I Think We Should Go Back to Simpler Times