Why Knitting Sets the Stage for a Career in STEM 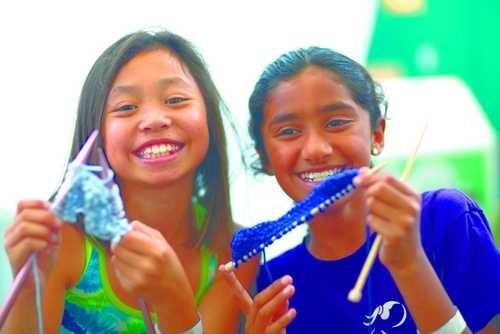 Knitting requires steady hands, a lot of yarn, and, as it turns out, math skills. A new movement is trying to get girls excited about math and science by teaching them how to knit and crochet. Read on to learn about the connection between making scarves and algebra, and how it can influence your daughter’s future.

Home economics is pretty much extinct, leaving very little that’s taught in school about basic handiwork skills like sewing. Researchers are finding, however, that those skills could have some important academic applications as well, especially in math and science. Melissa Gresalfi, an associate professor of math education at the Peabody College of Education at Vanderbilt University is currently conducting a study to determine just how successful textile arts, like knitting, can be at teaching mathematical skills.

The four-year project called KnitLab includes afternoon workshops and summer camps for kids that explore the mathematical world of needlework. Using textile projects, the kids learn about complex math concepts and participate in knitting challenges, like making a knitted square made up of concentric squares in alternating colors, to test their problem solving skills. Gresalfi’s project is focused on middle schoolers, but girls in particular, who have the highest rates of math anxiety and lowest workforce participation in the STEM fields.

The hope is that knitting, which evidence shows is a female-dominated skill, will entice younger girls to take interest in math in a way that other methods have fallen short. While the study isn’t complete, its success could mean that someday your daughter might bring home knitting needles instead of worksheets for math homework. Check out the video to see the project in action.

Do you think girls will be swayed into STEM with knitting? Share your thoughts in the comments!